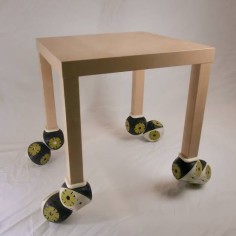 source:biorobepflch
Auke Ijspeert is a full professor at the EPFL (the Swiss Federal Institute of Technology at Lausanne), and head of the Biorobotics Laboratory (BioRob). He has a B.Sc./M.Sc. in physics from the EPFL (1995), and a PhD in artificial intelligence from the University of Edinburgh (1999). He carried out postdocs at IDSIA and EPFL, and at the University of Southern California (USC). He then became a research assistant professor at USC, and an external collaborator at ATR (Advanced Telecommunications Research institute) in Japan. In 2002, he came back to the EPFL as an SNF assistant professor. He was promoted to associate professor in October 2009 and to full professor in April 2016. His primary affiliation is with the Institute of Bioengineering, and secondary affiliation with the Institute of Mechanical Engineering.

His research interests are at the intersection between robotics, computational neuroscience, nonlinear dynamical systems, and applied machine learning. He is interested in using numerical simulations and robots to get a better understanding of animal locomotion and movement control, and in using inspiration from biology to design novel types of robots and locomotion controllers (see for instance Ijspeert et al, Science, Vol. 315. no. 5817, pp. 1416 – 1420, 2007 and Ijspeert, Science Vol. 346, no. 6206, 2014). He is regularly invited to give talks on these topics (e.g. TED talk given at TED Global Geneva, Dec 8 2015). With his colleagues, he has received paper awards at ICRA2002, CLAWAR2005, IEEE Humanoids 2007, IEEE ROMAN 2014, and CLAWAR 2015. He is member of the Board of Reviewing Editors of Science magazine, and associate editor for Soft Robotics and for the International Journal of Humanoid Robotics. He has acted as an associate editor for the IEEE Transactions on Robotics (2009-2013) and as a guest editor for the Proceedings of IEEE, IEEE Transactions on Biomedical Engineering, Autonomous Robots, IEEE Robotics and Automation Magazine, and Biological Cybernetics. He has been the organizer of 6 international conferences (BioADIT2004, SAB2004, AMAM2005, BioADIT2006, LATSIS2006, SSRR2016), and a program committee member of over 50 conferences. Please visit the BioRob Home and BioRob publication pages or have a look at his CV for more information about his research and publications (See also Ijspeert’s Google Scholar Profile).
.
.
.
.
.
.
.
source:
The Biorobotics Laboratory (BioRob in short) is part of the Institute of Bioengineering in the School of Engineering at the EPFL (also co-affiliated with the Institute of Mechanical Engineering). We work on the computational aspects of locomotion control, sensorimotor coordination, and learning in animals and in robots. We are interested in using robots and numerical simulation to study the neural mechanisms underlying movement control and learning in animals, and in return to take inspiration from animals to design new control methods for robotics as well as novel robots capable of agile locomotion in complex environments. We are also interested in rehabilitation robotics, e.g. exoskeletons, and in restoring locomotion.

Our research interests are therefore at the intersection between robotics, computational neuroscience, biomechanics, nonlinear dynamical systems, and machine learning. We carry out research projects in the following areas: neuromechanical simulations of locomotion and movement control, systems of coupled nonlinear oscillators for locomotion control, design and control of amphibious, legged, and reconfigurable robots, control of humanoid robots and of exoskeletons. See the Research pages for more details.
.
.
.
.
.
.
.
source:fastcompanycom
You know what’s wrong with furniture? It just sits there. But what if your table could bring you a banana and coffee when you’re hungover? What if, like an enchanted Beauty and the Beast castle full of spirited ottomans, your chair could anticipate your need to sit?

Swarms of responsive robots that can transform into any kind of furniture at will is exactly what a team of roboticists at the École Polytechnique Fédérale in Switzerland has been trying to accomplish for the past seven years. They’ve created four pairs of robot “Roombot” blocks that can organize themselves into pretty any much shape desired, and this September they’ll start honing the technology for people in assisted living facilities. For those with limited mobility, a table that brings meds or prevents a fall could mean unprecedented independence.

Right now, each of the Roombot pairs, which can swivel and attach themselves to various surfaces, costs around $2,000. They run on lithium polymer batteries and can zip around for about an hour without recharging. But part of the challenge going forward will be to see if the team can reduce the cost. Switzerland’s National Science Foundation will be funding the Biorobotics’ lab three-year investigation into developing the technology for the elderly.

Another major challenge will be finding the best way for humans to interact with the shape-shifting Roombots themselves. The researchers are exploring several options, including tablet interfaces, augmented reality, gesture recognition, and speech recognition, explains Massimo Vespignani, a PhD student working under professor Auke Jan Ijspeert in the university’s biorobotics lab.

The individual Roombots are about the size of fat grapefruits, but one day they could be much smaller. Vespignani and his fellow researchers are investigating ways for the bots to communicate among themselves, like bacteria. In a hundred years, maybe the individual units will be so small as to be microscopic–and instead of summoning 10 friendly robots from different corners of the room, a person could summon something as nebulous and numerous as an army of technological spores.