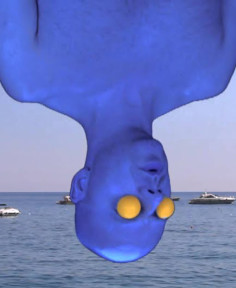 Setzer received his MFA from Ohio University and his BFA from The University of Akron. His works have been included in solo and group exhibitions nationally and internationally. He has performed, exhibited, and screened work in venues such as the Arsenale in Venice, the Today Art Museum in Beijing, Tribeca Film Center, The National Art Center Tokyo, Los Angeles Center for Digital Art, Museum of Contemporary Art Tucson, Ars Electronica, Mobile Museum of Art, The Wexner Center for the Arts, Boston Center for the Arts, Tucson Museum of Art, and the Cincinnati Art Museum. In 2012, Setzer released the soundtrack for his performance, Supralingual/Sublingual: The Tongue is the Terrain, on the independent label Pretend Records. From 2010 until 2015, Setzer was awarded the Louise Foucar Marshall Professorship. This five-year endowed chair position recognized Setzer’s contributions to the field and was funded by the Marshall Foundation. He currently lives and works in Tucson where he is an Associate Professor of Art at the University of Arizona.

Gary Setzer is currently represented by Los Angeles Center for Digital Art.
.
.
.
.
.
.
.
source:integrativeteachingorg
Gary Setzer is an interdisciplinary artist who currently lives and works in Tucson, where he is an Assistant Professor of Art and the First Year Experience Division Chair at the University of Arizona. His performances, installations, objects, and videos have been exhibited and screened extensively. Setzer has recently toured his new performance work, Supralingual/Sublingual: The Tongue is the Terrain, across the United States. With stops in New York, Brooklyn, Chicago, Philadelphia, Pittsburgh, Denver, New Orleans, and Austin (among others), he provided gallery audiences with what the Huffington Post called “a phenomenal hybrid of his own, integrating video, music and performance.” In 2008, Setzer’s performance work, Simultaneous Repellents (Repressed Sentient, Oppressed Séance), debuted in London at the Slade School of Fine Art. In May of 2010, Setzer received the Louise Foucar Marshall Professorship—a distinguished honorary title and award. Setzer recently transformed the University of Arizona’s traditional Foundations program into a sophisticated initiation into contemporary professional studio practice. In the new First Year Experience program, eight-week modular workshop courses replace semester-long studio courses. Undergraduates choose six of the eight workshops to fulfill First Year Experience program requirements.