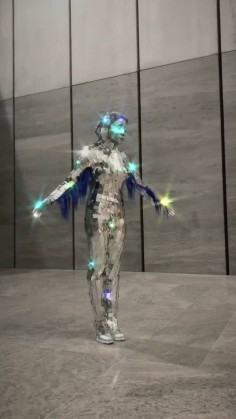 source:vimeocom
The Olive Tree
SamMao
Don’t ask me where I’m coming from
My hometown is far far away
Why do I wander so far?
Wandering in the distant land?
For the little birds that soar through the sky
For the creeks that rush between the mountains
For the endless grasslands
Wandering afar, wandering
Also, also
For that olive tree in my dreams, that olive tree
My nick name was “丑丑/ Shou Shou” meaning ‘ugly ugly’. I was very thin with soft yellow hair. Everyone used to say the reason I am so ugly is because I am a premature baby and my mum was too ill give me enough vitamin which makes my mum cry when she heard it. I spend most time with my grandma when my mum was working. Grandma’s foot was injured from the feet binding so she couldn’t run, she bought me a little red ball and that was the most precious thing in my childhood.
My birth name is Xie Rong. A family name from my granny Xie and a given name of my mum; both of whom eventually divorced. I felt, I carry two single mothers on my shoulders. I am Rong ‘蓉’the confederate rose, I grew up in tears. In 2000 I begin to use the name ‘Echo’ to write articles for news paper.
“Don’t ask where I come from, my home is far, far away. Why do I wander so far? Wander so far, because of the olive tree in my dream.” That was: The Olive Tree, written by Chinese author San Mao, recorded in an album called ECHO 1979. San Mao’s English name is Echo and she went to 54 countries in search of her own home. In 1976 she published her first work, the fictionalised- autobiographical The Stories of the Sahara (撒哈拉的故事). Her writings continued to be published from that point on, and her experiences in the Sahara and the Canary Islands were published in several more books. In 1991, at the age of 48, San Mao died in a hospital in Taipei, having hanged herself with a pair of silk stockings.
I didn’t name myself Echo because of her, but I share the “home is elsewhere” believe with San Mao. I took “Echo” from the Greek mythology. The nymph who loves telling stories but her voice being taken away by Hera; The nymph who can only repeat others voice. The nymph who died of broken heart.
Thank you:
Jamie Baker, Museum der bildenden Künste Leipzig, Alfred Weidinger, Yoko Ono, YOKO ONO UNIVERSE
.
.
.
.
.
.
.
source:echomorgancom
Xie Rong (also known as Echo Morgan) appropriates stereotypes of ‘Chineseness’, and tropes of Chinoiserie and femininity in order to subvert them. Utilising her own body as material, she often works with text written on her skin using red lipstick, black Chinese ink, white ‘ink’ made from jasmine tea, or her own breast milk after giving birth to her second child. She mines her own experiences of childhood, family, marriage and motherhood – and those of her female ancestors – juxtaposing English narration with Chinese traditional folk song to play with her complex hybrid identity. Her work explores the territory of translation: between two languages, between gesture and stillness, between her Chinese past and English present, between performance and image. Xie Rong studied at the Sichuan Fine Arts Institute High School before moving to London, where she gained a BA in Graphic Design at Central Saint Martins and an MA in Fine Art at the Royal College of Art. Her work has been seen in the United States, United Kingdom, France, China, Sweden, Egypt, Germany, Australia and Korea.