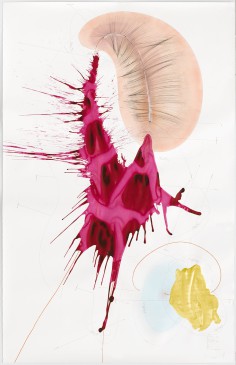 source:artnetcom
Jorinde Voigt is a contemporary German artist. Known for her coded drawing installations which resemble algorithms or sound waves, Voigt’s background in music and philosophical studies established her ongoing interest in probing scientific mapping processes. Throughout an inventive and playful drawing practice, her work visualizes thoughts and infinite spaces while examining the way in which information is represented visually. Born on January 19, 1977 in Frankfurt, Germany, she went on to study philosophy and modern German literature at the University of Göttingen and then visual art at the Royal Academy of Art in London. Voigt’s work can be found in the collections of the Centre Pompidou in Paris, The Museum of Modern Art in New York, and the Art Institute of Chicago, among others. She lives and works in Berlin, Germany.
.
.
.
.
.
.
.
source:martagnypcom
How can you bring order to the complex reality of today’s everyday existence? How can you find your own way between the quick impulses, rhythms and acoustics, ever-changing images and illegible codes that constantly penetrate our lives?
The drawings of Berlin artist Jorinde Voigt reveal an effort to understand the world with her own fascinating logic. In her imaginary landscapes – no matter how dynamic and complicated they might seem – lines, numbers, movements, arrangements and color schemes show a striving for order. Voigt’s desire to schematize and understand reality results in impressive algorithmic images in which non-existing places and fictitious situations are engaged in narratives that are accessible and hermetic at the same time.

Voigt often constructs her own rules and sign systems, for example the recent series that was based on the book A Lover’s Discourse: Fragments by Ronald Barthes. Using simple, easily recognizable shapes of objects discussed in the book, Voigt creates her own alphabet founded on her first associations with the given item, be it an old-fashioned telephone horn, a running black horse or a red heart. What these objects signify in her world, and how their mutual relationships are constructed, remain mysterious to the viewer – thereby triggering his imaginations even more. What is striking here that Voigt uses the very classical medium – a pencil drawing on paper – but manages to create a feeling of monumentality, which is in sheer contrast with the usual intimacy of this medium.

Voigt is known for the enormous formats of many of her works, as well as the explosive swinging lines and seemingly moving constructions that make her drawings look dynamic. The rationality of her mathematical precision goes hand in hand with the ephemeral, lace-like delicacy of her drawings. Her obsessive measuring and counting implies an urgency to make sense of the reality that surrounds us. They suggest a possibility of meaning, which the viewer is invited to find in the footsteps of the artist.

Voigt is best known for her graceful spiralling arcs and parallel looped lines, stretched and interwoven, bursting across the page as if caught up in a strange temporal chain reaction. Her meticulous drawings are schematic yet of the natural world, reminiscent of ocean current charts and water droplets falling in slow motion into a pool. They are part timeline, part electronic wiring diagram, part exotic system of musical notation which chronicles subjective experience. Her work seems to be both familiar and totally new, controlled yet wild and unhinged.