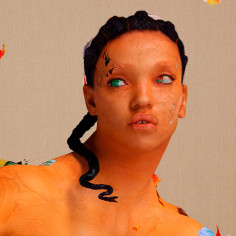 source:nytimescom
‘Mary Magdalene’: How FKA twigs Made Her ‘Most Complex Song Ever’
It took months for the singer, songwriter and dancer FKA twigs to perfect the title track for her critically acclaimed new album. See how she got it right in the latest episode of Diary of a Song.

The singer, songwriter and producer FKA twigs, born Tahliah Debrett Barnett, is a polymath who keeps adding to her arsenal.

At 31, she has complicated her reputation as a whispery singer of sparse, deconstructed R&B songs by blowing out not only her sound but her broader creative practice: She has trained as a dancer in various underground styles (vogueing, krumping, pole work), while also working as an actor, director and even a student of wushu, a form of Chinese martial arts that can resemble sword fighting. Crucially, FKA twigs, known to collaborators for her dedication to practice and discipline, then brings all she’s learned back to her music and live performances.

The result, most recently, is “Magdalene,” her second full-length album, which was released last month and became one of the most critically acclaimed releases of the year. “In the voluptuously disorienting music she has been releasing since 2012, love has been pleasure and pain, sacrifice and self-realization, strife and comfort, public performance and private revelation,” wrote Jon Pareles in The New York Times. “Sounds materialize to destabilize the pulse, upend the harmony or just add disruptive noise; gaping silences open up, suddenly isolating her voice in midair.”

The album was named for the biblical figure Mary Magdalene, in whom FKA twigs found inspiration after undergoing surgery to remove six fibroid tumors from her uterus in late 2017. In the latest Diary of a Song episode, the singer and her fellow producers break down the intricate processes that led to writing and recording “Mary Magdalene,” the title track and centerpiece of the album. The song came together over many months in three phases, from initial bedroom sessions with the pop producers Benny Blanco and Cashmere Cat, to work in a haunted house with the British electronic producer Koreless, and finally, at the storied Electric Lady Studios in New York with the experimental composer Nicolas Jaar (and possibly with Prince’s purple spirit).

FKA twigs, who is credited along with Noah Goldstein as the executive producer of the “Magdalene” album, called the title track “the most complex song I’ve ever made.” Watch the video above to see how she did it.

“Diary of a Song” provides an up-close, behind-the-scenes look at how pop music is made today, using archival material — voice memos, demo versions, text messages, emails, interviews and more — to tell the story behind the track. Subscribe to our YouTube channel.
.
.
.
.
.
.
.
source:pitchforkcom
rom her first video, 2012’s mesmerizing “Hide,” the singular focus of her vision was apparent, a holistic project that rendered FKA twigs’ operatic approach to club beats inextricable from her astounding art direction. In the seven years since, she has made her art into a kind of theatrical multimedia experience, crafting elaborate shows and videos that intertwine and smudge the lines of classicism and the avant-garde. She is astonishing, ambitious, and seemingly good at everything, singing over her own ticker-tape beats, self-directing wildly conceptual videos, and ravenously hoovering up dance disciplines (apparently up to and including Chinese sword fighting) until she masters them.

Yet in spite of twigs’ distinctive soprano (spectral and often papery) and her experimental production (stunning and often bellicose), her music has resonated best as a part of a whole, a piece that propels her full-blown artistry but does not totally comprise it. Chalk this up to twigs’ innovation in the Eyeballs Epoch, but even 2015’s incredible M3LL155X EP—a brooding and serrated read on genres like industrial, ballroom house, and triple-time rap—centered adventurousness over melody. It let the fullness of her art bring the beats along with it—weird bangers meant to challenge patrons of the most interesting nightclubs—but was probably best experienced while watching French artist and polymath Michèle Lamy rendered as a deep-sea anglerfish. The gesamtkunstwerk of twigs sometimes overshadowed the music itself, in part because so much of twigs’ presence is her world-class athleticism as a dancer. She imbues voguing and lyrical ballet with such grace and sensuality that the emotion of her music emanates directly from her body.

MAGDALENE, then, is a fucking revelation. FKA twigs’ first album in four years, and her best work by far, is as introspective as anything she’s written, but more obviously centers her voice as a conduit for plain emotion. Written during a publicly scrutinized relationship with a famously reluctant vampire, as well as a more private recovery from the removal of fibroids from her uterus, she has said she found solace and inspiration in the story of Mary Magdalene, among the New Testament’s most reviled and misunderstood character, whose complexities were rewritten by centuries of chauvinist churchmen into a fallen-woman side note in Jesus’ story. By locating herself in Magdalene’s lineage, twigs, a Catholic school alumnus, explores the ways deeply conservative expectations trammel women; in doing so, she locates a version of herself within these ancient and oppressive archetypes, upending and transcending them through the power of her songwriting and the sheer magnetic pull of her presence.

“thousand eyes” opens MAGDALENE with twigs singing in the austere polyphony of Medieval church music, a meditation on the moment before a permanent departure (“If I walk out the door it starts our last goodbye”) that, with repetition, reveals itself as a hymn. It’s a prologue for an album whose songs are produced like narratives, with a beginning, climax, and denouement. She grapples with survival—psychic and physical survival—the way a woman who lives to move might respond to being laid out by tumors on an organ that facilitates birth. She is furious in parts, attacking tracks like the sweet “home with you” and snarling standout “fallen alien” with virility and self-preservation. Even if shit went south, she refuses to saddle herself with the burden: “I’m a fallen alien, I never thought that you would be the one to tie me down,” she seethes. “But you did in this age of Satan/I’m searching for a light to take me home and guide me out.”

MAGDALENE is visceral and direct, but despite featuring a trunk-thumping Future collaboration (“holy terrain”), this is not a play to make pop music in the charts-humping sense. It’s a document of twigs’ marked achievements in songwriting and musicality as she elucidates her melodies without sacrificing her viewpoint. “sad day,” one of MAGDALENE’s most astonishing tracks, finds twigs properly genuflecting at the altar of Kate Bush, clearly having learned from her ability to translate inner sanctum into cinematic, Shelleyan alt-pop. The production by twigs, Nicolas Jaar, Skrillex, and benny blanco is utterly sublime: Skittering toms build onto an oscillating space-synth, the beats a proscenium for twigs’ voice and, especially, her lover’s desperation. Even if “sad day” doesn’t tell an explicit narrative in its lyrics, its production and twigs’ delivery tell an emotional one, that of the last desperate grasps at love in a power imbalance; we’re at the center where the story turns, teetering towards its inevitable end.

That the album stands alone is not to say the totality of her vision is truncated; twigs has already released three videos to accompany its nine songs. The first, “cellophane,” set the tone for the project, showcasing her pole-dancing skills to a dissonantly sorrowful ballad. (That she apparently finds it funny is a testament to her character—serious artists who can’t laugh at themselves are the worst.) The armchair interpretation of “cellophane” is as a meditation on the virulent racism that disgusting British tabloids and the worst of Twilight stans lobbed at twigs during her relationship with Robert Pattinson, but it’s equally a mournful reflection on the insecurities that dog any inequitable relationship. The imagery twigs has associated with “cellophane”—pole dancing, a feat of physical strength set perpendicular to the emotional strength she sings about lacking—calls up the idea of performing for others’ pleasure. It’s a sad solo dance by someone both fully present in herself and aware that she’s toeing the line between agency and subjugation. As the final track on this deeply thought, deeply felt album, “cellophane” acts as a rejoinder to “thousand eyes”—how sickening it must be, a woman artist constantly watched by bigoted tabloids interested in tearing you down from the man you love, how they did Mary M. and Jesus—and underscores the sorrow woven through MAGDALENE. The fact that sorrow spurred a musical growth this formidable, though, is evidence enough that twigs will always find her way back home.
.
.
.
.
.
.
.
source:muzokoru
Мария Магдалина — пятый трек с одноименного альбома FKA Twigs. Как не трудно догадаться, песня Mary Magdalene полностью посвящена библейскому персонажу Марии Магдалине, чье имя, помимо прочего, послужило названием для всего альбома певицы.

E, no entanto, sem simplificar, com aquela sensibilidade que, no universo da música pop, a faz contestar os papéis tradicionais atribuídos à mulher com uma elegância e contenção que falta a muitas outras, FKA twigs permite mais ou menos conscientemente que, por inúmeros poros, irrompam os limites, os contrastes e as aporias deste ponto de partida. Como em Citizen Kane, de Orson Welles, também aqui o poder convive e parece findar inevitavelmente na solidão. “Lonely is my hoping”, rumina Tahliah durante o seu “daybed” de depressão, inércia e pírrico prazer. Em última instância, é impossível escamotear a perda e a falta: “And for the lovers who found a mirrored heart/ They just remind me I’m without you”. E não estará a insegurança na origem da tentativa de se afirmar, não terá o poder a sua raiz no temor? “Will you still be there for me, once I’m yours to obtain?/ Once my fruits are for taking and you flow through my veins?/ Do you still think I’m beautiful, when my tears fall like rain?/ My love is so bountiful for a man who is true to me”. Ou no ressentimento, acontecido o que se temia? “Did you want me all?/ No, not for life/ Did you truly see me?/ No, not this time/ Were you ever sure?/ No, no, no, not with me”. E assim assoma, neste álbum sobre o empoderamento, toda a dúvida e incerteza sobre o outro, sempre livre de se ir embora, impossível de conquistar, terminando numa súplica com que se confessa a própria dependência: “When you’re gone, I have no one to tell/ And I just want to feel you’re there”.