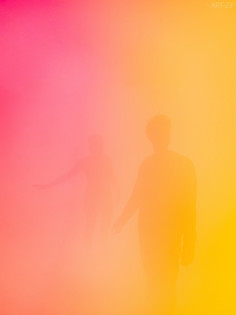 source:anothermagcom
Who? Brussels-based artist Ann Veronica Janssens’ practice is concerned primarily with light, colour, and perception. Janssens makes very few art objects. Instead, her work attempts to escape the ‘tyranny of objects’ and what she describes as their ‘overbearing materiality’. Since the late 1990s, Janssens has filled spaces with washes of coloured light or ‘mist sculptures’: dense, illuminated clouds of vapour that render surroundings unfamiliar and sensory perception altered. Janssens’ immersive environments aim to place the visitor at one remove from daily life, in order to better explore the sensory experience of reality. If all this reminds you of Antony Gormley’s famous Blind Light (2007) which enveloped visitors to London’s Hayward Gallery in a thick, white cloud, you should know that Janssens was doing it first.

What? The British-Belgian artist has installed her signature environments across the globe. Janssens was included in the Hayward Gallery’s critically acclaimed Light Show in 2013, while another recent project saw Janssens install huge blocks of coloured glass over the windows of the Chapelle Saint-Vincent in Grignan, France. Her simple, sparse sculptures draw on the visual language of science as much as that of Minimalism. Like the environments, they draw attention to the embodied act of seeing.

London’s Wellcome Collection chose to launch its year-long series States of Mind: Tracing the Edges of Consciousness with Janssens’ ‘mist sculpture’ yellowbluepink (2015)– and with good reason. Janssens’ practice continually explores our consciousness of perception. The single-work exhibition highlighted the beauty of subtle gradations of colour and light alongside the subjective limitations of sight. Visiting the bright, blissful exhibition was intentionally disorientating: the eye lost clarity, while all sound was subdued. Hearing became heightened to counter the obscurity of the haze.

Janssens’ mists are so dense that the disruption to ordinary vision is experienced almost like a temporary blindness. The eye strains to pick out something tangible, anything, and is met only by disorientingly beautiful light and colour, alongside a pervasive sense of unreality. The opaque vapour is dry and odourless, and all the more disorienting for its lack of familiarity – it is experientially unlike even the steamiest sauna or thickest fog. The titular sweet palette of tender yellow, blue, and pink hues added to the pleasure of the experience. Works such as yellowbluepink have seen Janssens compared to American light and space artist James Turrell and Danish-Icelandic heavyweight Olafur Eliasson, who used a similar strategy to Janssens when he filled Tate Modern’s Turbine Hall with mist and filtered light in The Weather Project (2003).

Why: Janssens’ work is irresistibly Instagram-able; photos taken at the Wellcome Collection’s yellowbluepink exhibition showing visitors silhouetted through soft washes of colour were been shared relentlessly on social media. What’s more, now that a new eponymous exhibition at New York’s Bortolami gallery is showcasing a selection of her most recent light and texture based experiments – from a heap of blue glitter upon the floor, to interactive light installations – not to mention her first US solo exhibition at the Nasher Sculpture Center in Dallas, Texas – the images are only going to get more frequent.

However, this ubiquitousness in no way undermines Janssens’ practice. Rather, it points to its aesthetic wonder — and, crucially, to the power of experiencing of her work in the flesh. Janssens’ art requires time and physical immersion. Given this, its effect is in turns exhilarating, unsettling, and soothing. In Janssens’ own words: “Nothing is more beautiful than a person’s own perception.”
.
.
.
.
.
.
.
source:newscientistcom
Three bands of light – one pink, one yellow, one blue – illumine the obliterating smog that artist Ann Veronica Janssens has used to fill the Wellcome Collection’s first-floor gallery. This white-floored, white-walled, white-ceilinged room is trying very hard to disappear.

There’s no directionality to the light here, so there is no sense of up or down. Your first sensation is not so much of falling as of leaning, or rather, of being leant, like a roll of carpet propped against a wall. This sensation, that you are suddenly operating out of kilter with the real geometry of the world, does not go away.

I’m not alone in here. The other explorers are just about visible as they come within braking distance of me. The walls are another matter. The light reflected off the smog and the light reflected off the walls are indistinguishable. The walls may as well be made of glass for all that you can see them. Hitting one, I turn and move forward, running a finger along the hard surface to keep my orientation – and promptly bump my nose on another wall.

All the time I’ve been thinking I’m staring into the void, I’ve actually been staring into a corner. I turn around to face into the room. At least, I think I do.

Into the mist
The room is a rainbow of mist. You step through an airlock arrangement into pink mist. If you walk straight ahead you will shortly pass through a yellow murk and into a blue cloud.

Those loose synonyms – mist, murk and cloud – aren’t just there to get what might have been a repetitive sentence past the subeditor. They have significance.

The pink zone is a true smog, the one that most obviously messes with your perceptions. It feels profoundly, viscerally wrong – faux psychoanalytical explanations of being trapped in a womb seem irresistible.

The pink zone robs me of things to see, and also of the actual sensation of seeing. I am made painfully aware of the floaters scudding over my eyeball. It’s probably best to avoid this show when you’re recovering from the night before.

The yellow middle zone is a queasy, transitional space, that seems to shift depending on whether I approach it from the blue end of the room or the pink end. I find it hard to stop here.

In the blue zone, in contrast to the pink zone, it is virtually impossible for me to imagine that I cannot see. There’s still nothing around me, but the nothing feels familiar and natural. I’m walking on air. What could possibly go wrong? As I think this, I stub my toe: another wall.