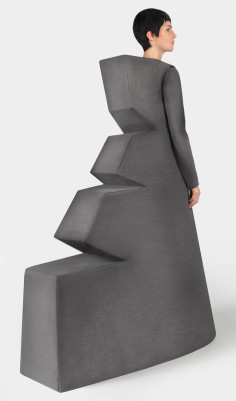 source:irenebrinationcom
Yuri Pardi’s “Monument” collection, showcased at the graduate shows during summer, was definitely among the most original ones. A take on geometry and anatomy, the collection featured men and women’s wear garments that looked as if they had been sculpted from grey concrete blocks. The pieces were instead made with grey wool and Pardi played with patterns, creating protrusions and rigid volumes supported by foam sheets that dramatically altered the shapes and silhouettes of the designs. This process allowed Brazilian-born Pardi to reduce the body to geometrical shapes in an exercise that called to mind the art of the Proto-Cubists or the Italian futurists, and that indirectly referenced the monumental modernism of Oscar Niemeyer or the concrete brutalism of Italian-born Brazilian architect Lina Bo Bardi.

Geometry, usually considered as a field of absolute clarity and the locus of rationality, turned therefore for Pardi into a way to create an irregular rationality that added surprise and emotion to a design. Ziggurat-like squarish blocks traced the back of a dress characterised by two minimalist seams running from the front to the back, a trick obtained by cleverly altering the pattern cutting; rectangle-shaped elements around the shoulders and the hips but invisible from the front disrupted instead the straight silhouette of a long gown. Menswear was altered via the same rectangular protrusions but featured highlights in darker shades of grey.

Pardi chose this nuance inspired by German artist Gerhard Richter’s statement about grey being a neutral and inconspicuous shade, proving that this colour can instead force our eyes – stressed by the constant visual overload we are subjected to on a daily basis – to refocus on details, on the power of light and shadows and on a minimalist aesthetic of reduction.

Do you consider yourself an artist or a fashion designer and which disciplines inform your work?
Yuri Pardi: I believe every designer has to be an artist, but not every artist is a designer. I consider myself a designer in the wider sense of the word. The project methods and thinking in design can indeed be applied to any area, from graphics to fashion. Fashion is just the way of designing I prefer. However, designing for me is more than just about my personal expressive needs, since I strive for something that could convey a message pertinent to the present scenario. This leads me to naturally draw from art, architecture, design, philosophy, sociology and express it through clothing.

Your graduate collection has got something architectural about it, can you tell us more about the background inspirations?
Yuri Pardi: My latest collection is entitled “Monument” and explores the relationship between people as individuals and aspects that are collective and common to all humans. I have translated this idea into garments that morph from traditional tailoring techniques into perfect geometric shapes. The former represent the body, the individual; the latter hint instead at the universal, the equal. You can find further information about my collection in this feature and interview.

Did you get inspired by any specific buildings for the shapes and silhouettes included in the collection?
Yuri Pardi: No, the inspiration for the shapes came exclusively from the human body. Every shape reflects a segment of the body projecting outwards and forming a polyhedron.

What fascinates you about architecture and who are your favourite architects?
Yuri Pardi: The notion of space and being able to expand or contract space, reveal or hide it, according to the proportion and lighting. The simple physical existence of three-dimensional objects is really fascinating. There is something really primal and beautiful about perceiving an object in space. My favourite architects are John Pawson, Tadao Ando and Oscar Niemeyer.

Grey is the prevailing shade in your collection and it almost evokes concrete, does this material inspire you?
Yuri Pardi: Grey is the only colour in this collection, in two shades. It was chosen for a number of reasons, resembling concrete is one of them. The main reason for the choice was to give absolute focus to the shape as opposed to surface graphics or embellishments. The choice is perfectly explained with this statement by Gerhard Richter: “Grey. It makes no statement whatever; it evokes neither feelings nor associations: it is really neither visible nor invisible. Its inconspicuousness gives it the capacity to mediate, to make visible, in a positively illusionistic way, like a photograph. It has the capacity that no other colour has, to make ‘nothing’ visible.”

Your pieces must also be very interesting pattern cutting-wise, can you tell us more about developing the patterns, was it challenging?
Yuri Pardi: Yes, it was very challenging. The patterns turned out to be very mathematical due to the precision needed to keep the shapes in place whilst still allowing freedom of movement to the wearer. I developed a combination of traditional tailoring with flat polyhedra keeping darts and seams to a minimum. The big dress for example is made entirely with only two seams.

What kind of fabrics did you employ for this collection?
Yuri Pardi: All the collection is made of only one fabric – synthetic wool – plus the interlining in polyester fusing. The only slightly different material used was foam sheets for the internal structure.

What plans do you have for the future?
Yuri Pardi: I am currently working as a fashion assistant and planning on creative opportunities. I have no plans of taking part in any fashion events for the time being.
.
.
.
.
.
.
.
source:dezeencom
Graduate shows 2015: garments appear to be carved from stone in University of East London graduate Yuri Pardi’s Minimalism-influenced fashion collection.

His grey wool garments are intended to extend parts of the body to create minimal, angular forms. The rigid volumes that protrude from the back of each outfit are created by foam sheets tucked into pockets underneath the clothing.

“I designed garments that morph from the shapes of the body into ‘pure’ geometrical shapes,” Pardi told Dezeen.

“I wanted to create a collection that could show that reduction and Minimalism are far from boring, and can be just as powerful as other visualities without being as loud,” he said.

The most dramatic example is a basic dress extended backward with bulky squarish blocks, which are reminiscent of the armoured fins of a Stegosaurus.

Worn over a long-sleeved top, the floor-length dress only has two seams that run from front to back down the edges of the blocks.

“The challenge was to identify, on the flat pattern cutting, the moment when the traditional lines of tailoring proceed into the shapes of a flattened polyhedron and still keep the seams to a minimum,” said Pardi.

In another outfit, two rectangular protrusions – one from the shoulders and one from the hips – are worn over a dark dress with a straight silhouette.

A similar outfit pairs a light-toned jacket and skirt, both with additions incorporated into the back that are not visible from the front.

Menswear in the collection includes a top with a straight vertical fastening offset on the front, which has an element with a triangular profile protruding from its upper back.

The garment also has sleeves that angle out at the elbow, highlighted with a darker shade.

The top is paired with trousers where the lighter material frames a rectangle of dark fabric on the inner legs and around the crotch.

This motif is replicated on a men’s jumpsuit that also features the same angular sleeves.

Another wide-necked top has two volumes extended out from its back, separated by a triangular slice.

Two rectangular flaps of dark fabric cover the front and back of the pair of trousers worn in combination.

Influenced by the words of German artist Gerhard Richter, who said that grey “makes no statement whatever”, Pardi produced the entire collection using two shades of the same grey wool.

“Making the whole collection in grey forces the eye to notice and find interest in the slight variations in light and shade that come with the shapes,” said Pardi.

To create the garments, the Brazilian-born designer researched Minimalism across architecture, art and fashion, as well as Communist and religious uniforms, to trace common themes and reasons for the style.