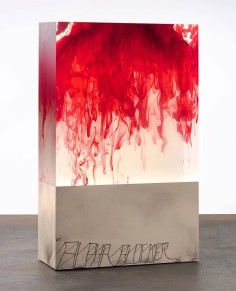 source:gagosiancom
In 2006 the artist Sterling Ruby began a series of sculptures with the common title ACTS, an acronym for “Absolute Contempt for Total Serenity”—a studiedly violent title for calmly violent sculptures. All of the works in the ACTS series employ the same seemingly simple formal juxtaposition: wide urethane blocks are placed atop broad laminate-clad pedestals, in a play of equilibrium and statics between the two parts that varies according to the case, suggesting here more, there less dramatically the possibility of a ruinous spill.

If the laminate pedestals reveal scattered signs of vandalism (such as scratches, scuff marks, inscriptions, and traces of spray paint), the urethane blocks appear almost lyrically pictorial, innervated as they are with color dyes that seem to have been dripped into the synthetic material and captured permanently mid-descent. If from a visual and tactile point of view the laminate seems like a “deaf” material, almost catatonic in its common, domestic, and entirely unprecious use, the transparency and chromatic exuberance that instead distinguish the urethane blocks and pigments create a sharp break between the two parts of each sculpture, and the imbalance that distinguishes the series ultimately creates a form of psychological tension, almost a state of alert.

Since the very beginning of his prolific career, Ruby has organized his production in bodies of work that he reiterates over time, often returning to a particular typology across several years. But if his various series and media—which range from ceramics to painting by way of sculpture, video, collage, and, more recently, fashion—can at times appear disparate, an intimate coherence dominating Ruby’s practice as a whole is gradually becoming apparent.

To appreciate the scale of the theoretical and formal edifice that the artist has been building for the last fifteen years or so, we can attribute the genesis of the ACTS series to the video work Dihedral, created in 2006, and thus in the early years of Ruby’s career. Dihedral consists of a fixed shot of what is presumably an aquarium, though the tight framing excludes any visual reference that might help us to understand the true nature of the container of liquid that constitutes the space of the action. What we see, more precisely, is a progressive choreography of colored liquids that are successively poured in to dissolve and mix among themselves, creating an unstable, fluctuating chromatic landscape that continually coalesces and disperses before our eyes. Dihedral seems to illustrate the process that we see already completed in the urethane blocks of ACTS: the pigments that in Dihedral we see in constant motion and becoming are in ACTS fixed and suspended, almost imprisoned. What once was fluid is now solidly inert.

Things get murkier when we lend our attention to the video’s soundtrack, which consists of a voice-over that, rather impenetrably and in a monotone, ruminates on matters relating to space and form. The text from which these statements are extracted is an article that Roger Caillois published in the 1930s, in the Surrealist magazine Minotaure, titled “Mimétisme et la psychasthénie légendaire” (Mimicry and legendary psychasthenia), a disquisition on mimicry among insects that argues in favor of a system of knowledge in which rationality and the centrality of the subject are reduced to a possibility equivalent to others, a point like another within an undifferentiated space dominated by dislocation. And so the movement of the colors takes on a different, deeper psychological valence and becomes the image of a force that, by its very nature, is not only mobile and multiform but also struggles to stay contained inside a rigid structure, be it spatial (like an aquarium) or cognitive or moral. We can thus understand how the sculptures in the ACTS series stage forms of juxtaposition and opposition: if the upper, urethane part represents the immobile and lifeless space that literally contains and delimits something that would otherwise fluctuate in a state of free transformation, the laminate pedestals equally suggest a state of frustration and anger, but of opposite sign. Indeed, the urethane blocks display what remains following an expansive movement that proceeded from the inside toward the outside, an attempt that was frustrated; the laminate pedestals, on the other hand, are the site of an external aggression that comes up against an impenetrable, closed-in-upon-itself monolith.

The principle of opposition (between an impulse and its containment, between what is individual and what is normative), and of the violence that can spring from this antinomy, is a structural element of Ruby’s entire artistic output, something that runs through it like a backbone and is discoverable in several of his bodies of work. WIDW (an abbreviation for “Window”), for example, is a series of large wall pieces begun in 2016 in which acrylic and oil paint blaze alongside collaged cardboard and fabric elements. A vast chromatic field—expressive and monumental, almost meditative in its quiet disorder of gestures and materials—is barred with an intruding geometric sign that warns of and establishes a distance: we can see, but only through interference, a negation. Another form of negation—albeit a more subliminal one, so thoroughly interiorized as to be inherent to the specificity of the medium itself—appears in Ruby’s extensive use, since the beginning of his career, of ceramics. Speaking of the medium, he evokes as much the idea of expression as those of inhibition and impediment: “Once fired, the clay becomes a kind of monument to its prior malleability or expression. As soon as it hits the kiln it takes on the status of what once was, and it becomes a truncated or frozen gesture.”1 This same discourse can be applied to the series Monument Stalagmite (2005–13)—whose appearance of upward thrust is the result of overturning a PVC-and-foam structure upon which a large quantity of urethane resin has been dropped from above (thus here too we find a material that once was viscous)—and to SP (2007–14), in which the instability of spray paint, as an ethereal material, immediately solidifies on the canvas.
.
.
.
.
.
.
.
source:galleriesnownet
I use many different media as a kind of schizophrenic labor strategy. It seems very easy now to say it, but it has taken me years to convey that this scattered routine belongs within a coherent trajectory. . . . There is a lineage that links everything that I do together.
—Sterling Ruby

Gagosian presents sculptures by Sterling Ruby at Britannia Street. This is his first solo exhibition with the gallery in London. On view are works from two series, ACTS (2008–18) and TABLES (2015–19).

In an oeuvre spanning sculpture, ceramics, painting, drawing, collage, video, and garments, Ruby continually returns to themes of societal and art historical friction, generating feelings of anxiety and agitation by contrasting clean lines and recognizable objects with coarse and uncanny forms. ACTS + TABLE lays out Ruby’s critique of the authoritarian, exclusionary ideological underpinnings of Minimalism. He begins with familiar shapes valued by the Minimalists—simple tables and rectilinear blocks—but subverts them by defacing their smooth surfaces and exposing their physical means of production.

In ACTS—short for “Absolute Contempt for Total Serenity”—Ruby captures liquid dye inside clear urethane and balances these pure prisms atop scuffed, inscribed, and spray-painted Formica bases. These works expand upon his earlier Formica sculptures such as Big Grid/DB Deth (2008), a scratched-up monolith that exudes a cold, prisonlike institutional menace. In ACTS, the juxtaposition of unfeeling laminate slabs against vibrantly pigmented urethane is a potent one; it transforms the urethane from a passive, glassy vitrine into an active agent of incarceration that suffocates the blossoming furls of dye.

The exhibition also includes TABLE (DOUBLE LAST SUPPER) (2019), the culminating work of Ruby’s TABLES, a series that explores the concept of personal and cultural archaeology. In 2015, Ruby moved into a gargantuan studio outside of downtown Los Angeles and salvaged the welding tables left there from the building’s erstwhile function as a manufacturing warehouse. By affixing jutting metal pipes, faucets, and frying pans to the tables and covering them with tumorous masses of solder, Ruby stratifies and memorializes every act of labor that once took place on their surfaces, whether by the hands of workers from the building’s previous life, or of the artist and his studio. The table—whose name and adornments reflect Ruby’s own rural upbringing in a faith-dominant area of Pennsylvania—becomes a hulking, organic archaeological remnant from some unnamed human history.