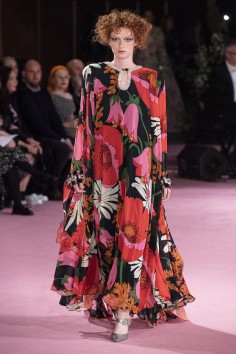 source:wallpapercom
Mood board: The energetic scrum that greeted guests at Matchesfashion’s celebration of Quinn’s collaboration with Moncler earlier this week, is a sign of the designer’s popularity and success in London. His couture shapes and whimsical floral prints provide a healthy dose of escapism from Britain’s perilous political climate, particularly notable when London Fashion Week has become a platform to boycott in aid of environmental protest. For S/S 2020 Quinn was fascinated by the idea of sanctuary, creating a dream world away from ‘the nightmare of reality’. Micro ruffled dresses with voluminous leg of mutton sleeves and silk bows, floral Chenogasms, rose print fishtail gowns layered with latex bodysuits were all part of his glamorous, bygone vision.

Scene setting: The designer lined the floor of York Hall Leisure Centre in East London with sugary pink carpet. His everyday-meets-romantic runway came alive to the live sounds of the Philharmonia Orchestra.

Best in show: If it wasn’t the gaggle of young girls dressed with duckling like-headdresses who paraded down the runway at what appeared to be its finale (at Roksanda cute kids also featured, namely the class of the designer’s daughter who sat in a line along the runway), it was the surprise bridal collection the designer debuted at the end of the show. A curtain dropped to reveal a baroque tableau, lined with gilded picture frames, and girls poised in bejewelled Twenties gowns, veils and ostrich feather headdresses.
.
.
.
.
.
.
.
source:londonfashionweekcouk
London born designer Richard Quinn established his eponymous label in 2016, upon graduating the Fashion MA at Central Saint Martins.