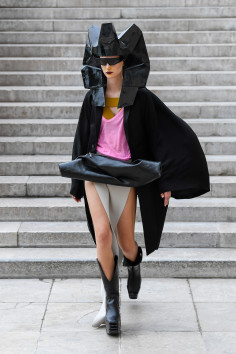 source: voguecom
Rick Owens has lately made headlines for his celebration of Larry LeGaspi, a designer whose name is little known but whose influence was vast, having helped the American rock band Kiss codify their signature costumes, face makeup, and menace. A major Kiss fan, Owens devoted his Fall men’s and women’s collections to LeGaspi and published a book on him with Rizzoli. He signed copies at a postshow party at his Palais Royal store. On the runway, though, he honored another influence on his life: his 87-year-old Mexican immigrant mother.

Owens was raised in the United States, lives in France, and manufactures his clothes in Italy. “That all wouldn’t work without open borders,” he said, alluding to the fight in the States over a border wall with its southern neighbor. But in place of the aggression that’s accompanied some of Owens collections in the past, the ambience he conjured at this show was sweet and affectionate. Men and women in black robes arrayed themselves around the perimeter of the Palais de Tokyo’s shallow pool and let loose a flotilla of bubbles “like something out of Disney’s Fantasia,” as Owens’s models did their perambulations.

As for those models? They looked like otherworldly goddesses in their towering platform boots and their Aztec-by-way-of-Fritz-Lang’s-Metropolis headgear. If you cared to, you could read in Owens’s fantastic vision a pointed criticism of President Trump, who’s called Mexicans “animals” and “criminals,” and worse. The Metropolis reference is no coincidence. Lang’s antiauthoritarian masterpiece depicts a grim underworld peopled by mistreated workers, i.e. the migrant farmers and other undocumented immigrants who do the hard labor that keeps America’s upper classes fed. But take the political gloss out of the story and this was still one of the most captivating collections of the week—if not the season. Who else has magicked a vocabulary, from the exaggerated shoulders of jackets to the tabard skirts to the strange protrusions jutting from pelvises, as sui generis as Owens has?

Marine Serre, Christelle Kocher, Kerby Jean-Raymond, and the Vaquera kids were in the crowd today. They caught a real beauty. Owens worked his glam sculptural silhouettes in hot pink, gold, ruby red, and an iridescent chain mail. The collection felt lit from within. And there were honest-to-goodness gowns—surely a first here—in cotton plissé with side panniers. In Disney fairy tales good conquers evil. Owens is too sophisticated a thinker to believe in absolutes, but, damn, he makes a fabulous princess dress.
.
.
.
.
.
.
.
source: wwdcom
Rick Owens’ Bauhaus Aztec priestesses were some kind of bad-asses. Gliding around the Palais de Tokyo fountain, they presided over a ceremony of wands and bubbles while sporting chrome headdresses glinting like car hood ornaments. It was a kick.

Owens was feeling nostalgic, as it turns out. Using blasts of Luis Barragán color, folkloric sequins and volumes with the grandiosity of couture, Owens mined his Mixtec heritage. (His mom, Connie, is Mexican, and his dad, John, worked in the public court system as a Spanish-English translator defending farm workers’ rights.)

He said backstage it was President Trump’s border wall and the potential of being cut off from family still living in Mexico that got him thinking about how the culture, high and low, shaped his aesthetic sense growing up in Southern California. The memories run deep, from the run-down movie theater he frequented in Porterville, Calif., that catered to migrant workers and screened films starring María Félix, to the East L.A. low riders obsessed with clothes and custom cars whom he met as a young adult living in Los Angeles.

“I do think East L.A. lowrider [guys] have been a big thing with me forever — those low-crotched baggy things, for example…I mean, I worked at Taco Bell and I used to get rides home from them. There was a crispness in the way they ironed everything and an economy of doing the best with what you’ve got, elevating a T-shirt with ironing.…I’ve always had that kind of pageantry with my clothes, the stiffness, volume and dragging,” he mused.

All of those elements were here, but with a fiesta’s worth of color and pattern, and a new level of cinematic glamour that was thrilling.

Consider the Aztec gold cotton duchess tunics, architectural marvels of pyramid points the ancients would have envied. Or the gilded sequin tunic dresses worn with the designer’s hyper-shoulder coats, or rebozo shawls for priestess presence. Owens even showed a few gowns that looked destined for a red carpet — micro-pleated infantas that were positively regal, and a black jersey column, geometrically cut and slashed to sexy perfection.

His L.A. relaxedness came out in the color-saturated T-shirts that topped side-slit skirts giving the collection a down-to-earthness; the bombers with lacing details snaking up the sleeves, and the peeled-off blazers with straps holding them to the hips.

Owens’ famed platform boots — Marc Jacobs took his runway bow in a pair this season! — morphed into cowboy boots with clear heels for Western cool, his new sunglasses were skinny and shield-like and his favorite leather bum bag stretched into something resembling an extra arm stretching across the hips — for when you need an extra hand? Whatever it was, viva la vida loca!

Below, you’ll find all the evidence you need to understand my thoughts on this spring/summer 2020 collection from Rick Owens. Aliens-meet-Egypt is honestly the most concise way to describe the looks, but you’ll have to see for yourselves all the intricate details the designer has put into this collection. Each look is truly a work of art and—dare I say—out of this world.