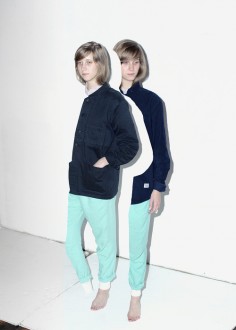 Adam Kremer’s photographs are not the product of a photographer rather they are the pictures of an artist who uses photographic techniques as a means to an end, to achieve the desired result. At the moment it’s a camera. There is a thin line between the two.

Kramer doesn’t seem to be that interested in the aesthetic tradition of photography so much as creating the right image. His pictures are exciting, even the most simple still life has an energy; the textures, form and playfulness palpable. This is an artist with a style that embraces the absurdity of life and has a humour that is utterly disarming.

Unlike many artists I have come across Kramer happily admits to his love of commissioned work with its enforced limitations, he sees it as an opportunity to find a way in, to describe his subject matter in a way that defines him, creates a relationship between him and the viewer. He’s only young and I can’t wait to see what he comes up with in the future.
.
.
.
.
.
.
.
source: pitchzine

It’s four in the morning, Valencia time, and Adam Kremer is eating liquorice in a dark hotel room. When fireworks go off outside the window it sounds like a war zone.

The Canadian-Australian, who relocated to New York City in 2010, is on location in Spain shooting the Las Fallas firework festival with fellow photographer Peter Funch, for whom he works as a photographer’s assistant.

Kremer started working at the studio of Asger Carlsen when he moved away from Brisbane in 2010, having contacted his favourite artists prior to departure in the hope of setting up some contacts.

“I just sent a bunch of emails to my favourite artists and headed to New York – within three days, I’d met most of them!” he says.

“I didn’t go to university, and I decided that I’d much rather learn in this way – from someone whose work I admire and respect. To try to get some insight into their process seemed like the most valuable thing I could do with my time.”

After three years of the visa troubles and going back and forth common to all Australian expats, he is happy to stay settled for the time being.

“I don’t know what I would be doing if I hadn’t relocated to New York and found this group of people. There’s something about these cities that are creative centres – this is where it happens,” he says.

“People move here for a reason – to be incredibly driven and completely focused on what they’re interested in. That’s a really fucking inspiring thing to be around. that feeling’s like a drug, and I find it difficult to be away from it, even for a week.”

“This is the nice thing about working in the creative sphere, that you don’t have to be tied to the one place. I’m always interested in seeing something outside of what I know, and while I love Australia, I know it too well.”

On the fraught topic of photography vs. art, Kremer defines a clear boundary.

“I would not say I’m a photographer. I never really think about the basic constructs of photography or what defines the idea of photography as a representation of a moment – it’s not something that interests me whatsoever.”

“It’s something that’s very important to me – to walk that tightrope line between the two. Still, I think I’d have trouble basing everything that I do purely on personal work, simply because I thrive on that communication and working within limitations.”

“For most people, their main focus is their personal work, but as far as commissions, its definitely most interesting to be doing something that’s treated like an artist’s commission – like, this album cover that I just shot, I love doing that kind of thing because its nice to be working with somebody who’s also a creative person coming at it from a different angle, and allows me control over the finished product. It’s very direct to work with someone like that.”

“I’m interested in things that are going against tradition, or touching on a play of reality and surrealism. I also really like any work that has some really nonsense humour. Asger and Peter are really my mentors and they’ve taught me everything I know. Their work is extremely serious, layered work, that still manages to ask questions and convey a serious humour.”

“Our generation is focused so much on aesthetics – really fusing design with fashion, art, music, it makes everything an aesthetic choice. But I think previous generations treated this sense of pluralism in a very different way and those things were being conveyed outside the frame.”

Unwilling to commit to one direction for the rest of his life, Kremer isn’t going to bind himself to one medium or path just yet – a concept that many precocious creatives could do well to observe.

“What use is it to limit yourself? Why would anyone possibly want to do that?”