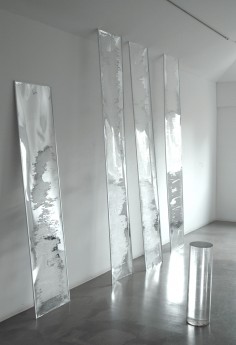 In Adam Thompson’s work, highly aesthetic objects are selected and re-presented, framed through a minimal artistic gesture that both fetishises decay as form and renews interest in the constraints of what can be found, what can be discovered “ready made”, as it were. The artist is figured in these gestural acts as an urban magpie, prominent in the otherwise austere works that offer no conceptual description nor framework through which to approach them; Thompson’s works are nearly all given the inflexible title Untitled, producing an ongoing series of significantly different but nominally identical objects. In this series each piece of work is individuated only by its material components – salvaged air filters, mylar, polystyrene foam – not by it’s title, foregrounding a materiality reliant on a play between presentation and representation. Purely formal concerns are amended by a thoroughgoing complicity with the limits of the conditions within which Thompson finds himself, salvaging, selecting and reclaiming only what is close at hand, what can be accessed in the locality. Thus, each work acts as a kind of portraiture of the location, slicing an abstract representation of the nearby, a metaphorical picture of the regional. And the local, at least through Thompson’s eyes, is a decrepit post-industrial landscape of discarded air filters, lost bits of timber, chunks of stone; unused or overused objects that seemingly have either total entropic decay or art as their final destination. Indeed, these objects seem to lure the artist to them, and he willing follows down an ongoing path through the object’s lifespan towards their eventual degradation.

In a recent abstract for a talk, Iranian philosopher Reza Negarestani quotes Colombian mathematician Fernando Zalamea who “identifies the process of decay as an expression of a profound continuity in nature through which ‘creativity expands without brake’”.(3) Lacking a brake, this form of creativity is based not “on obstruction (i.e. various modes of singularity such as the novel, the ideal and the sublime) but on acceleration”(4) For Zalamea, and by extension, Negarestani, these obstructions, halting processes in ongoing entropic degradation, are examples of a romanticism that they cannot abide. Instead, they propose decay be thought of as a building process of chemico-mathematical truth. Can we understand Thompson’s work as expressive of this very truth? That through a minimal frame it presents an accelerative conception of decay, that thinks the oncoming rush of death not as an end, but as the continuation of natural tendency. Precisely because of the reversal of the commodity form the work upholds non-productivity over use value, thus accelerating through commodification into a form of exchange value reliant on the complicity the work holds with the market. The reclamation of decay for the work then, puts it to work as exchangeable, precisely because it shears it from the local and projects it through the art market into a generic site, topologically defined by the empty frame rather than the complex “natural” world from which it has been extracted as raw material.

Adam Thompson prefers to distance himself from hands on making utilising found objects from a variety of locations and sources. Without a predetermined logic or conceptual code for their inclusion or exclusion, these materials are redistributed in the space with an economy of means, becoming objects without adding to the existing state of industrial overabundance and with large respect for their previous history. The tensions within the individual pieces are enhanced by the relationship between the works collectively and their questionable value as an exhibition.

Exhibiting decay, collapse and failure, the objects emerge from the moment environmental attrition takes hold and regress to their original nature. Yet themes of obsolescence, regression and exhaustion give way to the potential residing within the ephemeral understanding of matter. By re-instituting this material and cultural detritus, Thompson enacts an examination of creativity itself and of humankind’s relationship to nature through a physical experience which has been prioritised over language.

The contemplation of Adam Thompson’s works easily leads us to imagine the artist walking around wastelands, like a post-industrial flâneur randomly picking up some disused materials and objects, which obviously fascinate him. That would be a comfortable way to approach the mute and puzzling set of elements he displays as sculptures, installations or wall works. This romanticized, not to say legendary, approach of his work draws our attention to its very poetical aspect and rich power of imagination, and this counterbalances with the cold and generic universe reinforced by the unique title, Untitled, of each work. To distinguish the works from each other implies to refer to their exact composition and compel to describe them. Untitled (2012) is a Polystyrene foam board leaning on the wall. It echoes the form of a John McCracken’s rectangular sculpture which would have somehow completely lost any of its sophisticated features (perfect plane and polish surface and its sheer colour). Our look bumps into the irregularities of this synthetic surface, which reveals its own pictorially rich potential. Untitled (2012) is a stack of dented and mainly black aluminium water filters displayed on top of each other, in front of four filters “salvaged” from air conditioner units simply hung on the wall. Another work from 2012 consists of a pile of oxidized copper sheets. And Untitled (2011) also gathers material to create again a vertical sculpture, another cylindrical column — not black but transparent — in front of four rectangular Mylar boards leaning against the wall. Here the thin plastic films have been found as such, damaged by rain.

All Thompson’s works are directly taken from the archaeology of everyday life. Such as a collection of industrial residues and elements from the Junkspace of architecture and urban landscape, Thompson’s works connect with the sci-fi literary or cinematic universes among others inspired by J.G Ballard, William Gibson, Philip K. Dick, Ridley Scott or David Cronenberg. With them, the artist shares a common visual environment, a colour scheme — cold, dark, blue and black — and a clinical or aseptic display.

However, beside this possible fictional interpretation, the artist has been developing a proper system of quasi self-generated forms, an atavistic version or retro-vision of minimal abstract sculpture. In each series of works, the found object, as a random starting point, ends being inevitably replaced in the open-ended loop of the artist’s collection. The encounter with a single or a group of found objects generates the search for the next components belonging to the same typology or formal family. The reason why an object or a piece of material had been selected and what first triggered the curiosity and imagination of the artist always disappears remaining at the blurry border of a process that certainly distances any subjective decision from the final plastic composition. Untitled (2011) is a fragile vertical assemblage of sixteen damaged laptop screens. Their black liquid crystals offer automatic or random abstract patterns reminding a Rorschach test or some of the Hans Hartung monochromatic and translucent lithographies.

Thompson’s creation process and playful game consists of operating without any hand made interventions on the structure or surface of the object or with a grammar of minimum gestures restricted to juxtaposition or assemblage. His artistic strategy stages the belief, the eternal promise of the latent existence or perpetuation of those industrial and standardized elements, which used to stand as minimal sculpture. Relocating them in the field contemporary art, Thompson re-autonomises those functional but disused objects, however the damaged surfaces and traces of human use dissolve the anonymity and the generic aspect of those mass-produced forms. If those found objects have been removed from industrial series, they are no longer the reproduction of each of their fellow forms. The artist’s decision to choose the object in order to individualize and affirm the status of the artwork is no longer at stake. This choice has been substituted by the combination of both the worn traces and the consumption logic whose consequential obsolescence anticipated the artist’s decision to snatch the object from its functionality.

Thus, some of the essential features of the minimal sculpture aesthetics have been somehow cancelled or rendered invalid, leaving those forms as empty shells ready to be loaded again with other meanings and new stories. Such as a meta-discourse on the collection, those dead objects had been arrested in time before the artist collected them. On the contrary of the traditional logic of the collection, this is not the replacement of those objects in another field, for some exhibition purpose, which subtract them from their functionality. They were already considered as scraps and wastes, as material without qualities. Therefore, putting them back in circulation in a new field of exchanges and values, Thompson establishes a meta-collection negotiating a new space in-between death and life again.