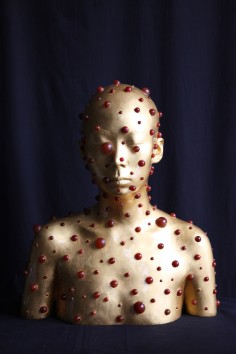 In Evolutionaura Chinese-Australian artist Ah Xian continues his exploration of the human figure. Like the artist himself, the figures occupy an in-between space – between countries and cultures. Xian sought political asylum in Australia in the post-Tiananmen period of the early 1990s, which provides, in Evolutionaura as elsewhere, an enduring conceptual basis informing his practice.
Comprised of eight life-size bronze busts, Ah Xian’s series references the traditional Chinese appreciation of the alchemic qualities of minerals, affixed to the casts in mimicry of a magnetic effect. The use of Lingbi stone hailing from Lingbi County in Anhui Province places the works within the traditions of Chinese philosophy and art, and is commonly referred to as ‘scholar’s stone’. Through the presentation of these minerals, Ah Xian artfully balances reverence with a critique of environmental exploitation.
.
.
.
.
.
.
.
source: acminetau

Ah Xian was born in Beijing in 1960. Initially trained as a painter, Ah Xian was a practising artist in China throughout the 1980s. Following the events in Tiananmen Square in 1989, he sought political asylum in Australia and moved to Sydney in 1990. Since the 1990s, Ah Xian has united traditional Chinese materials and techniques with a contemporary sculptural practice to address issues surrounding cultural displacement, identity politics and the relationship between East and West. His recent works continue to explore the material and symbolic possibilities of techniques such as lacquer-ware, bronze and cloisonné to represent the human form. In 1999 Ah Xian was included in the Third Asia-Pacific Triennial of Contemporary Art at the Queensland Art Gallery, Brisbane. Major solo exhibitions include China, China – Recent Porcelain Works of Ah Xian, Beijing Teachers University, Beijing, and Queensland Art Gallery, Brisbane, 2000; and Ah Xian Meets Jingdezhen, Museum of Frankfurt, Germany, 2002. Ah Xian lives in Sydney.
.
.
.
.
.
.
.
source: jornalggn