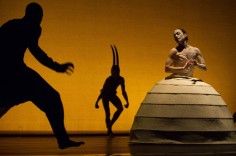 “in this work, i am interested in the dynamics of how stravinsky transformed the classical world of music by evoking emotions through patterns, rather than through expression, and these patterns were rooted in the concept of a woman dancing herself to death. this approach is a huge inspiration to me. but in a sense i hope to reinvestigate it, not just through patterns, as stravinsky did, but also through exploring the human condition. a rupture in the mind, a death in the body, and a birth in the soul, all remind us that the mind and imagination are wild and self-generating. in addition, to be creating this work with three different composers, nitin sawhney, jocelyn pook and ben frost, allows us to discover many different sound-worlds, using stravinsky as the key, the guide, the map.”
– akram khan

Founded in August 2000 by Choreographer Akram Khan and Producer Farooq Chaudhry, Akram Khan Company journeys across boundaries to create uncompromising artistic narratives. Having established itself as one of the foremost innovative dance companies in the world, the company is renowned for its intercultural, interdisciplinary collaborations and for challenging conventional ideas of traditional dance forms. The dance language in each production is rooted in Akram Khan’s classical Kathak and modern dance training, and continually evolves to communicate ideas that are intelligent, courageous and new.

Akram Khan takes human themes and works with others to take them to new and unexpected places – embracing and collaborating with other cultures and disciplines.

The dance language in each production is rooted in Akram Khan’s classical Kathak and modern dance training and his fascination with storytelling. The work continually evolves to communicate ideas that are intelligent, courageous and new, bringing with it international acclaim and recognition as well as artistic and commercial success.
.
.
.
.
.
.
.
.
source: vimeo

iTMOi (in the mind of igor) is Akram Khan’s latest full-length ensemble piece since Vertical Road (2010).
Celebrating Igor Stravinsky and the centenary of his legendary Rite of Spring, iTMOi explores the way in which Stravinsky transformed the classical music world by evoking emotions through patterns and their disruption, building an episodic drama around the ritual of sacrifice.
Khan says “I hope to reinvestigate this approach, not just through patterns, as Stravinsky did, but also through exploring the human condition. A rupture in the mind, fierce resistance to convention, a death in the body, and a birth in the soul, all remind us that the mind and imagination are wild and self- generating.”
Here he is fascinated by how human beings are capable of turning everything into a paradox — meaning turns into absurdity, justice into injustice, freedom into bondage.
“In addition, to be creating this work with three different composers allows us to discover many different sound worlds, using Stravinsky as the key, the guide, the map.”
With an original score by Nitin Sawhney, Jocelyn Pook and Ben Frost, and an international cast of 11 dancers, iTMOi is another extraordinary artistic collaboration from Khan and his talented team, creating a world where beauty and ugliness are ruptured to reveal how closely they interrelate with each other.
World Premiere: 14 May 2013, MC2: Grenoble, France / UK Premiere: 28 May 2013, Sadler’s Wells Theatre, London / Paris Premiere: 24 June 2013, Théâtre des Champs-Élysées
Artistic Director/Choreographer – Akram Khan
Composers – Nitin Sawhney, Jocelyn Pook and Ben Frost
Producer – Farooq Chaudhry
Material devised and performed by Kristina Alleyne, Sadé Alleyne, Ching-Ying Chien, Sung Hoon Kim, Denis ‘Kooné’ Kuhnert, Hannes Langolf, Yen-Ching Lin, TJ Lowe, Christine Joy Ritter, Catherine Schaub Abkarian and Nicola Monaco
Costume Designer – Kimie Nakano / Lighting Designer – Fabiana Piccioli / Scenographer – Matt Deely / Dramaturge – Ruth Little / Researcher – Joel Jenkins / Choreographic Assistants – Andrej Petrovic and Jose Agudo / Set Development and Construction – Sander Loonen and Firma Smits / Sound Designer – Nicolas Faure / Associate Producer – Bia Oliveira / Project Manager – Céline Gaubert / Tour Manager – Marek Pomocki
Akram Khan Company gratefully acknowledges the support of the Centre Dramatique National des Alpes in the making of costumes.
Produced during residency at Mc2: Grenoble
Sponsored by COLAS
Co-produced by Sadler’s Wells London, MC2: Grenoble, HELLERAU – European Center for the Arts Dresden, Les Théâtres de la Ville de Luxembourg
Supported by Arts Council England
Akram Khan is an Associate Artist of MC2: Grenoble and Sadler’s Wells, London in a special international co-operation.
.
.
.
.
.
.
.
.
source: independentcouk

Akram Khan’s new iTMOi (in the mind of Igor) starts with a roar, a bellowing shout that makes the audience jump. The confrontation goes with the theme. iTMOi marks the centenary of The Rite of Spring, the iconoclastic ballet with music by Igor Stravinsky and choreography by Vaslav Nijinsky, which sparked a riot at its first performance.

This year, Rite revivals and new productions are everywhere, but Khan avoids all but a glimpse of Stravinsky’s terrifying score. Instead, he and his team – which includes composers Nitin Sawhney, Jocelyn Pook and Ben Frost – focus on ideas of sacrifice, on what could prompt a ballet about a chosen woman dancing herself to death. Khan, who danced in Danny Boyle’s Olympic opening ceremony, does not appear in iTMOi. It’s an ensemble work, ambitious but uneven, with slow patches and some driving imagery.

The roaring comes from dancer TJ Lowe, who growls his way through the story of Abraham and Isaac. The exaggerated, shouty delivery smudges the words; it’s more effective when we hear a soundtrack of voices chanting in insistent rhythms. Bells chime, and smoke rises from the ground. Khan’s dancers, an international cast with varied training, stamp through fast, urgent steps, limbs pistoning with fierce speed.

Catherine Schaub Abkarian, in a big hoop skirt and pale makeup, looms over the other dancers. At one point she “chooses” Ching-Ying Chien, a small, delicate woman, throwing handfuls of white dust into her dark hair. Denis ‘Kooné’ Kuhnert puts on his own hoop skirt and rolls around the floor, bowling around as if unable to stay upright. Lowe moves with bold attack and silky flexibility, curving and slinking about the stage.

The solo figures look symbolic, but they can lack the impact of the compulsive group dances. One dancer prowls about in a loincloth and horned headdress. Perhaps he’s the ram sacrificed instead of the child in the Abraham and Isaac story, but only the dancer’s stern commitment keeps him from looking silly. iTMOi doesn’t have the tight pacing and focus of Khan’s own solo show DESH, which returns to Sadler’s Wells this summer. It’s a more meandering work.

The music, played live at these centenary performances, layers thoughtful string playing and patterned electronic crackles. Matt Deely’s set design is simple but atmospheric, a series of gauzes and drops with a plain frame for smoke and a metallic pendulum hanging overhead. Fabiana Piccioli’s lighting casts a rich glow over everything.

iTMOi’s London press night marks 100 years to the day since the first Rite performance. It’s not another riot, but remains atmospheric and strongly danced.