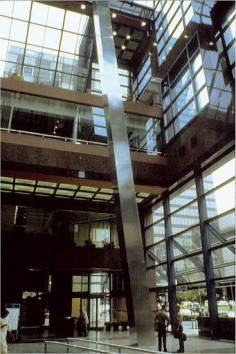 source: c4gallery
Located in Vancouver, Canada – HSBC Bank commissioned artist Alan Storey to create this uniquely inventive pendulum, mimicking one of the bank’s internal columns, and using a small surplus of the building’s air circulation system to power it’s movements. The video at right is shot from a miniature scale study model of the space. While this is not of the class of sculptures from the artist considered a ‘Drawing Machine’ – it is still one of his best known and most recognizable public artworks.
.
.
.
.
.
.
.
source: ecuadca

Alan Storey is a practicing artist working locally and internationally from Vancouver. He studied visual arts at Okanagan College and received a BFA major in sculpture from the University of Victoria. He has a 30 year history of site specific Public Art making and is best known for the ‘Pendulum’ installation in the HSBC Bank building on Georgia in Vancouver. Other projects are; ‘Urban Language’, in Montreal; ‘Slowswing with Panel Discussion’ in Olympia, Washington; ‘Public Service/Private Step’ outside Environment Canada at 401 Burrard, Vancouver; and the new VGH Energy Centre ‘Steam Work’.

Alan also has a company that provides design and fabrication services for Public and Private Art installation, including stainless, aluminum and bronze welding and specialized electrical and mechanical fabrication of all sorts, for art, architectural and marine applications.
.
.
.
.
.
.
.
source: c4gallery

Alan Storey was born in British Columbia, Canada in 1960. He received his BFA from the University of Victoria in 1982 and has since exhibited all over North America and Europe. Both in the public and contemporary art spheres, Storey has received numerous commissons for his sculptural works. As mediated by both the act of perception and the architecture of environment, Storey’s work deeply relates to human behavior and it’s interaction with the environment. In fact – he is best known for his remarkable public sculptures which interact with architecture and public space. One of the best known is the sculpture which dominates the lower levels of the HSBC bank in Vancouver – a gargantuan pendulum whose movement is activated by the movement of air through the buildings air circulation system. The more you explore his work – the more you realize precisely how integral this is to the understanding of his work.

For the last 20 years Storey has developed a series of ‘drawing machines;’ these are devices that record traces of human activity in a specific environment. In ‘Device for Drawing the Movements of a Ballerina,’ the drawing machine traces out the dancer’s movements across the stage over several evenings of performance. While transcribing the trajectory of the ballerina upon paper, the machine distills and extracts the physicality of the performance through its reduction to the simplicity of lines. Similarly Storey’s ‘Handle with Care’ records movements within a volatile enviroment. A shipping container with six hinged sides and a gessoed interior, ‘Handle with Care’ contains a moveable carriage holding a specially designed pen used by NASA for extraterrestiral excursions. Within the context of a moving vehicle, the box itself becomes a passive drawing machine. The vibrations, acceleration and braking of the storage vehicle (a transport truck) become the gestural source for the completed piece.

In his own words:

“Part of the philosophy in my approach is that a work of art in the public realm should intrigue and engage a passerby into an exploratory investigation of the content and its relationship to the surrounding site.”