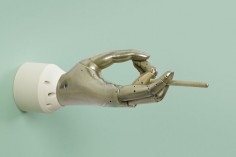 Through 3D modeling, Domanović has cast the ‘Belgrade Hand’ as an actor in her ongoing exploration of women’s liberation, art history and the history of former Yugoslavia and the Balkan region at large. The hand – the first of its kind and able to haptically respond to touch – is a representation of Yugoslavian innovation.

Focusing on the role of women and minorities as often overshadowed or misrepresented agents of technological innovation, Domanović’s sculptures, in their quotidian poses – a hand holding a cigarette, apple or baton – subtly engage a history in which these objects have a deep semiotic and historical significance. The cigarette, in this instance, is rather a ‘torch of freedom’, a term coined by psychoanalyst A.A. Brill in the early 20th Century and then used as a marketing scheme by pioneering ad-man Edward Bernays. Bernays hired women to smoke publicly as an assertion of their social equality, while at the same time conveniently awakening a massive and previously untapped market of smokers.
.
.
.
.
.
.
.
source: tanyaleighton

Aleksandra Domanović’s work is concerned with the circulation and reception of images and information, particularly as they shift meaning and change register, traversing different contexts and historical circumstances. Her works create strange taxonomies and manic associative chains that poke and prod at copyright laws, unpack the geopolitical implications of web domains, or explore, for instance, the model of exhibitions (the co-creation of the collaborative exhibition platform vvork.com).

Most recently, Domanović has turned her attention to the complex ways in which image culture and information flows have formed the postwar environment of former Yugoslavia. Whether investigating the phenomenon of what she dubs ‘Turbo Sculpture’ — monumental statues of American celebrities and movie characters like Bruce Lee, Johnny Depp, and Rocky Balboa, that have been erected across the former Yugoslavia — or constructing modest steles out of printer paper emblazoned with digital distortions of images from pre- and postwar life, or making semi-autobiographical forays into a rave scene that united the youth of the balkanized Yugoslavian territory, Domanović addresses the ways in which we attempt to heal the wounds of history through conviviality and denial.

Domanović has been awarded the 2014/15 ars viva prize. The ars viva exhibition series will present a selection of works by the three award-winners through 2015 at the Hamburger Kunsthalle, Galerie der Gegenwart; Bonner Kunstverein; and Grazer Kunstverein. Domanović’s recent solo exhibitions include: Glasgow International 2014, Gallery of Modern Art, Glasgow (2014); ‘Aleksandra Domanović’, firstsite, Colcheste (2014); ‘The Future Was at Her Fingertips’, Tanya Leighton, Berlin (2013); ‘Turbo Sculpture’, SPACE, London (2012); and ‘From yu to me’, Kunsthalle Basel (2012).
.
.
.
.
.
.
.
source: glasgowinternationalorg

Aleksandra Domanović looks at the history and development of technology through a gender-conscious lens. Her work specifically focuses on the point at which the machine meets, interfaces and touches the human user.

In her first institutional solo exhibition in Scotland, Domanović focuses on the marginalised representation of women in popular science fiction. Films such as Blade Runner (1982), Demon Seed (1977), Alien (1979), Prometheus (2012) and Gravity (2013) form the source material for prints of objects that interact or contribute to an important part of the female characters’ narrative. These films deviate from the conventional representation of women in cinema, where they are typically shown as mother, love interest or victim.