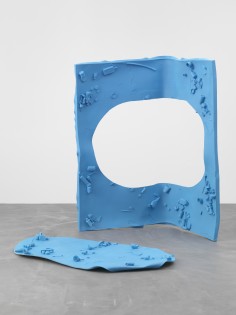 source: artobserved
Bent (Why Horses Paint), is a selection of new works by multimedia artist Alex Hubbard, and his first solo show with Galerie Eva Presenhuber in the gallery’s Löwenbräu complex exhibition space. Hubbard’s paintings move beyond the medium’s traditional two dimensional form, bending into shapes and structures which often seek complete autonomy from the wall.

These new paintings maintain a connection to previous works, such as Hubbard’s Trash Paintings, where the artist attached plastic objects cast in urethane to his canvases. The assemblages from both series become both commentary and choreography, their arrangements capturing the chaotic possibilities that exist for painting on canvas.

However, the works comprising Bent Paintings are based on a singular painting that was molded and cast nine times. The actual making of these paintings is hinted at in the show’s only video work, where Hubbard manipulates everyday objects before destroying them. The video’s performative nature, in relation to the exhibition’s paintings, bring to mind the legacy of Action painting, with its similar affinities to physicality and spontaneity.

Of course, some the improvisational elements present themselves by Hubbard’s use of volatile materials that require him to work fast and allow for unplanned results. The works on canvas achieve a painterly-ness that evolves directly from their process of creation. Through mounds of paint, Hubbard expounds on the visibility of the painting’s construction, and the painting’s own construction.

The multi-media and multi-dimensional nature of Hubbard’s work is a process of layers: layering a painter into video work, laying performance art into a painting and layering all elements into a sculptural form. A passage of avant-garde wordplay from the artist’s 2012 interview with Mousse Magazine conceptualizes this idea, and provides a small clue into the exhibition’s title, as well as to Hubbard’s use of polysemy within both his canvases and his speech:

“It’s great being able to layer one’s skin like that, to double it up, yield and harness its derivatives, and that painting is a medium that is sensitive, like a photographic plate, to skin’s becoming – onion only sweetens the deal – or at least keep my owners from putting ping-pong balls up my nose. While my marks are abstract, my artistry holds greater affinity with the creativity of something like a surveillance camera; a being affected by its ever possible documentation, a sort of techno-occasionalism. By prosthetic grace of this sensitized material surface, paint becomes me for the eternity that I will be glue.”

Alex Hubbard is originally from Toledo, Oregon and now lives and work in New York. His work was shown in the 2010 Whitney Biennial and he has had several solo shows in the United States. Bent Paintings closes on January 19th.
.
.
.
.
.
.
.
source: moussemagazineit
In his first solo show at Eva Presenhuber, Alex Hubbard presents his “Bent Paintings” and a video work. The sculptural character of the nine “Bent Paintings” breaks with conventions of classical painting, the geometrical two- dimensionality of traditional picture formats giving way to bent structures, some of them free-standing sculptures totally emancipated from the wall. As a continuation of his “Trash Paintings, ” to which plastic objects are attached in the style of a material assemblage, both the support and the applied plastic objects are subsequently cast in urethane. While this collage of different trashy objects resembles a staged presentation of the flotsam and jetsam of civilization, they also seem to be dancing, arranged in a secret choreography, the movement of its individual items frozen. All “Bent Paintings” are based on the same painting, which is nine times molded and cast.

The process of making the “Bent Paintings”, on the other hand, is characterized by a dynamism that recalls the table-top performances in Hubbard’s videos, where everyday objects are playfully staged and then gleefully demolished in unexpected ways in the spirit of an aesthetic of the performative – videos whose specific quality might be described as “moving painting”.

With reference to a quotation from Michael Snow, Hubbard adopts a cross-media strategy in his praxis, making films as a painter and paintings as a sculptor. Using similar strategies in his videos and his painting, he always explores the construction and reception of pictures in unexpected ways. Comparable with his videos in conceptual terms, Hubbard’s painting also calls for an improvisational approach. Working with such quick-drying, volatile materials as resin, latex, and fiberglass means working fast as well as being able to deal with the unforeseen. Besides the move into the third dimension, a top priority in Hubbard’s engagement with the painting format (in the classical sense of a two-dimensional pictorial space) is the principle of “anything goes, as long as it works” His pictures bring together all manner of things: objects attached to the surface, or large blobs of paint that cling on and hold things together. The construction of the pictorial space and the history of its making are always visible and understandable, reflecting Hubbard’s concept of constant motion and change.

Asked about his artistic practice in a recent interview with John Pestoni in Mousse (issue 35, October/November 2012, p. 172), Hubbard gave the following answer, which also explains the second half of the exhibition’s title (WHY HORSES PAINT):

Man: How would you like to introduce your practice?

Horse: I think in the infinitive, that is without introductions, or more specifically with its introduction self-evident to its production, its induction. Much like the word painting itself, an infinitive verb and a sedimented product, a being inhered by a potent excrescence of infinity, its beings. Blah blah blah, like I totally become a painter in surplus of my horse-being when my trainer puts a brush in my mouth. It’s great being able to layer one’s skin like that, to double it up, yield and harness its derivatives, and that painting is a medium that is sensitive, like a photographic plate, to skin’s becoming – onion only sweetens the deal – or at least keep my owners from putting ping-pong balls up my nose. While my marks are abstract, my artistry holds greater affinity with the creativity of something like a surveillance camera; a being affected by its ever- possible documentation, a sort of techno-occasionalism. By prosthetic grace of this sensitized material surface, paint becomes me for the eternity that I will be glue.
.
.
.
.
.
.
.
source: simonleegallery
Alex Hubbard is a New York based artist who works in painting and video. The use of the two media – in itself an unusual combination – is, for him, inextricably linked. Hubbard’s videos take the question of how the mark ing abstract painting might act as an index of a performative moment and turn it on its head, using the process and practice of painting as an allegory of the everyday. Where their relationship to painting is the most apparent, these films record the manipulation of objects on a flat plane, which, close cropped and shot from above, then becomes the vehicle for paint. At other times they are placed onto what appears to be a painted surface, into which they sink and disappear, revealing the ground as simply liquid paint. In other works again the frame is deeper and the assemblage more sculptural.
In counterpoint to the videos, Hubbard’s paintings often suggest a mechanical means of production. Fields of colour in fibreglass and resin are interrupted with richly pooled, dripped and poured paint. Their surfaces may be stencilled, trowelled or silkscreened – the anti-hierarchical choice of technique parallels the diy aesthetic of the video works. And through this deconstruction every traditional opposition of the formal language of painting is opened up: figure and ground, material and illusionistic depth, the horizontality of production and the verticality of display.