Nothing of This is Ours 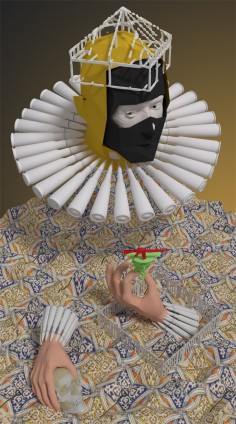 Nothing of This is Ours is a multiplayer playground made specifically for NP3’s experimental art space M0Bi.

From NP3’s press release:
“With his strong signature, and his recognizable visual and digital language, Alex creates infinite, surrealistic worlds with colorful creatures, alchemistic symbols, buddhas and other worldly cultural heritages. In the multiplayer game installation ‘Nothing of This is Ours’, visitors can immerse themselves in the mystic landscapes, graphic patterns and polygon characters. A journey without a destination, exploring with pure instinct. Alex offers the visitors a closer look at the artistic, innovative possibilities of the art game. The game as a contemporary medium, where the newest technique and art come together and enrich the one who takes the time to play the game. Alex invites the visitor to play in M0Bi, individually or collectively, experienced and inexperienced!”
.
.
.
.
.
.
.
source: alexmyersinfo

Alex Myers (°1980, Omaha, United States) creates media artworks and installations. By examining the ambiguity and origination via retakes and variations, Myers investigates the dynamics of landscape, including the manipulation of its effects and the limits of spectacle based on our assumptions of what landscape means to us. Rather than presenting a factual reality, an illusion is fabricated to conjure the realms of our imagination.

His media artworks question the conditions of appearance of an image in the context of contemporary visual culture in which images, representations and ideas normally function. By exploring the concept of landscape in a nostalgic way, he tries to increase the dynamic between audience and author by objectifying emotions and investigating the duality that develops through different interpretations.

His works establish a link between the landscape’s reality and that imagined by its conceiver. These works focus on concrete questions that determine our existence. By studying sign processes, signification and communication, he makes work that generates diverse meanings. Associations and meanings collide. Space becomes time and language becomes image.

His works never shows the complete structure. This results in the fact that the artist can easily imagine an own interpretation without being hindered by the historical reality.

Alex has exhibited at NP3 in Groningen, Nikolaj Kunsthallen in Copenhagen, Lab for Electronic Art and Performance, Berlin, Interaccess in Toronto, FACT in Liverpool, and LACDA in Los Angeles, among others.

Alex received his MFA(Hons) in Interactive Media & Environments at The Frank Mohr Instituut of the Hanze University of Applied Science in Groningen, The Netherlands in 2009.

In addition to making all sorts of weird stuff, Alex is an Assistant Professor of Interaction Design at Creighton University in Omaha, NE.

Alex also occasionally mentors at the Kent Bellows Studio and Center for Visual Arts and give talks and workshops about Games, Interaction Design and New Media Art.