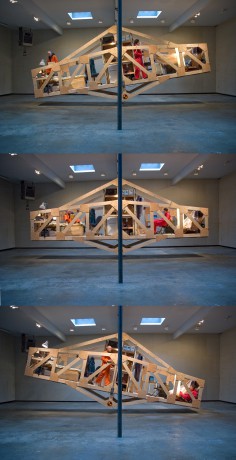 source: alexschweder
Negotiations of space are played out everyday by everybody. From the intimacy of families to the geopolitics of nations, our desires for closeness or separation are given form through walls and doors, borders and check points. Stability, caricatures this reality by making a plumb and level space dependent on the position and weight of the two occupants in relation to one another. Like a sea-saw, this work is a long beam with a central pivot. Two live / work structures will be located at either end of the beam. They will be different in design and character depending on the desires and habits of the two artists creating the piece, but balanced when unoccupied. Made in collaboration with Ward Shelley.
.
.
.
.
.
.
.
.
source: designboom
berlin and seattle-based architect alex schweder la creator of ‘performance architecture’, manipulated small-scale occupied spaces which alter the perception between visitors and their environments. the constantly shifting or peculiarly scaled installations intend to bring attention to the connection between a subject and architecture.
over the course of the architect’s career, a series of international exhibitions with site-specific creations have challenged the boundaries of reality and reverie, eventually blurring their division and producing a new experience.
the ‘stability’ installation featured a conceptual dwelling for two individuals which shifted in sea-saw motion as the inhabitants moved about within their half. communication and collaboration between them is necessary to balance the weight and create a level floor plane. the ‘snowballing doorway’ features two stacked and mirrored portals which are inflated and deflated in an alternating manner. visitors are first introduced with a narrow and passable doorway and then presented with an inverted and inherently blocked passage.
.
.
.
.
.
.
.
source: alexschweder
Alex Schweder works with architecture and performance art to complicate the distinction between occupying subjects and occupied objects. These projects include Practise Architecture at Tate Britain, Flatland at New York’s Sculpture Center, Its Form Follows Your Performance at Berlin’s Magnus Muller, A Sac of Rooms All Day Long at the San Francisco Museum of Modern Art, Counterweight Roommate in Scope Basel, Roomograph at the deCordova Museum, and The Rise and fall in the Marrakech Biennial. The Pollack Krasner and Graham Foundations have funded his projects. Schweder is the author of Stalls Between Walls included in Ladies and Gents, the Gendering of Public Toilets and Performance Architecture included in Urban Interiors. He is a three-time artist in residence at the Kohler Company and was in residence at the Chinati Foundation and American Academy in Rome. Schweder has been a guest professor at the Southern California Institute of Architecture, Pratt Institute, and the Institute for Art and Architecture in Vienna.
.
.
.
.
.
.
.
source: the-gopher-hole
Biography: Alex Schweder La’s projects have been exhibited internationally including the Netherlands Institute of Architecture, Henry Urbach Architecture in New York, The Sculpture Center in New York, the San Francisco Museum of Modern Art, and Magnus Muller in Berlin. He is the recipient of numerous awards including a Rome Prize fellowship in Architecture and a Pollock-Krasner award. Schweder La holds a masters degree in architecture from Princeton University and has taught at the Southern California Institute of Architecture in Los Angeles.