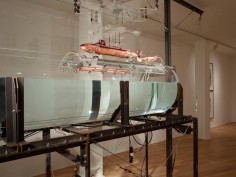 Sea Stories, addresses ideas of performance, documentation and re-enactment within a much more playful vein. Here through film, wall texts, drawings and photographs, Ponomarev recounts his various collaborations with the Russian navy, such as a work for which the artist gained permission to paint an active nuclear submarine in anti-camouflage. This action is also repeated within the gallery in Base, a nine-metre kinetic work involving a motorised model submarine that undergoes a chameleonic transformation when submerged. Base rather eloquently manages to dance between the comedic and the controlled: Ponomarev’s first action of ‘exposing’ the nuclear submarine is retold within the childlike safety of a see-through tank, and a weapon of ultimate devastation becomes a brightly coloured toy.

Sea Stories also includes a series of self-portraits drawn while the artist was aboard an arctic research vessel. Ponomarev describes these drawings, which have been distorted by being submerged up to 4,000 metres below sea level, as works made in collaboration with the sea. While each distorted self-portrait is elegantly displayed in its own hanging case, they are more important as remnants or artefacts left from Ponomarev’s performance/exchange with the sea than as objects on display in a gallery. The emphasis on process is further heightened by the inclusion of photographs that document Ponomarev packaging the portraits into pressurized containers that are then exposed to the compressing force of the ocean, a series of actions which had to be repeated for each portrait. Much like Base, these portraits toy with the idea of play and repetition as a means through which to understand a desire for control and child-like fascination with the incomprehensible power of the sea.
.
.
.
.
.
.
.
.
source: designimpossible