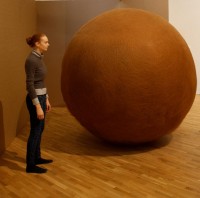 Alice Anderson’s giant installations created out thousands of feet of red colored doll hair are a thing of wonder. Selected for its relationship to her own bright red hair, Anderson selected the material to refer to her childhood where she invented rituals based around her hair to calm her anxieties when left home alone. Draped over buildings, walls, and every imaginable surface, Anderson’s work is just as much about reinterpreting an everyday material as it is about coming to terms with the ghosts of her youth.
.
.
.
.
.
.
.
.
source: artvantgarde

British filmmaker and artist Alice Anderson creates work by concentrating on her childhood from where her obsession of doll’s, and particularly hair, comes from. Her installations reflect her mother/daughter relationship during her isolation in her childhood. During that time Anderson would invent rituals to calm herself down by making threads out of undone seams – later her own hair – and twirling them around her own body and objects. As a natural red-head, she solely focuses on using red doll hair to make small and impressive large scale sculptures.
.
.
.
.
.
.
.
.
source: ianah