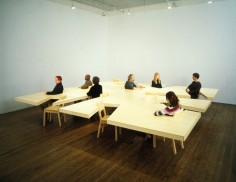 If the world does not exist without us then it can be thought of as an extension of ourselves, expressed in systems. It has to be thought of that way anyway, since we are the ones thinking it. Architecture is the most basic of these systems, essentially because it involves establishing a place for ourselves, or oneself, whether one is an architect or not. Of course, architecture is inevitably mediated and determined by other systems–religious, social, political, commercial, musical, chemical, etc.–but none of these is as immediate or physical as architecture, which is materially coexistent with us and can be touched. Walls, floors, and ceilings measure our space, our limits, just as other systems do immaterially. The more we know, the more limits we have, and architecture literally defines our limits.

A dome represents the sky, the universe, less accurately, perhaps, than what we have come to know about the shape of the universe since the dome was invented, but accuracy is not necessarily the point. We are surrounded and extended by buildings and groups of buildings, within which we devise an epicenter (the décor of our private space and thought) from which unfold our relationships to everything beyond us. We are reminded that the closer one comes to reconciling self and non-self, the further one is from actually achieving reconciliation. For one thing, we come up against the very materiality that is so comforting. The alternative to maintaining distinctions is confusing self and non-self, which we label paranoid schizophrenia.
Allan Wexler’s work assumes the form of heroically practical attempts to bridge the gap. It is both comedy and tragedy that the contradictions become even more pronounced, that our existence is also our isolation. Too Large Table (16 feet b y 16 feet) is too large because there are too many possibilities for interaction and non-interaction, and it is impossible to reconcile so many possibilities, except that they all take place at the same flat, horizontal expanse of the table. Thirteen chairs are part of the structure and actually hold the table up. When people are seated in the chairs they can look at and talk to the person opposite or perhaps even at an angle, and basically communication is both anarchic and mathematically determined by the diagram of the table itself. Still, the table could be, and of course in our experience is, even larger.

Proposal for Utopian Café (round), a small model for a lifesize project, solves the problems of unity and conformity by having chairs in a circle holding up a circular canopy. Now everyone looks toward the center and plays an equal role in supporting the roof, by which they are unified. But new problems are introduced. Everyone looks inward rather than outward, which may have pertinence in some modes of thought, but still involves turning one’s back on the outside. This is partly solved, with both new and familiar difficulties, in Proposal for Utopian Café (square), in which the chairs still hold up the canopy but are arranged in the more individualistic mode of Too Large Table.