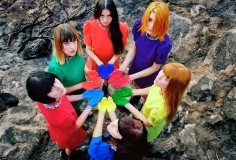 “This series was shot all analog in Idyllwild, CA, a one mile above sea level mountain community which was recently ravaged by a two-week fire. A group of 6 girls were sent in custom rainbow dresses made specifically for this shoot, to heal the blackened landscape. During a ritual with Holi powder, they made rain come from the skies on a very sunny day. The result of this true experience (!) are these images.” — Amanda Charchian
.
.
.
.
.
.
source: worksccsph