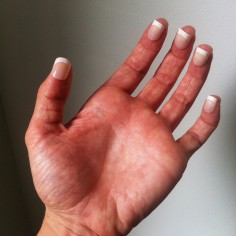 «Je trouve que l’humour doit être noir, et que l’obscurité appartient à l’humour. Il est important que mes œuvres aient quelque chose de drôle parce qu’à mon avis l’humour est la clé. Je veux que les choses ne soient pas prises au sérieux. », a déclaré Wellmann. » Ne fait rien si tu crois que ce que tu fais est voulu par le monde de l’art. Apportez votre propre monde dans le monde de l’art. »
.
.
.
.
.
.
.
source: badatsports
On a spring afternoon in grade five, a sexual education teacher visited our class to tell us about our bodies. Her lesson began with an exercise. “Place your palms together with your fingers crossed,” she instructed, holding up her hands at arms length. “Now undo your fingers. Interlock them the other way.” We watched as she unlaced each finger from right over left, to left over right, and did the same. “This is puberty.” Her demonstration was simple and strange. Your own fingers could become an unusual glove.
Puberty was understood as a temporary disruption that would eventually lead us to our true selves: young men and women. Having never rested comfortably within a binary understanding of gender, nor the sociological, cultural or capitalistic systems that perform its beliefs, I can still appreciate her demonstration for its subtle embodiment of imposed discomfort. At its core, puberty is grotesque in every sense; it lies between what has been and what is becoming. As a developmental stage, puberty passes but the associative feelings remain. “The grotesque body,” Mikhail Bakhtin wrote, “is a body in the act of becoming. It is never finished, never completed; it is continually built, created, and builds and creates another body. The grotesque body outgrows its own self, transgressing its own body.” Similarly, art can stage familiarity for its viewers in order to render them slightly stranger to themselves.

Mike Kelley suggested, “The literal use of material is an absurdity in art. No one would seriously consider the idea of sculpting a body out of actual flesh, or carving a rock out of stone.” Literalism in art is taboo for its redundancy, yet I admired our teacher for her resolve to substitute a body part in order translate bodily sensation. Paintings – figurative paintings of the realist tradition in particular – come dangerously close to this taboo. They fail when they forgo sensation for the boredom of conveyance, but every so often they approach the realm of substitution, touching us like a phantom limbs.
Nineteenth-century painters of the Western canon used varying modes of realism as an engine of self-understanding and renewal during periods of rapid social and technological transformation. Jean-Auguste-Dominique Ingres’ Neoclassicism sought a sense of harmonious order through softly inflated depictions of the (often female) body. Haunted by the marbles of classical antiquity, Ingres reached for marmoreal perfection but stretched the clay of his odalisques a few vertebrae too far. Their violence is often rationalized as technical virtue. I am an audience for whom these paintings were never intended, but I perceive their grotesque nature as their achievement, as it opens a space for a productive response that privileges vulnerability over knowledge, and feeling over understanding. And beneath their surface is a sense of yearning not unlike the ache embodied in classical antiquity, pointing to another order of being. As Wolfgang Kayser reminds us “…the suffix -esque indicates participation in a spiritual essence.”

Similar to Ingres’ paintings, the medium of porcelain attempts to embody a kind of essence. It rationalizes something invisible through imitation of the human form. Porcelain is comprised of numerous substances, most commonly kaolin clay or the stone petunse, but it is sometimes quite literally made from the ash of pulverized bones. In its raw state it is referred to as ‘a body.’ Once fired and vitrified by the kiln’s heat its body resembles the luminous surface of a cowrie shell, or porcella, which in Italian translates as young sow. This etymological connection stems from the visual similarity between the opening of a cowrie shell and the exposed genitalia of a female swine. The word’s origins were also likened by Edmund De Waal to the sound created by “the vulgar wolf-whistle after a pretty girl.” Porcelain possesses an almost sickly translucency that betrays its impervious and decorated exterior. It seduces and simultaneously confesses the procedures of its seduction. Like the grotesque body it is somewhere in between; soft and hard, surface and depth, sculpture and painting, working continually towards the discovery of itself.
Paintings behave like us. In light, they glisten like sweat. They crack and bend, they fade. A close inspection of their surface might reveal the pentimenti of a restless arm or the scar of a second head. Sometimes we x-ray them like bones. Paintings ought to be watched, rather than looked at, for they possess a life of their own to which we remain intimately connected in an atemporal present. Despite our intimacy with them however, they have never been fully fluent in body language. This is the grey territory where paintings become mostly about themselves and oddly, the space in which we recognize ourselves the most.

As women slowly wrestle the production of their own images away from men, so too do they wrestle with an uncertainty of what to do with them. And whose eyes their images are for. Seventeen million selfies are uploaded every week; twenty-four billion selfies plastered the surface of the Internet last year. It is an arena of physical exposure. The body remains the highly contested meeting point between subject and object, figure and ground, surface and depth.
As it passes through the mirror of social media, the body deforms, divides and multiplies. It performs its uncertainty, it is a body in the act of becoming, never finished, never complete, and continually rebuilt. Through the lens of the grotesque self-representation can be understood as a dialogue, rather than a monologue, porous, and open. It is participation as opposed to representation. Instagram images of our selves are as quick and transient as the platform of their delivery. Lashes and nails, braziers and lipstick, polish and panties are surfaces that seduce and confess the procedure of their seduction, and the substitution of one body part for another distorts our cultural conventions by reflecting them back to us. To visualize the irrational you must let the hand grow as much out of the finger as the finger grows from the hand.

Months after we witnessed that grade five demonstration we conducted similar, albeit racier experiments on one another in secret. “Put your palm up to mine. Now, take your thumb and index finger and use it to squeeze our middle fingers together. Slide it down both of our fingers at the same time.” We marveled at the numb and charged sensation of another person’s provisional limb.
Ambera Wellmann is a Canadian artist working in painting, assemblage, photography and video. Y