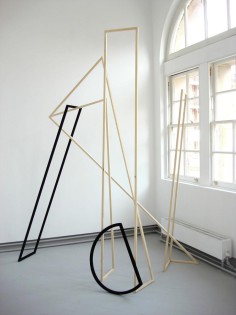 source: amystephenscouk
Amy Stephens’ work is fundamentally sculptural in both its form and content, taking for its starting point the tactile and expressive qualities of a range of materials. Contrasting the angularity of wood and metal with the soft tactility of fabric and flock, her assemblages occupy a space between the abstract and the associative, and between seduction and control. Sparse and inherently structural, they have a strong architectural presence and make a conscious nod to Modernist or Minimalist sculptural traditions. Rendering materials and objects found in nature through industrial processes such as bronze casting and wood planing, Stephens highlights the tension between the natural world and artificial methods of production. In this way the artist explores the symbiotic relationship between nature and human agency, and draws attention to their tenuous interrelationship through the creation of objects that are at once beautiful and threatening. Stephens’ sculptures are often a direct response to the architectural spaces in which they are exhibited, and arrest the viewer through their elemental physicality. They also uncannily hint at recognisable objects and shapes through elegant juxtapositions; some have an anthropomorphic quality, their lines and junctures approximating limbs and joints, while others evoke the animal world through appropriated objects such as bronzed deer antlers. The artist’s sensibility and thought process can be seen within the subtle, economic use of individually produced elements, and their arrangement within purposeful and engaging compositions. As powerful groupings, they announce the power of the natural world through the language of manufacture, and provoke a dialogue of materials and forms that demands the viewer’s attention.

Biography
Amy Stephens received her MA from Chelsea College of Art and Design, London in 2008. Recent solo exhibitions include Catching the Big Fish, Minibar Artist Space, Stockholm, Sweden (2013); Collide, Poppy Sebire Gallery, London, UK (2012); Restless Nature, Oonagh Young Gallery, Dublin, Ireland (2011); This Urban Silence, Irish Museum of Modern Art, Dublin, Ireland (2011). Recent group exhibitions include 009: Magiciens, Emmanuel Herve Gallery, Paris, France (2013); Sculpture al Fresco III, Marcelle Joseph Projects, Egham, UK (2013); Dividing Line, High House with Sumarria Lunn Gallery, London, UK (2012); Periodical Review 2, Pallas Projects, Dublin, Ireland (2012); Line, Poppy Sebire, London, UK (2011); No Soul For Sale – A Festival of Independents, Tate Modern, London, UK (2010); 195 Miles, Project Space Leeds in collaboration with the Whitechapel Gallery, London, UK (2008). Amy Stephens has recently been awarded the Triangle Network Fellowship to Muscat, Oman with Gasworks Gallery supported by the British Council (December 2013). Earlier this year, Stephens was invited to spend a week as artist in residence at the Aldeburgh South Beach Lookout run by Caroline Wiseman. In 2011, she completed a four-month artists’ residency at the Irish Museum of Modern Art, Dublin and in 2010, the artist completed an artists’ residency at the Banff Centre, Canada. She has work in several public and private collections, including the Zabludowicz Collection and the OPW State Collection, Ireland. The artist lives and works in London.
.
.
.
.
.
.
.
source: amystephenscouk
At the heart of Amy Stephens’ artwork is the symbiotic relationship between nature and human agency; of seduction and control; of minimalist precision. Her practice considers the relationship of both found and crafted objects whilst revealing the marks of the maker. There is a raw intimacy to her work that exists in the space between sculpture, assemblage and drawing. Stephens’ investigations of line, colour, texture and form reflect a confident aesthetic inspired by architecture and design.

The artist uses an array of materials that are strongly suggestive of urban living. Negation and structural isolation are recurrent throughout with objects and images finding form by layering registers of information. Stephens’ fragile sculptural assemblages are described as ‘tracings that form the basis of an architectural skeleton’ connecting one space to another whilst highlighting the fundamentals of drawing. She creates geometric portals and in-between spaces encouraging exchange round and through. Bright lines, bronze artefacts and playful intervention encourage the viewer to consider both the structure and surface material that form the basis of Stephens work.

Stephens was recently invited to be a member of the Royal British Society of Sculptors, London, UK.