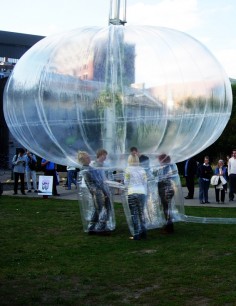 At any given moment of time five people are needed to inflate the structure. While the bodies of participants are squeezed and immobilized between two layers of clear vinyl, their heads can move and talk inside the inflated bubble. The duration of the piece depends on the five people’s agreement to end it, as no one can leave on his/her own accord.
.
.
.
.
.
.
.
source: escalesimprobables
Within the public and private discourse on communication the Conversation Bubble piece points out to different, sometimes absurd ideas of “agreement” and how our desires for “sameness” can create intolerance in acceptance of differences, whether it is on personal, family (group) or socially political levels. My piece refers to this conflict, which is part of human nature. Originally performed at the OMI International Artists Residency in New York State in 2006, and then in Norway in 2008, Conversation Bubble involves an inflatable structure for five people. At any given moment in time, five participants are breathing the same air while sharing a common space of the inflatable bubble. As their heads are free to move, the rest of their bodies are squeezed between two layers of vinyl. No one is able to leave on his/her own accord and the duration of the performance depends on the five people’s agreement to end it.
.
.
.
.
.
.
.
source: rewana

“When I am working on a problem I never think about beauty. I only think about how to solve the problem. But when I have finished, if the solution is not beautiful, I know it is wrong.”

For twelve years I have worked with inflatable objects exploring relations between portable architecture, the body and the environment. In contrast to the stable mass of monumental sculpture and architecture, my structures are air-filled, mobile and concerned with places and people that activate them. Incorporating various materials and biodegradable polymers, I harness technology to build public yet intimate experiences, fashioning them on function. A belief in new technologies as an opportunity for social transformation that inspired architectural groups from the 1960’s motivates me. These architectural groups addressed the question of global vision and the relation between environment and technology, issues that remain central to current discussion about climate change.

My artwork is inspired by Buckminster Fuller’s concept of Synergetics, which is a system of thinking that encompasses a multi-faceted approach towards life and design, seen not as a fragmented concept applied to various professional practices but as a creative process that lies at the heart of any human activity. Deeply concerned with the integrity of processes and ideas, I make objects that set a platform for social exchange, reflecting on growing environmental complexities in an increasingly intense globalization.

I am particularly drawn to Buckminster Fuller’s preoccupation with lightness and the weight of materials as a means to counteract excessive materialism and waste. The durability of inflatable materials still eludes us, yet their potential for both usefulness and playfulness is paramount. As an artist, I am interested in investigating the material potential of inflatables (durability, lightness, portability, thermal and structural properties, fabrication processes, material “memory,” biodegradability, etc.) but also the cultural and aesthetic implications of “lightness” (the possibility for humour, the likeness of inflatables to “toys,” their relationship to fashion and haute couture, “pop” culture, survivalism, colour, textures, prints and patterns, etc.). The interface of pneumatic structures with other systems, such as electronic, communication, and solar devices, also concerns me.

I see my artwork as a process of realizing intentions, in which “a failure” is just another departure point into new ideas. In this sense I see my process of art making similar to the process of doing scientific experiments – they do not always have to be ‘successful’. My objective is to induce different understanding through the creation of various platforms of interaction. It is the intention to fabricate meaningful habitation that is the driving force behind my works. I am aware that my artworks cannot provide all the answers to such complexities as living in the face of dwindling resources, environmental catastrophe, and social displacement but I believe in the power of imagination and an anti-entropic role of art. I am equally inspired by the visionary works of Renaissance artists such as Leonardo da Vinci, as well as modern inventors like Buckminster Fuller, who fused an imaginative sensibility with technical invention. I see my art practice as a bridge-building process between these two realms.
.
.
.
.
.
.
.
source: studioxxorg