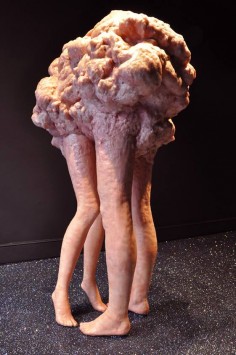 The two new works of the series ‘Irreducible Complexity’ offer
models of relational aesthetics that are undesirable at first glance in terms of the ideal tie between desire and the social sphere. The abject quality inhibits our instant desire to touch the soft and malleable surface. The works speak of nature, which reference existentialist moments within the repetitive scenario between power and struggle, consumed and consumer, subject and object, action and reaction in popular culture.
The installation consists of human scale sculpted wax figures growing into erupted intestines: the innermost inside turned out for all to see. Employing external and internal natural forms, the works are critical interpretations of the body as an idea and ideal that entwine with a personal interest and complex narrative, despite a removal of us from
them. Under a contextual framework, it is in these areas where humanity seems to suggest a greater even existential connection to the natural world. In ‘Dual Act’, we are instantly confronted with all that is human. These intertwined bodies appear to have almost wrestled themselves together: their existence is a balancing act. Despite the apparent chaos at first sight, this sculpture speaks of unity and discrepancy, beauty and debauchery, and ultimately, hope. In ‘Solo Act’, one is brought into a world that seems thoroughly concealed in the body politics, open only to itself encountering a forced existence. The complex narrative becomes simplified and transformed through a string of interpretations and
re-interpretations that at the same time exercises a degree of hope and collective desire.

Andrea Hasler was born in Zürich, Switzerland, and currently lives and works in London, UK. She holds an MA Fine Art from Chelsea College of Art & Design.Her wax and mixed media sculptures are characterized by a tension between attraction and repulsion, and highly influenced by artists like John Isaacs, Berlinde De Bruyckere and Louise Bourgeouis. Recent solo projects include ‘Burdens of Excess at Gusford | los angeles, ‚Irreducible Complexity’ and ‚Full fat or semi-skinned?’ Next Level Projects, London. Hasler’s work was recently exhibited at the 1st Santorini Biennale of Arts in Greece, 2012. Her recent solo exhibition Irreducible Complexity will be featured in the upcoming documentary Snapshots of Shoreditch, looking at the art scene in the East End of London. Hasler also chairs artist talks at Next Level Projects and regularly lectures on contemporary art, with a focus on women artist and the body, at various institutions including the Sotheby’s Institute of Art, London