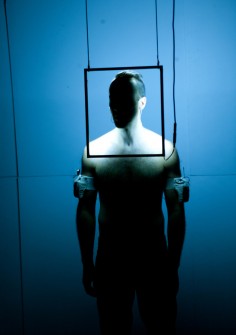 Conjuring a futuristic sort of shamanism, Andrew Schneider’s YOUARENOWHERE experiments with the virtues of sensory overload via quantum mechanics, parallel universes, and the “Missed Connections” board on Craigslist. Battling glitchy transmissions, crackling microphones, and lighting instruments falling from the sky, one guy on a mission and a tricked-out interactive new-media landscape merge to transform physical space, warp linear time, and short-circuit preconceived notions of what it means to be here now.

A man with a nosebleed appears, possibly from the near future, to tell us something. But mics crackle and break. Lighting instruments fall from the ceiling. Signals get scrambled. Transmissions glitch. Modes of communication malfunction as something unseen prevents a man from telling us the thing that will prevent his imminent future death. The space collapses in on itself and we’re left with two parallel universes.

YOUARENOWHERE short circuits our perception as it imagines the awe and discomfort of meeting oneself. What happens when you view yourself from the outside? How do you hold on to yourself when confronted with an exact replica? Which one is real? Which one is you? And what happens now?
.
.
.
.
.
.
.
source: youtube

Andrew Schneider has been creating original works for theater, video, and installation since 2003. Rooted at the intersection of performance and technology, Schneider’s work critically investigates our over-dependence on being perpetually connected in an always-on world. He creates and performs solo performance works, large-scale dance works, builds interactive electronic art works and installations, and was a Wooster Group company member (video/performer) from 2007-2014.

Currently, Andrew is developing YOUARENOWHERE, which will premiere in January 2015 as part of PS122’s COIL festival. Recently he is also the recipient of the Tom Murrin Performance Award, and will be creating a new experiential light and space performance piece (currently titled Unified Field Theory) as Artist-In-Residence at Dixon Place Theater and in cooperation with Abron’s Arts Center throughout 2015/16.

Andrew’s original performance work in NYC includes FIELD (2014), TIDAL (2013) curated by Laurie Anderson as part of the River to River festival; YOUARENOTHERE (work-in-progress, 2013) at the Performing Garage; WOW+FLUTTER (2010) at The Chocolate Factory Theater; five AVANT-GARDE-ARAMA! works (2005-2013) at PS122; PLEASURE (2009) at Issue Project Room; and resident artist (2006) at LEMURplex. His work in Chicago includes TRUE+FALSE (2007) and STRATEGIES AGAINST ARCHITECTURE (2008) among others, both at The University of Chicago as a resident artist.

Andrew creates wearable, interactive electronic art works such as the Solar Bikini, (a bikini that charges your iPod), and wireless programmable sound effect gloves. His interactive work has been featured in such publications as Art Forum and Wired, among others and at the Center Pompidou in Paris.

Andrew also works with various musical acts including Fischerspooner (projections/performer), Kelela (projections/lighting), and AVAN LAVA (lighting/percussion/vocals). Schneider has served as an Adjunct Professor at NYU and has taught courses on Technology and Performance at the Interactive Telecommunications Program and at Bowdoin, and Carleton Colleges. Andrew holds a BFA in Theater Arts from Illinois Wesleyan University and a Masters Degree in Interactive Telecommunications from NYU. He lives in New York City.