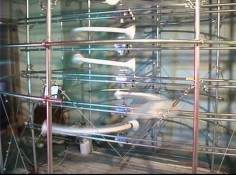 The Whirly-Bot looks like a massive, trembling turbine and sounds like sniffing a thousand magic markers all at once. It creates voice-like music using a sound-producing physical phenomenon not used in any other musical instrument.

The sound is created by whipping air through corrugated plastic tubes. Each corrugated bump creates vibrating vorticies that energize a standing wave running the length of the tube. Faster movement creates higher energies, shortening the wavelength of the standing wave. So each carefully-tuned tube can create a scale in harmonic series. Each tube’s fundamental note lies in standard chromatic tuning. But each tube’s upper notes lie in the harmonic series, creating an airy/eerie tension in the tuning.

I designed the Whirly-Bot and built many prototypes in a string of frantic all-nighters with help from Bill Tremblay, Erik Nugent and many friends.
.
.
.
.
.
.
.
.
source: artsmitedu

A graduate of MIT’s Media Lab, Cavatorta has designed an array of robotic musical instruments including the BloBot and Whirly-Bot. Most recently, he created four unique Gravity Harps for Bjork’s nature-themed album Biophilia, which premiered at the Manchester International Festival. Each is a three-meter-long pendulum with a cylindrical harp on the end. Gravity is used to set and synchronize the musical rhythms while computers control the sequence of notes. Through the design of such complex and experimental instruments, Cavatorta explores the ways in which we create meaning through sound.

Andy Cavatorta is a New York-based designer and inventor focusing largely on interactive design, robotics, and film. His most recent work includes a year-long collaboration with Bjork. Other major collaborations include robot control systems for Amorphic Robot Works, aspects of Nearlife’s Virtual Fishtank, and interactive design and programming for the Museum of Science exhibit Star Wars: Where Science Meets Imagination. Learn more about Andy Cavatorta.