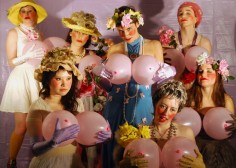 Photographer: Angela Washko
.
.
.
.
.
.
.
source: angelawashko
Angela Washko is an artist and facilitator devoted to mobilizing communities and creating new forums for discussions of feminism where they do not exist. Her practice is research-based, employing data as a storytelling tool to create prototypes for actions by others. “Misusing” software, Washko attempts to intervene on public opinion regarding proper etiquette, appropriate lifestyle choices, limited gender designations, and encourages a re-thinking of how we establish US and THEM.
.
.
.
.
.
.
.
.
source: angelawashko

In her recent video, Washko satirically utilizes imagery and materials reminiscent of the French Rococo to question the era’s notion of a beauty achieved through the excessive accumulation of costly, frivolous objects and draws a parallel to contemporary American society’s breast fixation and sex-driven marketing tactics. Her film sets and installations are primarily constructed with re-used Dollar-Store materials that are marketed as “disposable.” Washko’s performances and video projects reconsider excess, gender, advertising, waste, and notions of productivity while employing eye-popping colors, vibrant materials, repetition, and reenactments to act as electrified wake-up calls for drowsy consumers.
.
.
.
.
.
.
.
source: vimeo

Angela Washko is a New York based artist and facilitator devoted to mobilizing communities and creating new forums for discussions of feminism where they do not exist. These forums are created through actions, interventions, videos, and performances- sometimes in video games. Her most recent project includes the founding of The Council on Gender Sensitivity and Behavioral Awareness In World of Warcraft – earning her the Franklin Furnace Fund Grant, the Terminal Award and Grant, and a Danish Arts Council Grant. Fond of creating institutions with long names and lofty goals, she also founded The World of Warcraft Psychogeographical Association, another in-game organization which she plans to expand into an artist residency program inside the video game. Washko’s community organizing practice has transformed into a curatorial practice as she recently curated “The CONFLUX Festival 2012” at New York University, “Deconstructing the Habit” and “HABIT: A Video Festival” at Spattered Columns in SoHo, “Why Participate?” at Flux Factory, and the lecture series “Expert Oddities” at venues in NYC and Troy, NY. She has participated in artist residencies at Gullkistan (Laugarvatn, Iceland), Contemporary Artist Center at Woodside (Troy, NY), Flux Factory (NYC), and The Fabric Workshop and Museum (Philadephia, PA). Her projects have been written about by Time Magazine, The Guardian UK, Hyperallergic, Rhizome, the New York Times, Digicult and more.
.
.
.
.
.
.
.
source: fluxfactoryorg
Through an interdisciplinary practice spanning performance, video, collaborative actions, and installation, Angela Washko investigates how attitudes and stereotypes regarding the representation of women manifest in narratives within media, advertising, video games, and the foundation of American lifestyle. Her works look at what we passively consume in our environment and how everything from women to summer sunshine can be (and has been) commodified. In response she creates playfully critical videos which highlight the absurdity of accepting a feminine identity built on purchases and the representation of women in the media. Frequently deconstructing objects that have already been introduced into culture, her works are a call-to-action, bringing light to patterns and habits we have implicitly disregarded and demanding a drastic attitude change in our collective consciousness.

Washko has recently completed artist residencies at Flux Factory in NYC, Gullkistan in Iceland, Contemporary Artists Center at Woodside in Troy, and The Fabric Workshop and Museum in Philadelphia. Her work has been exhibited both nationally and internationally including most recently at The Rotterdam International Film Festival, Grace Exhibition Space in NYC, Spattered Columns in NYC, Garage Gallery in San Diego, Carnival of e-Creativity in New Dehli, Videopolis in Barcelona, and The Budapest Short Film Festival. Her practice has earned her Elizabeth Foundation for the Arts’ Welcome to New York Award and articles in Rhizome at the New Museum, the New York Times, Time Out NY, the Huffington Post, All That We’ve Met, and Staten Island Arts.