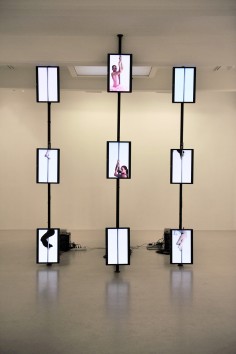 Ann-Sofi Sidén has previously portrayed people in video works such as “Warte Mal!”, “Who told the chambermaid?” and ”In Passing”. ”Same Unknown” differs from her previous works in that it has no dialogue or spatial context. Hierarchies have been dissolved, everyone is equal, torn from their contexts but united in a kind of clinical hyperrealism: every gaze, torso, hip, every clenched hand and tensed muscle, every footfall has a specific meaning. Like a story without beginning or end. Together, they form a kind of flowing document, hieroglyphics formed by human bodies dressed in western fashions.

“Same unknown”, from 2008 was filmed with the assistance of the citizens of the city of Reggio Emilia in Italy for the exhibition “Human, all too human”, for Fotografea Europea, 2008. The video work was shown there as a site-specific installation and is now included in the city’s art collection. The version “Same Unknown (strain 1, 2 and 3)” was originally shown during the Venice biennale in the exhibition “Fear Society”, in 2009. Sound production was by Jonathan Bepler. “Kretslopp” was filmed at the same time as the work “My country (somewhere in Sweden)”, from 2010 that was based on the 38 day, 720 km long journey on horseback from Stockholm to Skåne that Ann Sofi Sidén undertook together with a colleague in 2009.

AFTER THE FACT
After the Fact (2007) and The City Stones from the series CODEX (1992) are two individual pieces. Time as well as material separates them but they both describe potential ways to enter and exit Ann-Sofi Sidéns practice. Together they form an opportunity for diverse interaction.

After the Fact is a series of photogravures that describes a young woman’s inexorable actions and a contemporary stigmatised institutional function. The series consist of video extracts and complementary stills from the work in passing – a video installation that is shown simultaneously at Bonniers konsthall.

Ann-Sofi Sidén has developed a printing method that correlates to the opposing logic within the video work. The picture suite retains filmic qualities by the adaptation of a Technicolor mood and the work is carried out in a format that resembles the structure of a film synopsis. In several diptychs we are invited to follow two parallel stories. One part describes a young mother that for an unknown reason abandon her newborn baby in a ”Baby-Klappe” at a hospital in Berlin. The other part portrays the baby and how it is cared for within the hopital structure. Without judging or moralising, Ann-Sofi Sidén lets us alternately follow their fate just after the separation.