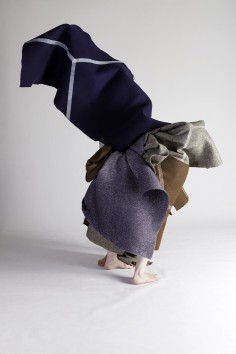 source: suttongallery
Box of Birds derives from an archive of 38 pictures of female patients who were photographed in a Sydney psychiatric hospital in 1948. Ferran discovered this archive by accident more than a decade ago in a public library (it should not have been there and has since been removed).

While acknowledging the emotional and ethically challenging nature of the archive, Ferran felt strongly drawn to it, and in 2003 she exhibited several bodies of work (Insula, 1-38, Anybody) developed from this source. More recently she has revisited the archival portraits with the desire to unleash more of the power lying latent in them. “As a believer in the residual power of the past to unsettle the present, I wanted to investigate the capacity of photography and performance to do this kind of work.” Anne Ferran, 2014.

Ferran has collaborated with dancers Tess de Quincey, Victoria Hunt and Linda Luke, from the Sydney-based company De Quincey Co, who employ lengths of dyed and painted felt to cloak, extend and distort the shape of their bodies. The felt refers to institutional garb, while the strong white painted lines, reminiscent of garment templates, serve to transform these cloaks into simplified abstract forms. Held up individually to the camera, these blankets are mask-like, even uncanny.

In a smaller number of works, the performers improvise, each session commencing with two or three bodies huddled under loose pieces of felt and concluding when all the felt drops to the ground. Ferran intended that out of this unpredictable process previously unseen images could emerge.

The title Box of Birds happens to be a New Zealand expression, almost unknown in Australia, for joyous exuberance or wellbeing: ‘How are you today? Box of birds!’ To Ferran it suggests something else – “the fluttering energy of unquiet spirits in a confined space.”