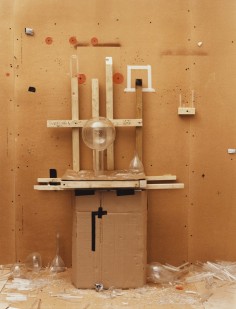 Anne Hardy is a British artist born in 1970, best known for her large-scale photographic work of unusual interior spaces.
Hardy’s images appear to be photographs of existing places but they are quite the opposite. They are actually carefully constructed sets, created by the artist in her studio, which she then photographs. The subjects of Hardy’s artworks are usually objects or junk which she has found in markets, DIY shops, urban skips or jumble sales. The type of objects she chooses have ranged from large antlers, brightly coloured cables, old Christmas trees, light bulbs, American basketballs, orange balloons, scientific test tubes and even butterflies. Hardy puts these everyday objects together and transforms them into unusual, almost dreamlike, environments which can be unnerving with their themes of abandonment and desolation.
.
.
.
.
.
.
.
.
source: saatchigallery

Anne Hardy’s photographs picture depopulated rooms that suggest surreal fictions. Working in her studio, Hardy builds each of her sets entirely from scratch; a labour-intensive process of constructing an empty room, then developing its interior down to the most minute detail. Using the transient nature of photography, Hardy’s images withhold the actual experience of her environments, allowing our relationship with them to be in our imagination. The painterly aspect of Hardy’s work is exemplified in Drift: an image of a buried room. The room’s spatial qualities are almost completely negated, flattened by the camera’s aperture into a self-consciously pictorial surface. The extreme lighting of the scene both intensifies and diffuses the objects’ textures giving the control panel an impasto effect, and the ‘earth’ the soft feel of impressionistic brush marks. The sparse furnishings conceive the scene in terms of geometric abstraction, a metered tableau of hard-edged shapes and affected concentrated colours.

In pieces such as Cell and Untitled VI, Hardy’s dense interiors become sites of wonder and unease as seemingly miscellaneous found objects compile with an obsessive and meticulous order. Hardy’s subjects exude the not-quite-right ambience of dreamscape or madness; a sensation heightened through the unnatural intensity of artificial light. Printed in large format, Hardy’s photos give the viewer a sense of looking through a window at these spaces. Hardy’s work transforms sculpture into photographic ‘paintings’. Though her scenes are built in actuality, their compositions are developed to be viewed from one vantage point only and it’s only their 2 dimensional images that are shown. Hardy uses the devices inherent within photography to heighten her work’s painterly illusion. In Cipher, aspects such as the hazy aura around the fluorescent lights, faux grotto walls, and the spatial defiance of the hanging ropes, give allusion to gesture and drawn lines.

Through her intensive process of set building Hardy engages with ideas of theatricality, fiction, and performance. Her scenes suggest not only elaborate narratives of place, character, and events, but also a meta-narrative of obsession and control in manifesting their fantasy – all for the solitary moment of the photograph. Unlike film stills, which represent an image of a linear and contextualised story, Hardy’s photographs compound a sense of disjointedness and isolation. Their hermetic aura and invitation to scrutiny affirms their uncanniness or ‘unrealness’. Building offers a surveillance room for forensic study, its wall of monitors broadcasting yet another world within its imagined scene, a further layer of embellished construction, reflecting on the fabricated nature of all realities.