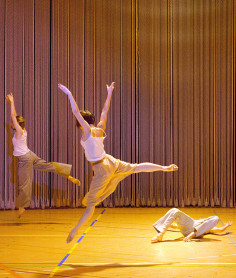 source:rosasbe
Rain, set to Steve Reich’s Music for 18 Musicians (1976), is one of Anne Teresa De Keersmaeker’s most characteristic performances. With this vibrant choreography, De Keersmaeker returned, in 2001, to two of her great loves: pure dance and the minimalistic music of Steve Reich. Accompanied by the pulsating tones of his music, for an hour and ten minutes ten dancers occupy the stage, delineated by a curtain of fine strings, displaying an impressive succession of virtuoso dance phrases. The mathematical figures, the sustained repetition, the geometric occupation of the space, the art of continuous variation – everything that had gradually become the choreographer’s signature was pushed to the extreme in Rain.

In Rain, De Keersmaeker approaches the company of dancers as a close-knit group of pronounced individuals who, one by one, play a vital role in the whole. Seven women and three men allow themselves to be propelled by an unstoppable joined energy that binds them together. It’s a bustling network in which breath and speed is shared as well as that special comradery that forms when you are beyond fatigue.
.
.
.
.
.
.
.
source:theguardiancom
Rain was created in 2001 by the Belgian choreographer Anne Teresa de Keersmaeker, for her dance company, Rosas. The 70-minute piece is a response to Steve Reich’s minimalist composition Music for 18 Musicians, played live here by the Ictus Ensemble. As De Keersmaeker has demonstrated in works such as Fase and Drumming, she’s fascinated by the architecture of Reich’s compositions and the challenge of creating movement that reflects it.

In Rain, De Keersmaeker attempts more than a deconstruction of Reich’s score – she creates a dreamworld out of it. Set designer Jan Versweyveld draws an oval of illuminated space around the stage and bounds it with a hanging curtain of white ropes. Within this force field, all is lightness and flow, as the 10 dancers run, fly and glancingly collide. There are playful capers, runs with loosely swinging arms, and flickering changes of direction. Momentary tableaux and friezes form, only to dissolve in the kinetic swirl.

The dancers’ lightness of being is underpinned by clear and focused intention. They frequently initiate movement sequences by leaning into the intended direction of travel until gravity swings them on their way. Sometimes, they catch themselves mid-sequence and propel themselves back in the direction from which they came. In one curious passage, female dancers softly butt each other in the midriff before being redirected and drifting away at a tangent. There’s no explicit narrative, but the dancers acknowledge each other’s presence with complicit smiles and gazes that meet and hold each other for a beat before moving on.

Dries van Noten is a designer who truly understands dance and his costumes, especially the women’s airy shifts and camisoles, cling and float precisely where they need to. The men, meanwhile, are sensibly shirted and trousered in buff and off-white. The dancers change costume several times in the course of the piece, so that we progress, as if in the course of a summer’s day, through nacreous shell pink and old rose to full-bloom crimson, thence to ivory and silver-grey. Versweyveld’s lighting is voluptuous, pouring unclouded into the performance space.

Abstract dance has given us many of these charmed, light-bathed spaces – scenarios that seem to hark back to a just-out-of-reach golden age and forward towards a sunlit humanist paradise. De Keersmaeker packages a compelling version of this fantasy, as attested by the standing ovation that greets the dancers when the lights finally fade to blackout. While I wish I could feel the love like the Rosas faithful do, I can’t help finding the grit in the utopian oyster. Steve Reich’s music is a miracle of structural and mathematical complexity, but it is possible to find it, for longish stretches, more than a little relentless.

De Keersmaeker builds up Rain by a subtle process of accretion, of detail layered on detail, but all too often the choreography shades from artlessly simple into plain uninteresting. The seven women fare better than the three men, whose moves are frequently banal and occasionally bathetic. Why, for example, does one of them, at a particularly atmospheric moment, take off his shirt and use it to scour his armpits? Anne Teresa de Keersmaeker is revered as a contemporary dance-maker and many of those watching Rain will want it never to end. Others will be quite happy to call it a night at 70 minutes.