immaterials
Data between visibility and invisibility 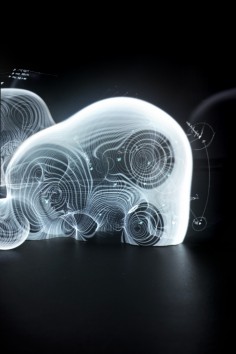 source: dejoost
Data is beginning to flow from of everywhere these days. As mobile devices continue to spread we’ve slowly and steadily begun mapping our world, through our own eyes. We’ve got geotagging and image sharing networks, but what about the stuff we can’t see, abstract things like electromagnetic fields?

The problem of seeing a room filled with data is more and more prominent and pressing for designers. Lev Manovich wants them to consider the ‘invisible’ space of electronic data flows as substance rather than just as void.
Anthony Dunne and Fiona Raby are mentioning the electro-climate and electrogeography in their inspiring and intelligent book Design Noir. Electromagnetic fields – and therefore data which are carried in them – are interacting with architecture in the same way like weather and airflow does. Are screens the most appropriate way of visualizing and interacting with data? Does location-based-service means opening-a-webiste-at-a-certain-place?
Manovich is concerned that “an electronic screen becomes simply a moving billboard or a moving ornament.”. Dunny and Raby are proposing to think about a Hertzian Space instead. “Whereas ‘cyberspace’ is a metaphor that spatialises what happens in computers distributed around the world, Hertzian Space is actual and physical, even though our senses detect only a tiny part of the electromagnetic spectrum”. To design for the Hertzian Space is to work with immateriality.
Which form of data and metadata is appropriate in an Hertzian Space? A place in front af a screen, situated in the physical space. Inspired by the work Fictional Radio Spaces by Ingeborg Marie Des Thomas, who tried to illustrate invisible electromagnetic fields, this project shapes fictional data using the photographic technique of procedural lightpainting. The illustrations are moving between technoid hologram and personal handwritten note.
This project was a collaboration between the design studio for generative design onformative.com and Christopher Warnow..
.
.
.
.
.
.
.
source: tecnoartesnet
Las hipótesis científicas aceptadas suponen que en el origen del universo existían materia y antimateria en iguales proporciones. El descubrimiento de la antimateria inicia una nueva era no sólo para la ciencia en el plano más pragmático y experimental, sino que además abre un nuevo campo para artistas y diseñadores deseosos de adentrarse en los más profundos misterios de la existencia y el cosmos, buscando la inspiración diaria
.
.
.
.
.
.
.
source: metamuseumtumblr

These curiously shaped gastrointestinal devices were created to elicit contemplation and debate on the future of food and the potential of (seemingly) inedible plants. In a future where conventional farming is impossible, designers Anthony Dunne and Fiona Raby imagine harvesting algae, roots, and leaves for food. Foragers facilitate the digestion and processing of the toughroots and cellulosic matter that many other mammals and birds subsist on. Worn over the head or on the body, these devices extend the limbs, mouth, or internal organs, acting as microprocessing units to assist our evolutionary processes.
.
.
.
.
.
.
.
source: we-make-money-not-art

In a diagram that attempts to clarify how we think about futures, futurologist Stuart Candy divides one amorphous space of futureness into Probable, Preferable, Plausible and Possible futures. Fiona Raby an Tony Dunne’s exhibition at the International Design Biennial in Saint Étienne, focused on the area of the Preferable. They believe that while designers shouldn’t decide for everyone else, they can play a significant role in discovering what is and what isn’t desirable.

The design proposals exhibited through models, photographic scenarios, videos and 3D texts don’t have the ambition to tell us what exactly our future will be. Instead, they ask “what if…”, inviting us to reflect on the kind of technologically mediated world we wish to live in.

4 scenarios were shown at the biennale: Foragers is a reflection on the future of food in an overpopulated planet; both Stop and Scan and EM Listeners responds to the UK’s unique tolerance for extreme state intrusion which allows the police to use a lack of privacy laws to create a living laboratory; finally, Afterlife is a domestic product for a time when euthanasia is far more common than it is today.

Foragers responds to the United Nations’ warning that the world is running out of food. The UN’s Food and Agriculture Organisation calculated that we need to produce 70% more food by 2050 to feed a projected extra 2.3 billion people. Yet, governments, industries and citizens alike continue to ignore the distress signals, over-populate the planet and use up its resources.

In this first scenario, a small group of hackers, guerilla gardeners, garage biologists, and synthetic biologists take their fate into their own hands, look beyond what is available in food stores and start building their own electronic and mechanical devices to harvest and even digest new types of food that are already available around us. They would use synthetic biology to ‘externalise’ their digestive system in order to be able to digest leaves, grass, pond plants and other things that only the body of animals can process at the moment.

A second scenario, Stop and Scan, comments on the way surveillance has become a convenience in our society. CCTV cameras of course but also loyalty cards, travel cards and Big Brother-style reality shows have acclimatised us to social transparency. Our minds are the last private space we have.

Scientists are working on a number of technologies that attempt to decode what we are thinking. Although this is still a long way off, they would like to be able not only to read our thoughts but to affect them too.

In the Stop and Scan scenario the mind becomes a new site of interest for the state, requiring new protocols of ownership, access, protection and transparency. Police carry out random stop and search scans near crime scenes. Using a special scanner, people are shown images that only the criminal could know about. The device is based on brain fingerprinting technology where a scanner detects a characteristic electrical brainwave response whenever a person responds to a known stimulus. If the person being scanned appears to recognise an image, a light glows and they are taken away for further processing. Domestic versions are used by parents on their children. Employers use them on employees.

The EM Listeners scenario would bring Echelon to the street. Em-listeners move through public spaces, they scan telephone calls, emails and anything else sent over the spectrum. Their highly visible antennae are intended to deter any subversive activities. Their presence is accepted because it means less risk from terrorists.

Finally, Afterlife is a domestic device for a time when euthanasia is far more common than it is today. Medical technologies may have extended life spans but they have not increased quality of life. It’s not too difficult to imagine a time when people opt to take their own lives at the appropriate moment. All sorts of variations on suicide machines may evolve to cater for a huge range of emotional, psychological and metaphysical circumstances. Who would have thought that doctors would eventually work with technologists to develop new and humane ways of dying?

Between Reality and the Impossible is not just a series of designs, it is also an experiment in how to exhibit conceptual design proposals where the narrative and ideas are as important as the designs. Models, photographic scenarios, videos and 3D texts worked together to sharpen the atmosphere and give additional layers to the scenario.

The ideas for each proposal were translated into objects by the designers. Next, writer Alex Burrett (check out his book of short stories, My Goat Ate it’s Own Leg) interpreted them through stories. Jason Evans followed with photographs that make the immediate context of the scenarios clearer. It was then up to the visitors to join the dots and fill in any gaps.

Between Reality and the Impossible was curated by Fiona Raby and Tony Dunne and commissioned by Constance Rubini for the International Design Biennial in Saint Étienne, France.
.
.
.
.
.
.
.
source: dunneandrabycouk

Dunne & Raby use design as a medium to stimulate discussion and debate amongst designers, industry and the public about the social, cultural and ethical implications of existing and emerging technologies.

Anthony was professor and head of department/programme at the Royal College of Art in London between 2005-2015 where he set up and led the Design Interactions programme. He studied Industrial Design at the RCA before working at Sony Design in Tokyo. On returning to London he completed a PhD in Computer Related Design at the RCA. He was a founding member of the CRD Research Studio where he worked as a Senior Research Fellow leading EU and industry funded research projects. Anthony was awarded the Sir Misha Black Award for Innovation in Design Education in 2009.

Fiona is professor of Industrial Design (id2) at the University of Applied Arts in Vienna as well as reader in Design Interactions at the RCA. She studied Architecture at the RCA before working for Kei’ichi Irie Architects in Tokyo. She also holds an MPhil in Computer Related Design from the RCA. She was a founding member of the CRD Research Studio where she worked as a Senior Research Fellow leading externally funded research projects. She taught in Architecture for over 10 years.

Their projects include, Hertzian Tales, a combination of essays and design proposals exploring aesthetic and critical possibilities for electronic products (MIT Press 2005); Placebo, a collection of electronic objects exploring well-being in relation to domestic electromagnetic fields (2001); and Technological Dreams Series: no.1, Robots (2007). Design Noir: The Secret Life of Electronic Objects was published by Birkhauser in 2001. Speculative Everything: Design, Fiction and Social Dreaming will be published by MIT Press in 2013.

Their work has been exhibited and published internationally and is in the permanent collections of MoMA, the Victoria & Albert Museum, Frac Ile-de-France and Fnac (Fond national d’art contemporain), as well as several private collections.