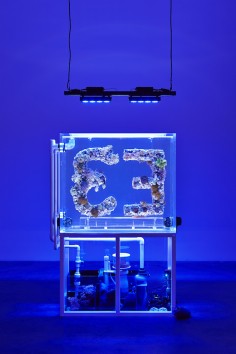 Catala is a multi-media artist with a Licence de Mathématiques Fondamentales from Université Paul Sabatier in Toulouse, France, a BA in Sonic Arts from Middlesex University in London England, and a BA in Fine Arts from London Guildhall University in London, England. Catala’s work for the Triennial titled ‘Distant Feel’ (2015), explores empathy, ways that images provoke feelings, and how we express ourselves in our daily lives through digital technology.
The sculpture ‘Distant Feel’ (2015) is made in a ‘living medium’ and is an illuminated aquarium in which (E3) logo, created with Droga5 advertising firm, is grown from live corals. According to Miller Gallery’s press release, the artist is interested in ‘our psycho-physical relations to images and how the ecosystem of images that we create–and surround ourselves with–deeply changes us.’ On his website for the project, he writes: ‘empathy is core to our biology, our evolution, our culture, our society. It is the raw, unprocessed emotional connective tissue between people. It is the glue that holds the human race together. It is the original OS.’ He also cites a psychologist’s study on the sharp drop in empathy levels among US college students in the past 10 years and adds, that ‘it’s paradoxically OK to be distant and encourages us to express our empathy in an effective way…via all means of communication.’
.
.
.
.
.
.
.
source: 179canal

“I was born into a world ruled by TV. But today, TV as we knew it is dying: it is no longer the overly dominating medium it once was.

So it seems fitting to start the prelude to the eulogy. I open it with the retinal impression that TV has left on me, the sounds it has imprinted into my mind. Not the TV of the good old days, but the TV of now, the familiar companion to our day-to-day lives.

This show is about the TV stream that we live in and how it permeates our brains. In order to take a closer look at this stream, I attempt to “solidify” it, by either focusing on a moment, an image or spatial structure.

I recompose the TV stream in four ways: a 12 feet high drawing of TV Doodles, an architectural model of a TV set based on real-time observation, a painted HD TV screen and 2 massive TV Blobs, projected trompe l’œil shapes spinning in the exhibition space.

TV is like a collective dream, a dream filled with fears and desires. Today I act as a filter to the TV stream, and in a last gasp, I merge my own consciousness to this collective one.”

French born, New York-based artist Antoine Catala first began experimenting with digital artifacts in 2003, through a technique that intentionally causes compression errors in digital video, which often plague satellite television, streaming internet videos and other digital environments. In his 2008 video installation, Couple in a Garden, a young couple stands in front of a wall covered in foliage, as the camera pans and zooms digital compression errors create streaks of distortions and color. The dissonance of the video’s music, composed by Olivier Alary, further heightens the disconnect between the figures and their environment.