Stitching The Stories We Dare To Tell 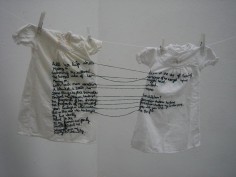 In the centre of Martyrs’ Square in downtown Beirut, Lebanon, is a statue depicting a woman, one arm bearing a torch aloft, the other around the shoulders of a young boy. The statue is riddled with bullet holes from the wars, uprisings and political unrest that have pockmarked the 69 years of Lebanese independence. A photograph of the landmark crops in on the two figures whose bullet wounds have been carefully, tenderly stitched over in a variety of multi-coloured bandages. Another view shows the woman completely wrapped, Christo-like, in red thread. These interventions by Aya Haidar, on photographs printed on linen (both from the series ‘The Seamstress’, 2011), illustrate the artist’s method of both highlighting and concealing the marginalia normally overlooked in both the images and narratives of the country’s troubled past.

Though of Lebanese heritage, Haidar has never been a permanent Lebanese resident. Using stories told to her when knitting with her grandmother and accounts of friends and people the artist has met in Lebanon, Haidar reconstructs her own versions of historical events through re-imaginings that float between the historically symbolic and the personally significant.

Central to the artist’s practice is an acknowledgement of participating in a process of handing down or passing on – both the stories told to her by her of the situation and history of Lebanon – as well as the traditional techniques of embroidery that Haidar employs. Recycling used materials such as her own shoes in the series ‘Soleless’, 2010, or manufacturing bars of soap produced in the Middle East, each containing the pips of the Medjool dates grown widely in the Jordan valley of the West Bank, in the work 121 Settlements, 2010, the artist highlights the re-appropriative potential of items normally discarded and the politically charged status of such commonplace goods. A stretcher made of welded bike frames and inner tubes Defunct, 2007 similarly underscores the transformative function of tools – one born of necessity in areas of conflict where a makeshift stretcher becomes whatever is ready-to-hand.

The main installation in ‘Behind Closed Doors’, Unhinged, 2011, speaks of the geographical restrictions that are a day-to-day reality in contested areas with constant border restrictions and roadblocks. By the slightest of interventions the artist renders redundant the purpose of the doors by the removal of their handles. A means of access becomes mere obstacle, highlighting the artificiality of the boundary created as well as the ease with which it is both erected and, potentially, dismantled.
.
.
.
.
.
.
.
source: ayahaidar

My investigation of the limitations of a visual language within fine art leads me to explore the fundamental elements of language that contribute to a story. This overlap plays on one’s senses of memory and imagination. I place myself at the centre of the work, both physically as the object and emotionally as the subject.

My current work focuses on the recycling of found and disposable objects making poetic works that explore loss, migration and memory, with a particular focus on the Middle East through the histories contained within aged, and culturally specific objects. I further develop this aspect of re-using objects to re-create narratives, to explore memory with a focus on older objects from previous generations. This idea of the development of a generational craft work that spans time, at once explores hand me down skills, stories and community, and by extension, cultural specificity and intercultural nature of British society.

My focus on developing inter-cultural dialogues is a vital step in the support of offering alternative ways to see the world, and initiate debate and dialogue about the globalised world we live in. I see my work contributing to dialogues around global cultures, media and questions of identity, both national and personal. I explore whether the durational aspect of craft, more so than other artforms, expresses concepts of time, through the way in which the hand of the artist is inherent within the medium. Alongside this a consideration of whether the voice is inherent within craft and its histories, alluding to feminist narratives by bringing the domestic into a more discursive platform. By reviewing history, authorship and authenticity, Cultural and historical customs are drawn out. Networks are re-worked where the material shapes the way the viewer identifies with stories and engagement can happen. Stories are recounted, history, authorship and authenticity are again revisited.
.
.
.
.
.
.
.
source: calliegarp

How do you describe the work Aya Haidar (b. 1985) creates? Textile? Sculptural? Installation? She began with a painting, 2-d sort of focus during her BA from Slade School of Fine Art UCL, London. Then, while in a study abroad program at the School of Art Institute in Chicago, she had a sort of pivotal experience that turned her onto textiles and sculpture. She went on to complete a masters program at LSE (London School of Economics).