grounds for standing and understanding 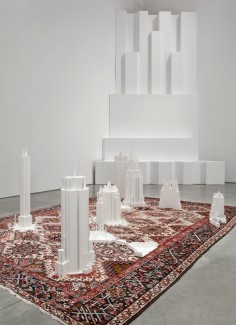 Babak Golkar is a multi-disciplinary artist whose practice, at its fundamental roots, takes aim to deconstruct, recontextualize and rearrange our perceptions of the world around us. Marked by an intellectual iconoclasm and an unbridled philosophical spirit of inquiry, many of Golkarʼs works mischievously reveal that the fixity of meaning is merely an illusion, which he systematically disassembles and exposes. Like Zen koans, Golkarʼs work seems to arrive at new understandings by setting up impossible questions; ultimately focusing on the nature of truth; a truth unobstructed by the oppositions or differentiations of language, or perspective.

This is not to say, however, that Golkarʼs approach is purely cerebral. Mixed within his take on Gestalt multistability and reification is a sharp Duchampian wit. Take, for example, “From God to Malevich,” which, as the titles suggests, riffs off Kazimir Malevichʼs spiritual, Suprematist ideology surrounding the cube (in particular, his own iconic “Black Square.”) Paying homage to Malevichʼs temporal philosophies, in particular the concept of the weightless and relative “fourth dimension,” which he posited in opposition to Renaissance perspective, the piece uses the lenticular lens to collapse multiple perspectives into one picture plane. The visual trope, typically used within advertising to animate static images, essentially allows a viewer to visually travel 360 degrees around a black cube, while physically traversing astraight line, from left to right, and vice versa.

On one level, the piece creates a literal parallax, revealing the complexities and subtlety of ocular culture, human perception, and the seeming rift between mind and body. But the piece also describes the heart of Golkarʼs investigation; the notion of fluidity, of simultaneous truths, shifting visions. Hegel has written that “subject and object are inherently mediated so that an epistemological shift in the subjectʼs point of view always reflects an ontological shift in the object itself.” Here, perspective has been elegantly “shifted,” literally and metaphorically. Or, as Lacan wrote more simply: “Sure the picture is in my eye, but I am also in the picture.”

Herein lies the strength of Golkarʼs visual language: the ability to maneuver between seemingly oppositional realms–East and West, politics and revolution, subject and object, Modernity and antiquity, Minimalism and ornament. Using a kind of visual jiu jitsu, Golkar inhabits seemingly oppositional realms, playing ideologies off each other to expose their respective congruencies and inconsistencies. Ultimately, Golkar exposes not the dialectical relationship between polarities; but rather poeticism in the world around us.
.
.
.
.
.
.
.
source: thethirdline

Born in the United States, raised in Iran and having lived between Canada and the Middle East since 1996, Babak Golkar has developed bodies of work, which attempt to maneuver and negotiate the space between these cultures. Examining the tension between pre-modern and modern traditions is often the direction of Golkar’s research, which often results in production of drawings, objects/installations, videos and performances.

Golkar’s works juxtapose specific Modernist tendencies, such as the use of Minimalist language in modern architecture, against very specific traditions of the Middle Eastern culture, such as the use of patterns found in nomadic Persian carpets. It is through this kind of juxtaposition that Golkar proposes cross-cultural reexamination and possibilities of dialogical contemplations on new forms and meanings.
Golkar has been actively presenting works in solo and group exhibitions in North America, Europe and Middle East. Most recently he has exhibited at Charles H. Scott gallery in Vancouver, presented a commissioned installation at the Victoria and Albert Museum in London, as well as, taking part in an exhibition at the Macedonian Museum of Contemporary Art, Thessaloniki, Greece. Golkar was a shortlist and selected as one of the finalists for the 2011 Jameel Art Prize. He currently lives and works in Vancouver.
.
.
.
.
.
.
source: gallerieswestca

There is a “sometime” rule in nature whereby patterns will repeat as fractals – a single leaf mimics the pattern of a branch, the branch mimics the pattern of a tree and so on. Some take this as evidence of a higher intelligence, and others as proof of life’s mechanical, blind, godlessness. But, whether fractals are expressions of divinity or merely of mathematical laws, they do exist (to the human eye) as evidence of beauty, of some mysterious “rightness.” What child, on realizing a leaf from the fern frond is a miniature of the larger thing, doesn’t stare a little in wonder?

And it’s that wonder, I’d argue, that Vancouver artist Babak Golkar mines in his installation at the Charles H. Scott Gallery. The central imaginative moment in Golkar’s Grounds for Standing and Understanding is a Persian carpet that he’s covered with architectural models (in wood, painted white) of Dubai-worthy towers. The viewer quickly realizes though that these toy towers are actually three-dimensional extensions of the patterns in Golkar’s rug. It is an expression worthy of semi-psychedelic films like Pan’s Labyrinth, or perhaps simply the stories of Lewis Carroll. We instinctually imagine the towers rising, like so many loaves of bread, from the tightly scrolled and fugue-like patterns of the rug.

The rest of the gallery, a single box of a room, has been interrupted by a maze of white walls, a scaled-up version of the angles and patterns seen in those abstracted towers. The wall element (roughly finished, unfortunately) dominates the gallery-goer in the same way the gallery-goer dominates those tiny buildings on the rug.

Which brings us to the first kind of fractal Golkar’s work invokes. This is a standard fractal which expresses a regressive idea of scale the same way a fern leaf does. The rug holds an almost primordial codex, a simple, two-dimensional math. This is then expounded by Golkar’s model buildings though the patterns of the rug are still legible. When Golkar takes things one step further, making the walls of the gallery into even larger abstractions of the rug’s pattern, the viewer loses a sense of the pattern’s purity. As with life, we cannot see the pattern, the rules, and the logic of things, except during those rare moments when we’re granted a bird’s eye view.

But the second kind of fractal, and perhaps the more interesting one, is a play on time, instead of space. The art of the Persian carpet dates back at least to 500 B.C. That Golkar would find, encoded within the carpet, a blueprint for towers recently constructed in the Middle East is a kind of magic in itself. Dubai begins to look like a mere expression of some ancient cultural DNA.

Of course, the meaning or “message” of these ancient patterns is fuzzy at best, coming to us through the gauze of history and all the way from antiquity. But, then, ferns are much older than that. The beauty of fractals after all is the way they spin themselves inexorably out forever and forever. Even if we can’t properly read them, we can still marvel at the gifts they bring – be they a three-inch leaf or the 200-storey Burj Khalifa. The Burj’s architect, after all, was inspired by the organizing principles of a simple desert flower.