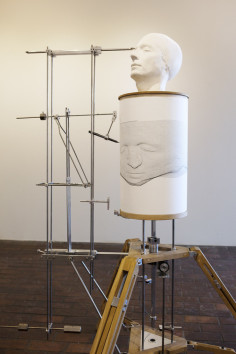 source: docgoldacuk
Trace II is a sculptural device that alludes to scientific discoveries and the experimental apparatus of science. It is essentially
a mechanical computer that draws its analogue programme from a revolving plaster head. The carefully balanced mechanism slowly measures the topography of a cast human head and translates its undulations onto a rotating cylindrical surface. The result is an evolving topographical diagrammatic depiction that is truly unique every time.
The work alludes to our notions of self and how through technology humans have found numerous visual representations for the individual. Medical advances have brought about well-recognised depictions such as DNA profiling, retina scans, MRI scans and 3d scanning. Trace II investigates the process behind the image making, and reconnects the viewer in a tangible way, with the process behind these fantastical images. Trace II is not only a drawing machine that draws emphasis on the human condition but also questions our ability to understand the ever increasing advances in technology around us. Trace II, uses
the more visually transparent and tangible technology of the past – more likened to the nature of the fingerprint – to allude
to technology of the present. In this respect Trace II attains a timeless characteristic, where the alienating nature of today’s technology is contradicted. Today so much of our technology comes through a screen from a complex array of codes and programmes that only a few can understand and even then it can be a less than fulfilling visual experience. This ‘technological alienation’ can often leave the viewer detached from the lengthy creative processes that lie behind the screen, constituting so much of a focus for digital artists today.
Trace II is a generative work where the artist’s head becomes the code for a complex mechanical algorithm. The plaster head is the ‘source code’ for the ‘Da Vinci’ – like contraption that literally feels the undulations of the human head and converts these features into a spiralling topographical map of the 3-dimensional object.
The structure of Trace II is open and the workings are transparent so the viewer is free to discover the process visually. The mechanism alludes to our advancing technology whilst it looks back in time, when technology was less alienating and more physical.
Trace II challenges a number of issues related to authorship of artwork: is it the product, the machine or the performance? Can or should all these be viewed independently? What are the implications of artworks being created in the artist’s absence? Is the drawing mechanism an autonomous machine that churns out artwork or is it a precise instrument or tool that the artist has control over, thereby maintaining the artist’s status as a decision maker?
Trace II reveals hidden patterns from natural forces that our surrounding world provides us with. The piece makes traces of these forces over hours and presents us with an event that is slowly unfolding in time, into an ‘act of creation’ where process, machine and product are one.
.
.
.
.
.
.
.
source: balintbolygo

Bolygó’s work explores the similarity between the artistic and scientific mind. His work explores how both minds are motivated by the same need to discover/uncover, and turn resulting ideas into totalities.

His work explores the artistic practice through a process of invention, science and engineering. His mechanical instruments become autonomous and investigate the making process independently. The relationship between the cyclic and predictable nature of the machine and the unpredictability of the human touch conjures up both notions of random chaos and universal order. With the elimination of the artist’s touch, the natural universal forces become the creators of the artwork and the emphasis shifts towards the ‘act of creation’ being the object of beauty. The machine’s process and the resulting images become inseparable dynamics of the work.

Steel weights, wires, motors and pulleys are transformed into mechanisms animated by natural universal forces. In constructing these devices the artist is creatively challenged to investigate how an underlying scientific structure or process can change or shape an object. The practical solutions to physical problems concerned with friction, weight, tension, and compression are all elements that give idiosyncratic aesthetic to his kinetic devices.

The mechanisms often explore the passing of time, and they record traces of particular events and movements on a surface – paper, metal, plaster, glass – through the build-up of complex patterns, highlighting the connection between space, matter and time.