AND THEN, ONE THOUSAND YEARS OF PEACE 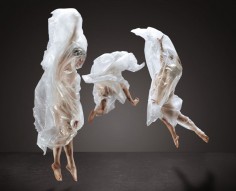 And Then, One Thousand Years of Peace is a huge, ambitious monolith of a work. First created by Angelin Preljocaj for the Bolshoi Ballet in 2010, it takes inspiration from the vision of apocalypse conjured by St John in the biblical Book of Revelation.

There are no horses galloping across the stage or horned beasts. But Preljocaj sets himself a barely less daunting task: choreographing the essential meaning of apocalypse, as a cataclysm so profound it lays bare the very essence and history of human nature.

Preljocaj launches his work with a shattering opening sequence. Ten women drive through hard, slicing, geometric formations; lights flash, electro-percussive music reverberates; and the air becomes as thick and swarming as a tropical thunderstorm as the movement accelerates towards its convulsive climax.

Out of this intensity emerges a Garden of Eden tranquillity, where men lope and flutter in delicately animalistic moves, and two women in white tunics play like lazy cherubs.

Preljocaj then fast-forwards to the world of the written word, his dancers moving with the stiff formality of priests, carrying books in their hands and gripping them between their teeth as if they were objects of impressive ritual power. In one of the best sequences of the work, slow, sweet music accompanies the dancers through a series of classically sculpted tableaux. It takes a while to register that their beautifully curved torsos and flung back heads are actually poses of disgusting violation and rape. The drapes they’re wearing are national flags: this is a ballet of war.

Preljocaj is a clever choreographer, superb at eliciting a raw, uninhibited physicality from his dancers, yet equally skilled at distancing the images of lust and anger he creates, and making them compellingly strange.

But, disappointingly, the second half of the work is less tight. Preljocaj focuses on the universal rather than the historic – choreographing dances of violent and needy instinct. The essentially episodic structure of the work not only emphasises the degree of repetition in much of his slamming sado-masochistic vocabulary, but the degree to which the entire work would benefit from a tough edit.

Still, the dancers are never less than brilliantly watchable. And in the end you have to love a choreographer whose concluding image of world peace is a stage covered with soaked and battered national flags, with two live lambs, bleating and gambolling over them.
.
.
.
.
.
.
.
source: edinburghfestivallistcouk

‘Revolution and revelation’ are two of the themes Angelin Preljocaj cites in his radical re-working of St John’s Apocalypse, a piece that beguiles both with the changing textures of its movement and the surreal beauty of its images, set to a scorching score by DJ Laurent Garnier.

The revolution starts off as a gender one. Nearly-nude women enter as a rapid fire cipher of changing shapes to a staccato strobe light. Soon they are suffocated under plastic wrap in a slow duet with cream-suited male counterparts. As their rocking pauses we are left wondering who is controlling whom, before the women shake off their polythene veils to cover the men.

These shifts in power come often in Preljocaj’s vision; between men and women, but also from the dancers finding power within themselves – his ‘revelations’. In one episode they begin flicking mechanically through books, then segue seamlessly into stretches full of dynamic life. In another, dancers with their faces smothered in flags of the world square up to one another in a stately tribal greeting, reminding us of primeval beginnings to modern boundaries.

A continuous hour and 45 minutes is a long time for the brain to keep taking in the richness and density of Preljocaj’s images no matter how arresting they are, and it does feel like each segment continues rather than progresses his ideas of an upturned landscape. His choreography, while ceaselessly imaginative in shape and velocity, and flawlessly executed, sometimes cries out for an emotional grip.

Where there is one, it is brilliant in its revelation of beauty and pain, not least in a duet that sees two men bite and wrestle with one another, drawing cries of agony, then dissolve into a kiss.
.
.
.
.
.
.
.
source: archiv2berlinerfestspielede

Angelin Preljocaj’s new creation continues his investigation of themes like mythology, religion and the rites of the everyday. The performance is a collaboration between his own company and the Bolshoi Theatre and will examine the Apocalypse in the original sense of the word, meaning »uncovering« [from the Greek »apo« meaning »away« and »kaly-ptein« meaning »sail«]. Preljocaj wishes to reveal what is hidden behind our contemporary rituals.
The French choreographer with Albanian roots will be supported by a remarkable artistic team: Subodh Gupta, one of India’s leading international artists – renowned for his sculptures which turn everyday objects into cult objects – is responsible for the set. The music comes from Laurent Garnier, one of the major names in techno music who has brought a sense of trance back to the dancefloor, like a modern ritual, an avant-garde ceremony with ancient roots. Igor Chapurin, a rising star in the Russian fashion world and a long-time collaborator with the Bolshoi Theatre, is responsible for costumes..
.
.
.
.
.
.
.
source: bamorg

“Preljocaj is a clever choreographer, superb at eliciting a raw, uninhibited physicality…”
—The Guardian (UK)
Sensual, dramatic, and daring is the world of choreographer Angelin Preljocaj, a sought-after master provocateur whose works have ranged from an erotic Snow White, featuring costumes by Jean Paul Gaultier, to a commission for New York City Ballet set to music by John Cage. For this work, Preljocaj offers an epic encounter with the end of the world, exploring the apocalypse as a revelation of the deepest truths of our being.Electronic music by influential DJ Laurent Garnier, mixed with samples of Beethoven, and a dramatic staging by renowned artist Subodh Gupta set the mood. Alternating between intense, slashing gestures and classical ballet, the 21 dancers of Ballet Preljocaj evoke the visions of life and death, calm and chaos, that have long kept us clamoring for redemption.
.
.
.
.
.
.
.
source: preljocajorg

Working within a poetic and impressionist vein, And then, one thousand years of peace relies on an assiduous but not irrational reading of the Apocalypse. One should thus refrain from looking for images or clichés that illustrate, directly or referentially, Saint John’s famous text.

A fertile source of interpretation, the very word Apocalypse (from the Greek apo: “to lift” and calypsis: “veil”) evokes the idea of revealing, unveiling, or highlighting elements that could be present in our world but are hidden from our eyes. It should thus evoke what is nestled in the innermost recesses of our existence, rather than prophesizing about compulsive waves of catastrophe, irreparable destruction, or the imminent end of the world.

When dance, the art of the indescribable par excellence, assumes the role of the developer (in the photographic sense), is it not most able to realize this delicate function of exposing our fears, anxieties, and hopes? Dance relentlessly highlights the entropy of molecules programmed in the memory of our flesh that heralds the Apocalypse of bodies. It stigmatises our rituals and reveals the incongruity of our positions, be they of a social, religious or pagan nature.

And then, one thousand years of peace wishes to graze these bodies that drift along blindly, tossed about by ideals and beliefs, somewhat lost between the lines of the Apocalypse.

Created in December 1984, the Preljocaj company became the National Choreographic Centre of Champigny-sur-Marne and Val-de-Marne in 1989.

In 1996, the ballet was welcomed at the Cité du Livre in Aix-en-Provence and became the Ballet Preljocaj – National Choreographic Centre of the Provence-Alpes-Côte d’Azur Region, the Bouches-du-Rhône Department, the Pays d’Aix Community and the City of Aix-en-Provence.

Since founding his company, now composed of 26 dancers, Angelin Preljocaj has created 45 choreographic works, ranging from solo to larger formations. The Ballet performs about 100 dates per year on tour, in France and abroad.

His creations have been restaged by numerous other repertory companies, from which he also receives requests to create new pieces. This has been the case with La Scala in Milan and the New York City Ballet, the Staatsoper in Berlin and the Paris Opera Berlin.

Beyond the repertory performances, the Ballet Preljocaj has been multiplying its local actions in Aix-en-Provence and neighbouring communities, in order to share its passion for dance with a broader public: lectures on dance interpretation through video, public rehearsals, contemporary-dance classes and workshops, and dance interventions in urban public space – all means of viewing and understanding dance from different perspectives.

2006 : the opening of a place for dance in Aix-en-Provence

The Ballet Preljocaj is now settled into its new home, designed by the architect Rudy Ricciotti in Aix-en-Provence. The Pavillon Noir is the first production centre built for dance, where artists will be able to go through the entire creative process, from workshops and rehearsals to staging and performance. The Pavillon Noir opened its doors on October 20, 2006. Angelin Preljocaj is the artistic director. Performances are programmed all year round, Angelin Preljocaj’s creations and also invited companies.
.
.
.
.
.
.
.
source: preljocajorg

Angelin Preljocaj was born in the Paris region, in France, and began studying classical ballet before turning to contemporary dance, which he studied with Karin Waehner.

In 1980, he went to New York to work with Zena Rommett and Merce Cunningham, after which he resumed his studies in France, there his teachers included the American choreographer Viola Farber and the French one Quentin Rouillier. He then joined Dominique Bagouet before founding his own company in December 1984.

His productions are now part of the repertoire of many companies, many of which also commission original production from him, notably La Scala of Milan, the New York City Ballet and the Paris Opera Ballet.

He has made short films (Le postier, Idées noires in 1991) and several full-length films, notably Un trait d’union and Annonciation (1992 and 2003), for which he was awarded the “Grand Prix du Film d’Art” in 2003, the “Vidéo-Danse” First Prize in 1992 and the Prague Video Festival Prize in 1993. In 2009, he directed Snow White, featuring his own piece, and in 2011 he signed, for Air France, the commercial L’Envol, based on the choreography of Le Parc.

Since then he has collaborated on several films of his own choreographic work: Les Raboteurs with Cyril Collard (based on the painting by Gustave Caillebotte) in 1988, Pavillon Noir with Pierre Coulibeuf in 2006 and Eldorado/ Preljocaj with Olivier Assayas in 2007.

Throughout the course of his career, Angelin Preljocaj has received numerous awards, including the “Grand Prix National de la Danse” awarded by the French Ministry of Culture in 1992, the “Benois de la danse” for Le Parc in 1995, the “Bessie Award” for Annonciation in 1997, “Les Victoires de la musique” for Roméo et Juliette in 1997, the “Globe de Cristal” for Snow White in 2009. He is an “Officier des Arts et des Lettres” and a “Chevalier de la Légion d’honneur” and he was appointed an “Officier de l’ordre du Mérite” in May 2006. He has received the Samuel H. Scripps/ American Dance Festival Award for Lifetime Achievement in 2014.

Since October 2006, the Ballet Preljocaj and its 24 permanent dancers have resided at the Pavillon Noir in Aix-en-Provence, a building entirely dedicated to dance, with Angelin Preljocaj as its artistic director.