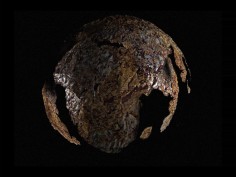 source: soundcloud
In an age saturated with soundalikes and retro throwbacks, the truly unique and unconventional can be hard to come by. Storming the 2011 scene with her self-titled debut album, Berlin-based Barbara Panther seems to embody these latter characteristics − and then some. The singer takes risks, blending musical influences and crossing boundaries of musical style innovatively and effortlessly, and the result is a journey through vibrant soundscapes, frenetic arrangements interspersed with moments of beautiful melancholy, and the creative explosion of elements of her past, the present and the future.
Rwandan-born Panther grew up in Brussels, Belgium, before making her home in Berlin five years ago. Describing the minimal role her background plays in her songwriting the artist explains; “I’m intrigued by the universe, water and the moon, and their interdependencies, which is noticeable in both the record’s sound and theme”. In addition to her strong spiritual interest in Mother Earth, Panther touches on themes such as existence in ‘Moonlight People’ and ‘O’Captain’, ethnicity on ‘Rise Up’ and religion on her first single ‘Empire’.
‘Empire’ is a song fraught with variety, tension, arching choruses and a staccato beat. It also incorporates a contrasting gentleness which illustrates well the album’s playful nature. Although her music eludes definition, Panther’s electronic ventures in new musical territories could be described as modern pop with avant-garde and baroque influences. Panther’s debut was produced by no other than Matthew Herbert, renowned house music maestro, also known as Radio Boy and Doctor Rockit. Having produced both Róisín Murphy’s and The Invisible’s debut albums, he has also worked with artists as diverse as Björk, R.E.M. and Yoko Ono. Together, Panther and Herbert create compelling sonic landscapes, designed to generate vivid images in the listener´s mind. “Matthew had the idea of throwing real chains against an electric heater which, in ‘Rise Up’, conveys the feeling of living in a prison in this world. However, the song ‘O’Captain’ communicates a very physical atmosphere as it gives the impression of being on the sea, literally feeling the wind on board”.
Despite the depth of lyrical meaning, the 12 tracks on Barbara Panther also allow room for all sorts of interpretation. Panther’s energetic and eclectic vocals blend elements of pop, rap and soul music, also incorporating an opera flavour on the track ‘Rollercoaster’. The latter song is full of skilfully arranged stylistic contrasts, combining a big band with playful synth and operatic vocals. Considering her offbeat style and the air of mystery surrounding Panther, it comes as no surprise that she has already been compared to the likes of Grace Jones and Bjork.
The singer’s futuristic, outstanding melodies and style are implemented into honest and passionate live performances, seeing Panther set her vocal stylings and expressive movements to visuals. To mark the occasion of the release of her debut EP ‘Empire’ on the same day, she played a one-off show on the City Slang stage at the Berlin Festival, accompanied by a five-strong live band of cellos, violins and trumpet, and is set to bring a little more of her own brand of voodoo to the stage in 2011!