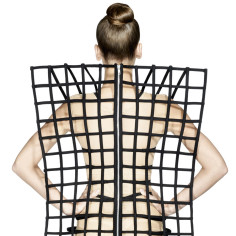 source: afterellen
Becca McCharen didn’t have a background in fashion, but she did know how to create things that are aesthetically inspiring. Having studied architecture at the University of Virginia, the out designer found a way to put structure into style that has now been on the bodies of the likes of Beyonce, Nicki Minaj and Madonna. Becca’s line, Chromat, had a hugely successful showing at New York Fashion Week earlier this month, and not only did the show have range in its concepts, but also in the models Becca used: a range of ethnicities, sizes and gender-identities. Becca is queering the fashion world and keeping things progressive with her futuristic designs.

Launched in 2010, Chromat has grown to include swimwear, lingerie and body cages. Most of the time these are in black or white or a combination of the two, but new materials keep the collections fresh and experimental.

“It definitely has a specific voice, especially me coming from an architectural background and not specifically from fashion,” Becca said. “It makes everything about the brand a little bit different because I don’t know the right way to have a fashion brand is and what the wrong way is. So I think that definitely makes it stand out.”

And Chromat does stand out, as it’s easily identifiable with no competitors making anything like it. While some might be intimidated by the eccentricity of the looks, Becca said that is what has people clamoring for more.

“We tried to make more basic pieces to go along with the crazier conceptual stuff but it just falls flat every time,” she said. “No one comes to us for basics. There are so many other people doing basics so we are kind of like, that’s someone else’s job. We’re lucky enough to be pushing technology and be pushing new materials and so we’re in a really cool place where no one expects us to do normal stuff. No one wants us to do normal stuff. It’s good. We’re definitely comfortable in our experimental realm. We wondered that too but people come to Chromat for a specific reason. They want to stand out, they want to be bold.”

One of Chromat’s new additions is the Chromat Curve line, which is for plus size women. It stunned on the catwalk at fashion week, and Becca said she’s gotten all kinds of positive responses about it thusfar.

“The Chromat Curve, specifically, is a new thing we’re starting because for so long we’ve been doing custom sizing in all our bras, going up to size G, and so now it skins of an official part of what we offer in store,” she said. “So it was a way to put it out there that we do do bigger sizing, it just hadn’t been a main focus of our runway shows. But now it is, which I’m happy about.”

Out genderqueer model Rain Dove and trans model May Simon were also part of the show, which Becca was so happy to have represent all ranges of “the Chromat woman.”

Becca is quick to mention she has a whole team working with her, and that casting director Gillian Smith part of what made the NYFW a success.

“I definitely have a huge team, it’s definitely not all me. I didn’t make every single garment on that runway by myself. It’s a big Chromat world that makes it all possible,” she said.

An out lesbian, Becca said she thinks she’s got a different perspective from her male counterparts in the industry.

“I did think about my own personal identity and how it relates to fashion, especially because I feel like all the big fashion houses—maybe there are a few that are female run—but they’re all dudes and most of them are gay dudes,” she said. “It feels like they’re playing with Barbies where I’m thinking about what I and my friends and people I love would wear. I guess it definitely relates to your perspective.”

A huge muse for Becca is Bjork, who she calls “my inspiration for everything in this world.” She’d love to see her work gracing the Icelandic performer’s body, and says they’re “really close” to making it happen: “It’s just a matter of time, hopefully.”

“The thing I love about Bjork, visually, is she’s changed so much,” Becca said. “Each album is so different from the one she put out before. It feels like she does a 180 from one album to the next and that’s what we hope to do with each collection: Just totally change up our inspiration and our visuals and keep charging ahead in every different direction and not stay the same.”

That is exactly what Chromat seems to be doing, ranging from last year’s Bionic Bodies to this year’s Curve. What Becca is excited about right now is wearable technology, something she’s experimented with but hopes to work with even more in the near future.

“This season we went to the wearable technology company called Misfits and they do this design that basically is a pedometer and activates to show you how many steps you’ve walked and how much you’ve slept,” she said. “I really like the idea of clothing as a way of making the body as a machine, and the body is producing data. In the future, once we have all this data from the body, we can use this data and the garments can react to that data and GPS that body where you are or if you’re hot or cold or where you want to go and make the garments active machines to help you through doing what you need to do. So I’m really getting into more tech stuff. I think that’s more fun. We’re also experimenting with new materials and weird shit we can find that’s fun for us. I think that’s the future for Chromat.”

What seems like a costly endeavor is made even more amazing by the fact that Becca built Chromat from the ground up with “no loans and no outside investors.”
“Everything we have has been built from orders from stores and different custom pieces,” she said. “Everything we’ve done from this point has been based on our sales and I think our technological advances are just the tip of what is to come and what we’ve been able to afford in materials. As we grow I think our material palette can expand a lot, which I’m excited about.”

What we won’t see, though, at least not anytime soon, is anything too colorful.”

“It’s really hard for us. For me, personally, I just—pink or a bright blue just feels weird,” Becca said. “This season we tried to include little dashes and diagonal lines of red and orange into the collection so that was in there in a little bit of details. But yeah, who knows? Maybe we’ll do an all red collection or something. I don’t know, it’s just so weird—it belongs in black. It’s already crazy enough!”