Caress of the Gaze 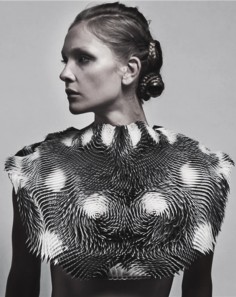 Wild animals have all sorts of ways of attracting the opposite sex. Some howl or perform complicated dances, peacocks and exotic birds are known for parading their bright feathers, and others will engage in deadly conflicts to beat out their competitors. As for humans, well, we flirt, wink, stare…and often resort to Tinder. Now, architect and interaction designer Behnaz Farahi has created a 3D printed wearable that provokes a sort of modern day mating ritual by detecting and then reacting to other people’s gaze with organic, life-like movements.

Farahi’s work has often used 3D printing technology to combine fashion, art, interactivity and bodily experiences. Her goal is to enhance the relationship between human beings and their environments. Previously, she collaborated with 3D Systems to design the protective Victorian collar Ruff, and more recently, we wrote about Synapse, a 3D printed headpiece that can respond to the wearer’s brainwaves.

For Caress of the Gaze, Farahi worked with AutoDesk, PIER9 (where she is currently an Artist in Residence) and MADWORKSHOP to create a kind chest-covering cape covered with a beautiful layer of feather-like quills. While they appear soft to the touch, the quills can actually detect the gaze of another (a man, as shown in the video below) and expand and contract as his eyes move around the body. A microcontroller connected to the cape’s camera can also detect the age and gender of the onlooker, perhaps helping the wearer to discern their motives.

Farahi used a Stratasys Objet500 Connex 3D printer to execute the responsive life-like design. This printer “allows the fabrication of composite materials with varying flexibilities [and] densities, and can combine materials in several ways with different material properties deposited in a single run,” said Farahi. This permitted her to incorporate both soft and rigid materials allowing for more dynamic movement, which was inspired very much by the flexible behavior of skin itself.
.
.
.
.
.
.
.
source: sputniknews

US architect and designer Behnaz Farahi 3D-printed a top that changes shape responding to the looks of someone staring at you.
The “Caress of the Gaze” outfit seems covered with quills resembling those of a porcupine, and they can flex and pulse revealing someone’s attention.
How does this magic system work? The top has a built-in hidden camera that tracks the eyes of a person nearby. It also determines the looker’s sex and age.
So in this demonstration, for example, the camera in the girl’s top picked up the look of a young man, whose age it assessed to be 26, and the outfit reacted by changing its form.

Where else could this technology be applied? Practically everywhere. Security forces could use it to catch the looks of criminals who seek to evade police, and people with poor eyesight could understand when someone is looking at them and reach a better level of communication.
Behnaz Farahi has won fame with her interactive devices.
She designed a 3D-printed helmet that moves and illuminates according to the brain activity.

The artist also created a responsive wearable that alters its shape when a model moves.

Among Behnaz Farahi’s other inventions is the breathing wall that changes its structure in response to a person’s touch on a Bluetooth mouse pad.
.
.
.
.
.
.
.
sourcebehnazfarahiprosite

What if our outfit could recognize and respond to the gaze of the other? This is an interactive 3D printed wearable, which can detect other people’s gaze and respond accordingly with life-like behavior.
.
.
.
.
.
.
.
source: behnazfarahiprosite

Behnaz Farahi is a designer, architect, and Annenberg Fellow at the USC School of Cinematic Arts. She is interested in interactive environments and their relationship to the human body. In particular she is interested in the integrated application of material performance, and smart materials in contemporary art/architecture practice. Behnaz Farahi has an Undergraduate and two Masters degrees in Architecture, and is now a PhD candidate on the Media Arts and Practices program at USC.
Behnaz Farahi has also worked with Professor Behrokh Khoshnevis on a NASA funded research project developing a robot to print structures on the Moon.
Her work has been widely published and exhibited. It has been selected for Skyline2014 in Downtown Los Angeles, ACADIA 2013 conference in Canada, ‘Sight+ Sound+ Space’ iMAP exhibition in 2013, ‘Design Intelligence: Advanced Computational Research’ exhibition in Beijing in 2013, the ‘Encoding Architecture’ exhibition in Carnegie Mellon University in 2013. In 2013 she was awarded first prize for the Kinetic Art Organization international competition.