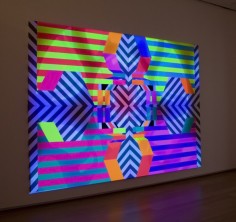 Pinning down the work of Ben Jones can be a hard task. Since first coming to public attention as part of the experimental arts collective Paper Rad, Jones’ work across the fields of video art, INSTALLATION, painting, animation and comic books has made him one of America’s most consistently interesting and nebulous artistic practitioners, with his firm grasp of design and sense of humour being the only constants in his ever changing and mutating oeuvre.
Men’s Group: The Video provides the closest thing we have to an overview of Jones’s complete body of work, presented in a spiral bound folder and throwing together comics, instagrams and paintings, designs and writing, in order to commemorate his last solo show at MOCA. It’s mixed-bag status is therefore assured and it should come as no surprise then to find that the quality of the content varies wildly. The opening collection of essays, poetry and interviews by such luminaries as Byron Coley, Dan Nadel and Gary Panter on the subject of ‘manliness’ went some way toward alienating its audience, coming across as smug and in-jokey. However the book’s clean sense of space and design ensures that it’s always handsome to look at and the essays are easily skipped should the reader wish to progress to the more interesting sections.

The first up is a collection of photos of Jones’ video paintings. Consisting of combinations of red, blue and green light being shone onto a painted surface, they have a garishly psychedelic effect; eye-bleeding combinations of pinks and neon greens fractalising and bursting on the painting’s surface. But unsurprisingly for such an accomplished draughtsman it’s Jones’ sketches and comic BOOKS that really grab the attention. Whimsical, whilst never being fey, and confusing while never being merely confused, Jones’ comic work demonstrates his complete mastery of his own idiom, one built out of his unique combination of his obsessions and influences. His clear interest in spirituality is on show throughout, many of the pictures featuring images of fakirs or wizards and having about them the same kind of mystically charged air that can be seen in the work of Ron Rege Jr. albeit crossed, mingled and winkingly debunked by Jones’ obsession with kids cartoons and scatological humour.
Ben Jones, Men’s Group- The Video. Image courtesy of Picture Box.
Ben Jones, Men’s Group- The Video. Image courtesy of PictureBox.
At first glance, Jones’s output can appear gnomic and impenetrable but stick with it and rhythms and patterns of dialogue begin to loom out of the murk of scratchy, deliberately crude looking line drawings. He specialises in surprising the viewer and a series of photos taken at the exhibition demonstrate just how well his unique approach and aesthetic translate into other art forms. His love of garish colour and solid sense of design ensuring that none of his work is ever less than arresting. On some occasions, it even becomes strangely moving, capturing a beguiling sense of childish innocence and a pure joy in the simple meeting of form and colour.
.
.
.
.
.
.
.
source: themodernorg

For years, Jones has sharpened his skills by working as an animator and comic BOOK illustrator. Consequentially, his work has a colorful and playful visual language. Jones’ artwork reflects the wide-ranging influences that inundate the artist (and viewer) in their daily experience within contemporary society. The artist levels the playing field for such disparate references as minimalism, video games, dogs and “The Simpsons,” by equally favoring all in his work, and in so doing, he slyly merges high art with popular culture in a present-day vocabulary.

Jones currently lives and works in Providence, Rhode Island; he is a member of the acclaimed East Coast artist collective Paper Rad. He has shown internationally on his own and with Paper Rad. Jones was recently in exhibitions at the Museum of Contemporary Art (MACRO) in Rome, Italy; Museum of Modern Art in New York; Deitch Projects in New York; and Andreas Melas Presents in Athens, Greece.
.
.
.
.
.
.
.
source: benjaminqjonesorg

Ben Jones DEITCH PROJECTS In Ben Jones’s New Painting and Drawing, a slim book of images published last year by PictureBox, song lyrics by the noise rock band Polvo serve as an epigraph (and the volume’s only text): “Show me something round and I’ll analyze the form / Teaching us the code that makes us crack.” In his second New York solo show, a smart, energetic installation of drawings, paintings, light boxes, sculptures, and digital videos, Jones makes form – specifically, fundamental geometric shapes – his primary medium; his aim is to reveal the elements shared by diverse constructions of meaning.

In Ben Jones’s New Painting and Drawing, a slim book of images published last year by PictureBox, song lyrics by the noise rock band Polvo serve as an epigraph (and the volume’s only text): “Show me something round and I’ll analyze the form / Teaching us the code that makes us crack.” It’s hard to think of a more apt description of Jones’s practice. In his second New York solo show, a smart, energetic installation of drawings, paintings, light boxes, sculptures, and digital videos, Jones makes form – specifically, fundamental geometric shapes – his primary medium; his aim is to reveal the elements shared by diverse constructions of meaning.

On the surface, Jones’s art doesn’t stray far from the zany fluorescent pop-surrealism of Paper Rad, of which he is a member. His new body of work is populated by symbols of the occult, including, in NDA Video 1, 2009, a cranky, bedridden wizard-king who must “mentally” change the channel on his television because he’s lost the remote control. However, Jones’s examination of his imagery is more sophisticated than Paper Rad’s, as the four pentagrams displayed at the start of the exhibition illustrate: Two are hung upright, a positive symbol in pagan and Judeo-Christian belief; the other two are hung upside down, and this easy reversal endows them with an opposite and sinister meaning. Yet by exhibiting both versions together, Jones cancels out the meaning of each, producing a dissonance literalized by the stars’ thin strips of vibrating neon colors. Elsewhere, the pentagram is shown partially collapsed, recognizable but thoroughly emptied of its original significance, which depends upon its five-point shape. The show’s title, “The New Dark Age,” likewise overlaps contradictory ideas – “new age” and “dark age” – nullifying them as separate terms.

Essential shapes are also seen in a group of prints displaying three “Ben Jones Approved Patterns”: rows of rectangles, concentric irregular polygons, and three sound-wave forms. The patterns build into complex and meaningful images, and, in doing so, acquire physical dimension. The rectangles, for instance, are silk-screened onto wallpaper as flat shapes resembling ladders, and then appear as three-dimensional objects – actual ladders – hung on an adjacent wall. Once the pattern enters Jones’s video work, it becomes virtual, or multidimensional, able to move through space and time. In NDA Video 2, the “ladders” act as a kind of rolling assembly line, shuttling unconscious humanoid figures across the screen. Here, Jones complicates form with matter, bringing together inorganic and organic constructions. The figures, composed of the sine-wave “approved pattern,” are vivisected to reveal their internal workings, which resemble an intricate network of rhythmically pulsing, bulbous, sinuous intestines. NDA Mush Robo Video, 2009, shows three pyramids, which Jones calls “mush robos,” likewise made up of the sine-wave pattern and likewise possessing elaborate and elegant inner systems, but ones that are hard-edged and exacting machines. The contrast is enforced by a difference in production: The unconscious figures and the mush robos are rendered in Flash animation, which produces flat fields of undifferentiated color; the machines, however, were created using a threedimensional animation program, a more advanced tool allowing for a greater sense of depth through more precise line work and detailed color gradation.

Jones’s rich, tightly conceived work has affinities with Peter Halley’s minimalist Day-Glo geometries and Jim Nutt’s blobbed, baroque figures, but his aesthetics are more closely tied to those of his contemporaries who came out of the late-’90s Providence scene, particularly the Fort Thunder group. His flat, neon palette and dense network of forms are like those of Forcefield and Brian Chippendale, and the schematic feel of his compositions (in any medium) recalls C. F.’s drawings in the graphic novel Powr Mastrs. In tracing the lineage further, one finds indebtedness (in all of these young artists) to Gary Panter’s pop-cultural mashups and visual assemblages. But then Jones might see Panter’s inventory of references – “the big flood we are all swimming in” -as one big wave.