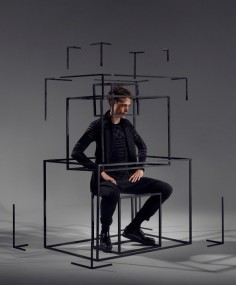 According to them, “this project relates to the concept of the digital identity, as a philosophical dialogue between the human form and the immaterial representation of our digital selves. Metallic installations serve as metaphors of representations in the digital realm: enveloping and changing our identities, emanating as an material aura“.
.
.
.
.
.
.
.
source: bensandler

Working in the intersection of art, technology, and commerce, Ben Sandler is an image-maker concentrated on crafting concept-driven narratives through photography and film. Born in Israel, Ben spent his formative years growing up in the Arizona desert. After earning a BA in Philosophy, he moved to Paris to study the visual arts at Gobelins, l’école de l’image. Later, he spent the better part of a year at Wieden+Kennedy’s creative incubator in Amsterdam. Currently, he serves as the Managing Director of the creative agency, Bonsoir Paris.