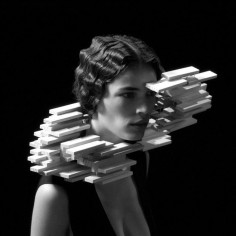 benjamin seroussi is a paris-based filmmaker specialized in fashion films and music videos.
he studied at the ucla film school in the late 1990s and has been making music videos since 2001; artists for whom has has done videos include autokratz,yuksek, das pop, oh la la, and the swedish artist mai.
in the mid-2000s, seroussi became interested in exploring the possibilities of fashion film, and his clients in this domain have included showstudio magazine, belvedere vodka, swarovski, lvmh group, cacharel, see by chloé, l’oreal, galeries lafayette, martin margiela, maxime simoens, alexandre vauthier, lacoste, l’officiel magazine, vogue italia, and intersection magazine. he recently directed the digital campaign for bulgari and the brand/tv campaign for french cosmetic company caudalie.

seroussi’s work is about exploring new formats and processes. he often creates his own filming tools and has a passion for both current and obsolete technologies. one of the things that makes his work unique is that he uses creative manual techniques during shooting rather than adding effects in post-production; this gives his work a timeless analog feel that distinguishes it from the current media climate. a firm believer in the magic of collaboration, he established solid relationships with leading designers, art directors, cinematographers, choreographers, and musicians. with complex choreography, innovative editing, and manual filter techniques, seroussi’s music video for keren ann and his experimental film “divine proportions” (presented by nowness.com) are perfect examples of his ability to harness the creativity of his collaborators while bringing his own creative vision to the forefront.
.
.
.
.
.
.
.
.
source: featherofme

KAPLINSKI is the title of a short film created by filmmaker Benjamin Seroussi in collaboration with a French architect David Tajchman. They perfectly complement each other, presenting architectural structures that cover the bodies of the models as if they are in prison or just wear a garment. The structures immediately fall apart when touched. The film explores an artistic dialogue between fashion and architecture. KAPLINSKI introduces models Marie Meyer and Caroline de Maigret, as well as musical artist Benjamin Clementine. The soundtrack was composed and performed by Dougy Mandagi and Toby Dundas, members of Australian band The Temper Trap.
.
.
.
.
.
.
.
source: blendedfr