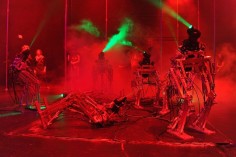 source: billvornconcordiaca
DSM-VI is a logical following to our artistic approach of creating artificial worlds and entirely robotic systems. This time, we want to create a universe that stages creatures expressing symptoms of “abnormal” psychological behaviors and stuck with some serious “mental health” problems, such as neurosis, psychosis, personality disorders, paranoia, schizophrenia, depression, delirium, and other forms of behavior and mental disorders. The project title is inspired by the famous reference manual published by the American Psychiatric Association, the DSM-IV.

The DSM-IV (Diagnostic and Statistical Manual of Mental Disorders) is considered to be the bible of modern psychiatry. Sometimes glorified sometimes highly criticized, it is a depictive work that describes and classifies human behavior disorders and mental diseases. Version IV of the DSM has been published in 1994 and then revised in 2000. Version V is actually in preparation and should eventually be published in 2012. With this project, we are proposing version VI. Like some of our previous works that were conceived around the idea of “the misery of the machines” (see La cour des miracles), the DSM-VI project wants to pursue our creative work on the metaphor of the living by now investigating the notion of a “psychosis of the machines”.

The installation is presented as a “tableau vivant”, a vast and complicated labyrinthic space that reminds of the cages of a zoological garden or the corridors of a lunatic asylum. In this strange universe made of metal scaffoldings, electrical cables and suspended ducts, vague and evasive shapes can be seen through the haze. Mysterious creatures inhabit this place, sometimes totally uninterested when the viewers walk by, sometimes completely gone wild and crazy because of this intrusion in their intimacy.

The robotic creatures are the characters and actors of this singular interactive allegory. They are built in order to evoke dysfunctional or absurd behaviors that make believe in the disease that they internally bear. These machines are abstract structures made of aluminum, plastic and silicone, with no deliberate intent of visually representing anything. Above all, they are machines and it is mainly their behaviors that give them an organic and living aspect. In this strange universe of responsive but awkward robots, we encounter schizophrenic machines, machines with multiple personalities, autistic machines, delirious, phobic and paranoid machines.

Based in Montreal, Bill Vorn is active in the field of Robotic Art since 1992. His installation and performance projects involve robotics and motion control, sound, lighting, video and cybernetic processes. He pursues research and creation on Artificial Life and Agent Technologies through artistic work based on the Aesthetics of Artificial Behaviors.

He holds a Ph.D. degree in Communication Studies from UQAM (Montreal) for his thesis on Artificial Life as a Media. He teaches Electronic Arts in the Department of Studio Arts at Concordia University (Intermedia/Cyberarts program) where he holds the rank of Full Professor.

His work has been presented in multiple international events, including Ars Electronica, ISEA, DEAF, Sonar, Art Futura, EMAF and Artec. He has been awarded the Vida 2.0 award (1999, Madrid), the Leprecon Award for Interactivity (1998, New York), the Prix Ars Electronica Distinction award (1996, Linz) and the International Digital Media Award (1996, Toronto). He has worked in collaboration with many canadian artists (including Edouard Lock, Robert Lepage, Gilles Maheu, LP Demers and Istvan Kantor). He was cofounder of the electronic pop music band Rational Youth with Tracy Howe in 1981.
.
.
.
.
.
.
.
source: fondation-langloisorg
Born in 1959, Bill Vorn is a media artist who has been working since 1992 in robotic art under the aegis of Real Noise from Artificial Life. He received a master’s degree in communications from the Université du Québec à Montréal (UQAM) in 1993 and a Ph.D. in communications from the same institution in 2001. He is teaching new media in the Faculty of Fine Arts at Concordia University, Montreal.

Vorn was a founding member of the “electro-rock” group Rational Youth in 1980 and in 1988 founded a post-production company called Artefact inc. Since the 1980s, Vorn has collaborated with many different artists, notably Louis-Philippe Demers, Robert Lepage, François Girard and Monty Cantsin, and has experimented with a variety of media. He has worked on performance, interactive installations, experimental soundtracks, soundtrack scores, and sound editing, creating components for film, video, and various other artistic projects.

Vorn’s successful collaboration with Louis-Philippe Demers extended over many years during which time they created several large-scale robotic, interactive installations and performances. These environments have consisted mainly of intelligent robotic components or entities that act and react in response to the audience. The primary focuses behind their installations are immersion, reactivity and interaction, with all three factors being influenced mainly by intense sound and light. Their approach has been to create “Spaces designed for machine populations and cybernetic organisms, societies which express metaphoric behaviours, spaces that are surrealistic immersive sites where viewers become both explorers and intruders. By creating this universe of faked realities loaded with “pain” and “groan,” the aim of this work is to induce empathy of the viewer towards these “characters” which are solely articulated metallic structures. Therefore, we want to underline the strength of the simulacra by the perversion of the perception of animats, which are neither animals nor humans, carried through the inevitable instinct of anthropomorphism and projection of internal sensations, a reflex triggered by any manifestation that challenges our senses.”

One of the first major creations produced by Vorn and Demers is Espace Vectoriel (1993). A sound and light installation based on the mathematical principals of vectors, the piece is composed of eight motorized tubular structures that are equipped with loudspeakers and a light source. The tubes move according to subtle movements of the spectator, enveloping the person in light and sound. One critic likened the experience to being the sole guest at your own personal rave.

In 1995, Vorn and Demers created both At the Edge of Chaos (1995) and The Frenchman Lake (1995), the former presented at Images du Futur 95 and the latter at ISEA 95 and the Sonambiente festival in Berlin in 1996. In 1996, in collaboration with the Ars Electronica Centre, the two produced a new interactive robotic installation, No Man’s Land (1996). Shown at Ars Electronica Festival 96, this installation comprises nine types of robot “species” that each portray specific behavioural characteristics. These robots are planted around the installation site, and visitors can walk around them, triggering unique actions from each species. In the Ars Electronica Festival 96 catalogue, Vorn and Demers describe the robotic entities in detail and their complex positioning within the exhibition environment, claiming that the organisms are “metaphors of natural societies: parasites, scavengers, colonies, herds, etc.” More complex in its installation and in the number of robots at play in the space, No Man’s Land expands on the duo’s previous work and foretells the extravagant environments to follow.

La Cour des Miracles (1997) was the next major interactive robotic installation that Vorn worked on in collaboration with Demers. Presented at ISEA 97 (Chicago, Illinois, U.S.A.), the Musée d’art contemporain de Montréal (Montreal, Quebec, Canada), V2_ Organisatie (Rotterdam, the Netherlands), the IndustrieProjekt festival (Brück, Germany) and the Musée de Soissons (Soissons, France) between 1997 and 1999, La Cour des Miracles was a sensorial attack by many robotic entities and pieces that inhabited space loudly and reacted convincingly to a visitor’s presence. Critic John Massier notes that:

“In a single, all-encompassing moment, chain-link fencing, scaffolding, sheet metal, oil drums, red theatre lights, strobe lights, smoke and an orchestra of howling, peeling, riotous noises (including moans, sobs and screams) collapse on the viewer. The looking glass has been broached. On the other side is a squalid industrial pit that must be negotiated by way of long, narrow corridors that wind through the space. Interspersed along the route are the inhabitants of La Cour des Miracles, 30 robotic entities that reel and stagger like mutant bastard children of the Terminator.”

As a solo artist, Vorn has also created unique installations and software. In 1996, he designed Life Tools, a set of software (MAX) tools using artificial life basic algorithm functions, which are downloadable from his Web site. In 1997, he produced Evil/Live 01 (1997), an interactive sound and light installation “based on The Game of Life, a cellular automaton invented by John Conway in 1970.”

The installation consists of a structure comprising 64 halogen lights and four speakers hung from a wall in the exhibition space. The patterns of the lights, which change constantly, are controlled by a computer programmed with The Game of Life principles. As users walk through the space, sensors capture their movements and this information then changes the sound and light patterns. This installation was presented at Art Rock 98 festival (Saint-Brieuc, France), Sonar 98 (Barcelona, Spain), and the Musiques en Scène festival (Lyon, France) in 1999. Vorn has also worked on another version of the piece, Evil/Live 02, that employs three sound and light structures rather than only one as in the first.

Recently, Vorn has begun a new collaboration with artist Simon Penny that is partly funded by the Daniel Langlois Foundation. The two artists will be working together to create bedlam, an installation exploring the creatures of artificial life.