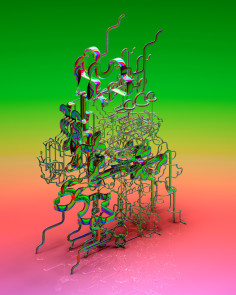 Best-known as one half of MSHR (the other half is Brenna Murphy), Cooper now unveils Shrine Gate Matrices, a brand new series of prints that depict sculptural instrument data signals as fluorescent worlds. As gets set to take over Portland’s Projection Museum starting next week, Cooper tells The Creators Project that, “the pieces in Shrine Gate Matrices are very inspired by generative electronic music systems and the sonic structures that they produce,” he continues, “I’m trying to navigate the connection between these generative systems and archetypal human designs, the psychedelic unconscious and algorithmic structures.“ The eye-catching virtual sculptures and shapes he creates are meant to be a formal embodiment of these ideas.

These printed artworks provide viewers with a tangible graphic visualization of the duo’s music, but also makes evident the link between all aspects of Cooper’s work. “One connection between the work in Shrine Gate Matrices and my music practice is that they use structural elements like feedback,” he says. Instrument designs, interactive sculptures, prints and obviously electronic music merge in a multidimensional and intensive work process.

“This was achieved by using luminant materials in the sculptures and placing them inside of infinitely reflective environments made of overlapping cylinders,” he says. ”Digital sculpture is also an essential part of my collaborative work in MSHR, which has informed my solo visual work deeply.” Thus, Cooper’s work creates back-and-forths through a simultaneously organic, technological, and mystical realm that continues humanity’s decades-long exploration of the boundaries between the virtual and the real.

“In making this work I was just trying to stay open and keep putting one virtual foot in front of the other. It’s all about maintaining the practice and the progressing the creative journey,” Cooper concludes.