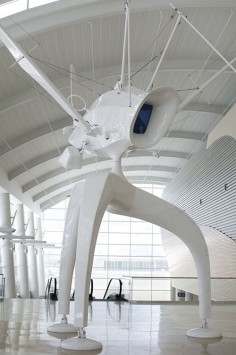 This huge sculpture is placed in California’s Mineta San Jose airport, where high-tech art welcomes the passengers. At the top of the escalator at the new Terminal B you will find Schuelke’s absurd machine. This giant three-legged sculpture explores the interactivity between humans and modern technology. It will quietly rotate with the aid of two propeller-tripped arms. And its ‘eye’ reveals images picked up from embedded cameras.

When entering the installation, the audience becomes part of the ‘system’ as the monitor react to the human element. It can see and track you as you walk around it. That’s why this big whit object goes by the name: Space Observer. The Space Observer was made in 2010. It consist out of GFK composite, which is glass reinforced plastic. But it also consists out of aluminium, steel, electronics, motors, LCD screens, cameras and car paint. It is 8,5 m / 28 ft. height and its working diameter is 10 m / 33 ft. To provide flexible functionality without full knowledge of future requirements, a second server is implemented using Amazon’s EC2 service. This server provides access to data about each piece including regular status-monitoring ‘heartbeats’. These ‘heartbeats’ are being send to the Art Cloud. Every active artwork can be monitored this way. I really like this design because it is so inventive. It is spatial modern a bit minimal and robotic. I think there is a good connection between the object and the airport. Because of the interaction with the persons around it, it really becomes alive. In total it gives a new atmosphere, where technology and design meets each other. This way it fits the whole new environment of the technical design industry. And last but not least, this design makes me want to go the airport to go and see!
.
.
.
.
.
.
.
source: schuelke

Bjoern Schuelke pursues a creative style that is equally influenced by modern abstraction and instruments of scientific measurement. The slow deliberate movements in his sculptures spatially consider mass and weight of form. Also influenced by the Dadaist tradition and Jean Tinguely, the theme of an absurd machine is key in Schuelke’s work. Playfully transforming live spatial energy into active responses, his objects experiment with solar panels, infrared surveillance, and propelled wind power. Many of his larger kinetic sculptures combine elements of surveillance technologies, robotics, interactive video and sound. Schuelke’s active sculptures question the way in which we interact with modern technology: on entering the installation site, the audience becomes part of the ‘system’ as the works (some freestanding, others suspended) monitor or react to the human element. (bitforms)
.
.
.
.
.
.
.
source: lebensart-koeln

Influenced by German sound artist Peter Vogel and Jean Tinguely’s kinetic sculptures, Björn Schülke creates complex viewer-activated machines that combine movement, surveillance, and sound. Equal parts art and science, Schülke’s works play on our relationship to technology, from the ominously-titled Drone #6 (2006), which appears to hover close to the ceiling and monitor movement below, to the playful oddity of Nervous (1999-2009), a wall-mounted, fluorescent orange ball of fur that shudders and emits robotic noises when approached.