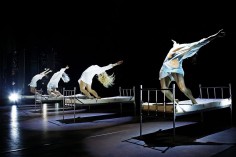 source: insanetourcouk
The classic story of One Flew Over the Cuckoo’s Nest is injected with a large dose of hip hop energy by Bounce. This exciting company is known for creating high energy, imaginative street-dance theatre, enjoying hit runs at both the Peacock Theatre and the Roundhouse.

In the confines of a psychiatric hospital, breakdance becomes a way of expressing freedom and rebelling against the iron rule of Nurse Ratched – who happens to be a ballet fan…

Inventive set design (including bungee-jumping breakdancers), film and choreography are mixed to produce a fast-paced show that is at times funny, at times moving, and always packed to the rafters with high-octane dance moves.Based on the play by Dale Wasserman & the novel by Ken Kesey.
.
.
.
.
.
.
.
source: brankopopovicblogspot
‘Insane in the brain’ by Bounce Streetdance Company is visiting Maastricht. A street-dance version of One Flew Over the Cuckoo’s Nest by Dale Wasserman. Based on the novel by Ken Kesey.

‘Insane in the Brain’ is a reworked producion of One Flew Over the Cuckoo’s Nest as a feast of stunning street dance. Injecting a healthy dose of contemporary styles fused with breathtaking hip hop moves. ‘Insane in the Brain’ features a pulsating soundtrack with cuts from Missy Elliot, Dizzee Rascal, Gotan Project, David Holmes and Cypress Hill. Inventive set design and choreography are mixed with film and multimedia sequences to produce a fast-paced show that is funny, moving and packed with high-octane dance.
.
.
.
.
.
.
.
source: insanetourcouk
Bounce was established in autumn ‘97. The company’s initial goal was for members to learn from each other and have fun, but we soon understood that the group had more potential. Eight and a half years have passed since then and time has moved fast.

It doesn’t seem that long ago since we knocked on Jan Zetterberg’s (Artistic Director, Dansens Hus, Stockholm, 1991 – 2003) door and said that we wanted to give a performance at Dansens Hus. We’d only trained together for a few months, so looking back, one can understand what Janne meant when he said that it was best if we planned the performance for the autumn program instead of rushing to get it ready for the spring. In his eyes we were pretty green!

RotRot, our first real show, premiered in October ’98. You could say that the performance was born out of chaos. We could spend an entire morning discussing how a step should really be danced. Another example is that only half of our specially sewn costumes turned up in a taxi minutes before our first dress rehearsal. The rest appeared just in time for the premiere. We performed our first three performances to a full house and danced like it was the last time we would ever dance. The response was enormous. Success was a fact and life as back-up dancers was a distant memory. Today, we look back on Rot both with pride and horror and think anyhow that a lot has happened over the years!

Freaky FlowAfter Freaky Flow, which we performed on our first major tour of Sweden, we were given the opportunity to perform in front of European audiences for 8 weeks at the fantastic Roundhouse in London. Bounce The Show was an overwhelming experience for all of us, a meeting with the hardcore business world. As we felt exploited by our English producer, we said no to the European tour we’d been offered. Everyone probably understands what a difficult decision that was to make; when your dream is just about to come true and you are forced to say no to keep your pride. Today, we know we made the right choice.

The result was that the producer hired English dancers, who have been on tour until quite recently in Germany, England, Switzerland, Holland and South Africa. But as always, something good generally comes out of something bad. We caught sight of Teneisha and Ryan, two awesome dancers who are now a part of this production.

Bounce vs. PetterBefore our Bounce vs. Petter production we took a longer ‘time out’ and after that performance we picked up steam again. We wanted to set the stakes high and when we talked about what we wanted to do we kept coming back to different films. In this way, you could say our next performance was inspired by the world of film and most of all robbery films. We were going to carry out a Robbery! At that time, The Score was our largest production. It featured dance behind large projections and was a success. After dancing 76 performances in Stockholm and touring the Nordic region, almost 90,000 people had seen the show.

The ScoreA lot has happened since we last performed at Dansens Hus, Stockholm. The Score was an impressive production in which we didn’t have that much contact with the audience. Now we wanted to do something else. We’d wanted to work with live music for a long time, so that was our new starting point. For the first time in Bounce history we had a Kick Off! It took place at Benke’s summer cottage on the Swedish west coast, where we stayed for 3 days and talked about what we wanted to do. We finally agreed on some sort of theme. It also struck us that our common denominator is an addiction to dance.

Bounce liveBounce live was about 7 dance-aholics. The premiere was on June 13, 2005 at Nalen in Stockholm. Performing in that old dance hall was something special, and the 5 magical musicians behind us made it even more so. Here, we recorded our first DVD of a performance, and it became the best selling music DVD for 2005. First time a dance group gets a gold record?

The tour continued through the autumn and at the same time we participated in TV3’s dance reality series Floorfiller.

Cool to see so much new talent emerging now that dance is so “trendy”…..yawn!
We have been doing this since ’97 and have seen a steady rise in interest and talent, people who have worked hard for many years. If the truth be known, Sweden has several really talented dancers who are not yet seen on TV, but you’ll for sure start noticing them in a few years.

Now it’s suddenly December and we realize that we have to get a move on with our new performance, if there’s going to be one. Especially as we’re one less at the moment as David Dalmo has taken a leave of absence. We held auditions in the early autumn and started preparing while we were on tour. But doing a performance of this size takes at least 6 months. Rehearsals with the new dancers start 7 weeks before the premiere and continue at least 4 weeks after the premiere. Then comes the first injury. One of the swings jumps in and we rehash the choreography. We continue rehearsing and when the new version is finally set, someone is usually overloaded with new parts. And so we redo it again…

Maybe it sounds like we feel sorry for ourselves. Not at all. Despite the fact – or perhaps because – we’ve known each other so long, we’ve had the most fun rehearsal period ever. We’ve taken new steps (clever!) and developed ourselves. That’s always been Bounce’s driving force – doing something new – which wouldn’t be possible without all the support from our fans.

On a final note, we’d like to take the opportunity to welcome our new dancers who’ve also contributed a lot to the ambiance.

This year we also premiered a new show called Caution! at an independent stage in Stockholm, Orionteatern. We have done 76 sold out performances and nearly with 38,000 people in the audience, you can call it a big success.

Bounce got Svenska Dagbladets Operaprize 2006 and 2008 Bounce was awarded with the Cullberg Prize.